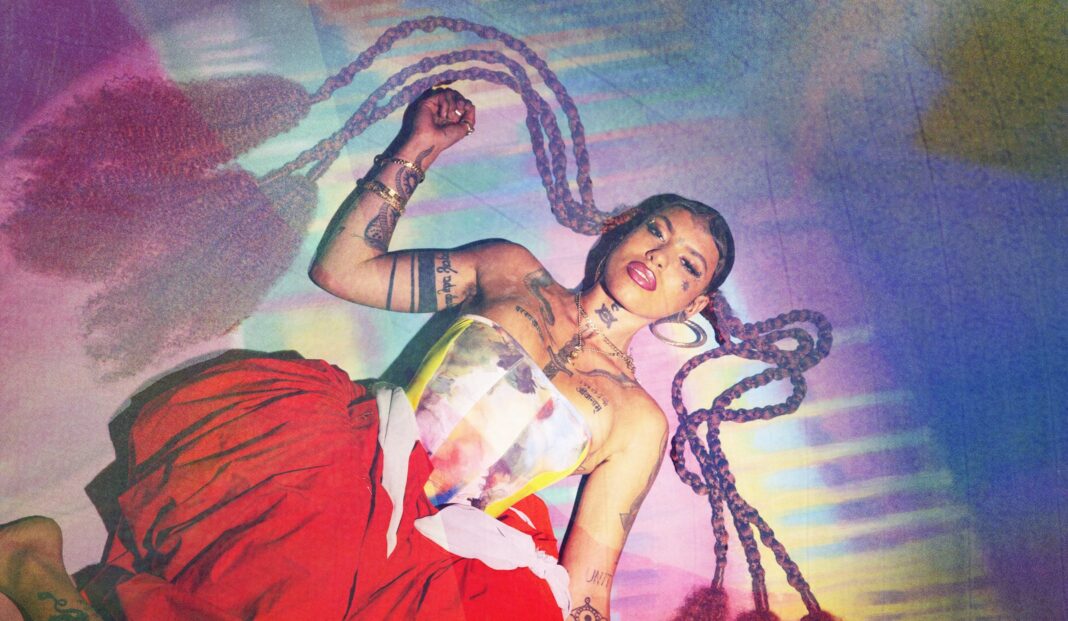 A groovy bus cruises the sunny streets of London, painted with swirling hippy fonts in psychedelic pink, purple, and neon green. No, it’s not the Scooby gang’s Mystery Machine, but the Sengmobile. Aboard the upper deck, singing songs from her debut album, a young woman: Greentea Peng.

So named for her band, the Seng Seng Family, Greentea Peng enlisted the Sengmobile to celebrate the release of ‘Man Made’. She recorded the album with the band last summer, deep in the English countryside: deep in more than just sunshine, but it paid off. The spell of psychedelic musical experimentation resulted in eighteen songs.

Greentea’s ascension through the music cosmos – from Mexican beach town rockstar to London psych-soul queen – is both justified and unsurprising. She’s supported Neneh Cherry, featured on The Streets’ comeback mixtape, and made the BBC Sound Of 2021 shortlist. But the hype doesn’t faze an artist who marches to the beat of her own cool, nonchalant, fuck-you drum.

That stance results in an album stamped with unique personality: punk anger and Hindu and Rasta spirituality, delivered via the improvised spirit of jazz, countercultural grooves, and Greentea’s own London voice. And somehow, the hour-long ‘Man Made’ never unravels. The record glides between smooth utterance (‘Dingaling’) and emotive delivery (‘Maya’), angry spits and lo-fi synth, neo-soul and jazz. A flute beguiles and hypnotizes on ‘Be Careful’, eventually dropping into a blissful lower tempo.

The reggae beat on ‘Free My People’ worms right under the skin, too – as does its politics. “You can’t hold us down with systems,” Greentea sings. She’s never hidden her anti-establishment attitude. Not in song: “This is for the youth that can’t bе silenced nor battered nor beaten / Though you try confine us / This is for your heart and not your mind / No man-made constructs, no divide,” she states on opener ‘Make Noise’. Nor in person. “Look how many young homeless people there are now, how many independent businesses are being shut down, how many people are struggling to pay their rent,” she pointed out in The Forty-Five’s May 2021 cover story chat.

But Greentea’s hedonism remains undented by outrage. She watches beloved neighbourhoods like Brixton and Dalston become whitewashed and gentrified – watches crime and corruption and social injustice unfurl at every turn – and retaliates with relish and wordplay: “Puppets permittin’ power, makin’ it impossible / Dutty politicians and wicked satellites / Just pawns on their board they willin’ to sacrifice”.

No wonder penultimate track ‘Sinner’ rips into some heated, heavy guitar. “Any sort of rebel music interests me,” Greentea says. Her late stepdad introduced her to heavy metal and punk, and closer ‘Jimtastic Blues’ raises a glass to his legacy, closing an album that perfectly soundtracks the hot grief summer of 2021.

A real Scooby snack of a record, ‘Man Made’ possesses the serene languor and eternal appetite of Shaggy Doo – thankfully with far more style. “We’ve got to fight for our right to party,” Greentea repeats at the album’s close. From her lips, the Beastie Boys’ anti-authority statement carries a lot more gravity. She means every word – and especially the last.