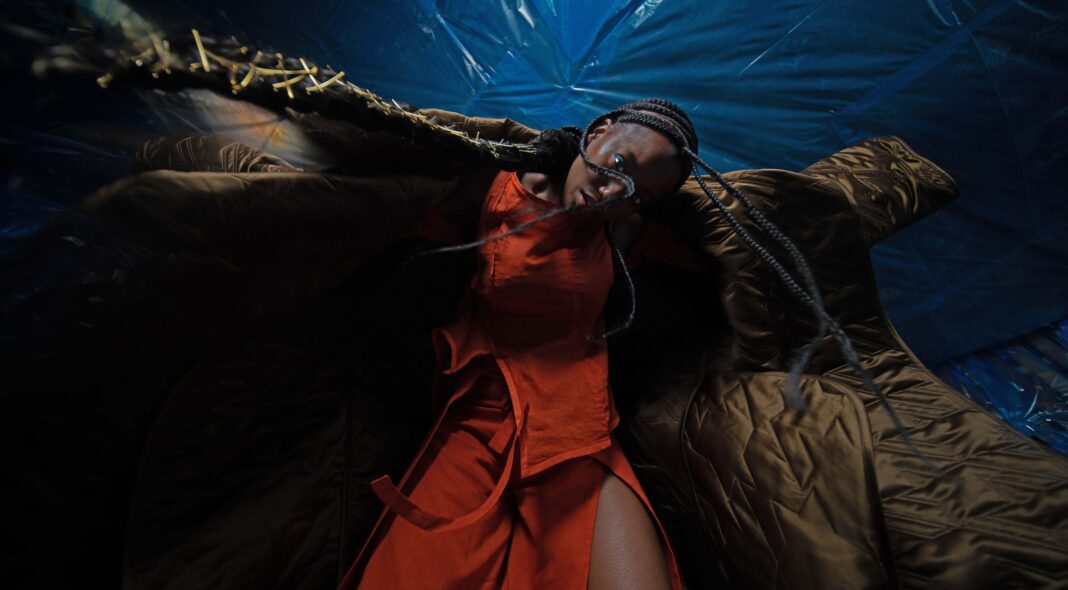 Denai Moore occupies a dark, stately throne on the cover of her third album, ‘Modern Dread’. The tendrils of her silver headpiece twist away to infinite lengths, implying a connection to the outer world as well as entrapment within it.

Even before the pandemic hit, life was hardly rosy. ‘Modern Dread’ took form amid global turmoil that the pandemic has thrown into sharp relief: political unrest, environmental crisis, information oversaturation, social isolation and insecurity. The album churns with feeling in a world of manufactured electronic sound. In a style sometimes akin to Caroline Polachek’s ‘Pang’, Moore applies what she describes as an “intentionally cold palette” to intensely emotional issues.

Imagery of environmental crisis throughout the record – hail, cascades, reaching the brink – create a sense of uncontrollable chaos, a concern with external conditions that stretches to our internal states too. In a digital world deluged with information, Moore declares, “shut me up, I’m oversharing.” She longs to ‘Turn Off The Radio’, to throw away her phone, to find someplace quiet and safe, to retreat to the peaceful memory of eating grapefruit on a porch.

The lyrical content inevitably bleeds into the music: as world events and flows of information whirl out of control, so do the songs, moving in spontaneous directions. Synths flicker like oppressive urban lights. The visceral, overwhelming noise of modern life is reflected in the abrupt stops and starts of the tracks, from the sudden ending of ‘Too Close’ to the Fiona Apple-esque opening of ‘Honour’. At points, the songs change tempo, different layers jostling for the lead. It’s an unpredictable listen, one that can occasionally seem jarring. Pop hooks scattered throughout, strongest on ‘Cascades’ and ‘Turn Off The Radio’ – a hint perhaps of Everything Everything’s Alex Robertshaw at the production helm – supply immediate footholds, but the album is held together by a daring electronic aesthetic that’s all Moore’s.

“I’ve tried to trace maps of new life here beyond me, still spinning circles like a noose,” Moore sings on penultimate track ‘Offer Me’, as if appraising the record. The deliberate use of “noose” is another signal that there is no escape from the evil of the world, and the solution might be to burn it all down, just as Moore burns down the divisions between genres. Sometimes an album with a strong identity gets trapped in its own sound. ‘Modern Dread’ instead achieves that rare thing, a coherent whole with no monotony. You have no idea where the songs will take you – which is exactly how the world feels right now too.