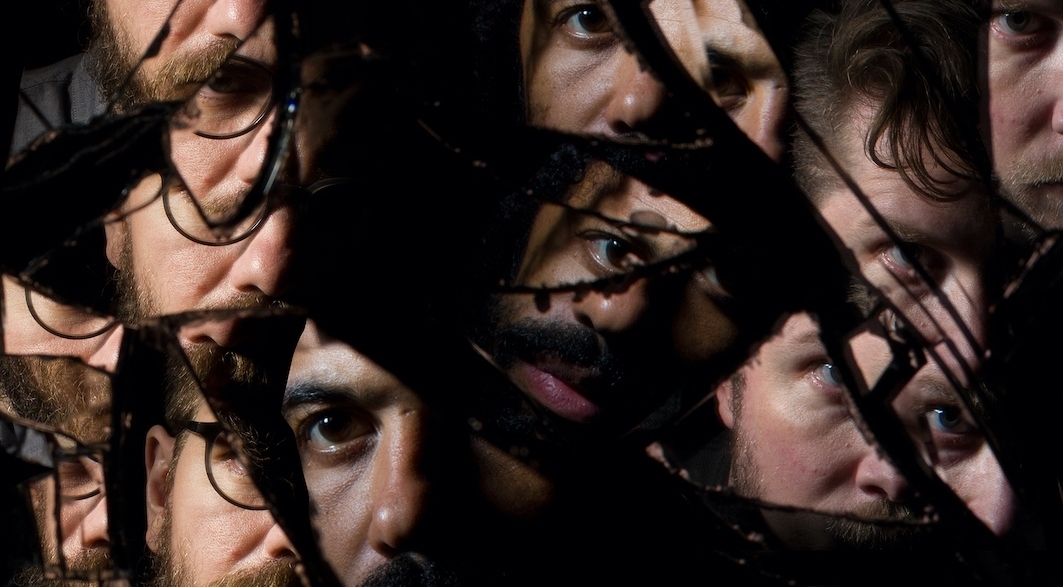 ‘Visions of Bodies Being Burned’ – clipping.’s fourth album – is the opposite of ASMR – unless you’re soothed by disconcerting creaks, jumps and actual ghosts. Like previous record, ‘There Existed an Addiction to Blood’, the first of clipping.’s horrorcore two-parter, this is no mere dusting of horror, but a plunge into its cold depths. Listen to the record lying on your bedroom floor, and you could be watching a scare movie with your eyes shut, or at an immersive art show. Listen on the bus and you’ll feel really strange. Listen walking the streets at night, and it’s like a grim, grown-up version of trick-or-treating.

Since 2014 the Californian hip-hop trio have taken clichés – whether of the hip-hop canon, space travel, or horror movies – to make radical political statements. MC Daveed Diggs found mainstream recognition as Jefferson and Lafayette in the original 2015 cast of Hamilton, a reclamation of American history continued on ‘Chapter 319’, clipping.’s acrid response to Black Lives Matter. Before that, 2016’s ‘Splendor & Misery’ packed a fictional utopian spaceship with slave work-songs and rap tropes of toughness and hyper-masculinity. On that album, clipping. used oral traditions of the past to control the imagination of the future. On ‘Visions’, they control the imagination of the present.

Readier than other hip-hop groups to claim fiction over autobiography, clipping. borrow their album title from horrorcore godfathers Geto Boys’ ‘Mind Playing Tricks On Me’ – “Candlesticks in the dark, visions of bodies being burned” – transforming real-life portraiture into gothic fantasy. They repeat the line on first single ‘Say The Name’, the street gangster gruesomely reworked as a horror monster. The track’s punchy boom bap paired with Diggs’ abnormally slow rapping (he’s notorious for his speed) is unnerving and yet addictive, and builds to a crashing, beautifully-layered coda that recalls the electronic work of These New Puritans and Aphex Twin. A similar thing happens at the end of ‘Pain Everyday’, but not before we hear Electronic Voice Phenomenon, aka the recorded sounds of ghosts. Here clipping. give a hokey notion a dark reality: the song’s ghost is a victim of lynching.

‘Visions’ exposes just the right amount of truth to prevent its horror theme becoming obvious or tasteless. ‘She Bad’ ticks off all the gothic cinema motifs – rusty gates, wind, blood moon, low fog, spiders, snakes – in a way that lets you know exactly what clipping. are up to: hinting that their supernatural landscape might be a fictional façade for something worse. They feed your subconscious with a terror that comes from collaborators (the abrasive noise of Ho99o9, the vengeful rap of Cam and China) as much as it comes from cropped beats that, like horror movie camerawork, create a dread-inciting, unpredictable pace.

And then: safety. Birdsong, trees, relief. A road. The final track on ‘Visions’ is an ambient composition composed by Yoko Ono, and after fifty minutes of being frightened alive, you really want to believe in it. But a glint of menace throughout the piece reminds you of the most chilling truth of all: nowhere is ever truly safe.

Horrorcore can be controversial, breeding emotional and physical violence, but clipping.’s immediate, harsh escapism says something fundamental about the need for escape in the first place. The supernatural realm they create constantly glitches at the edges, threatening to reveal the reality beneath. It’s the antithesis of a cosy self-care cocoon. ‘Visions of Bodies Being Burned’ demands you wake up to the full horror – of clipping.’s fictional world, and the real world behind it.