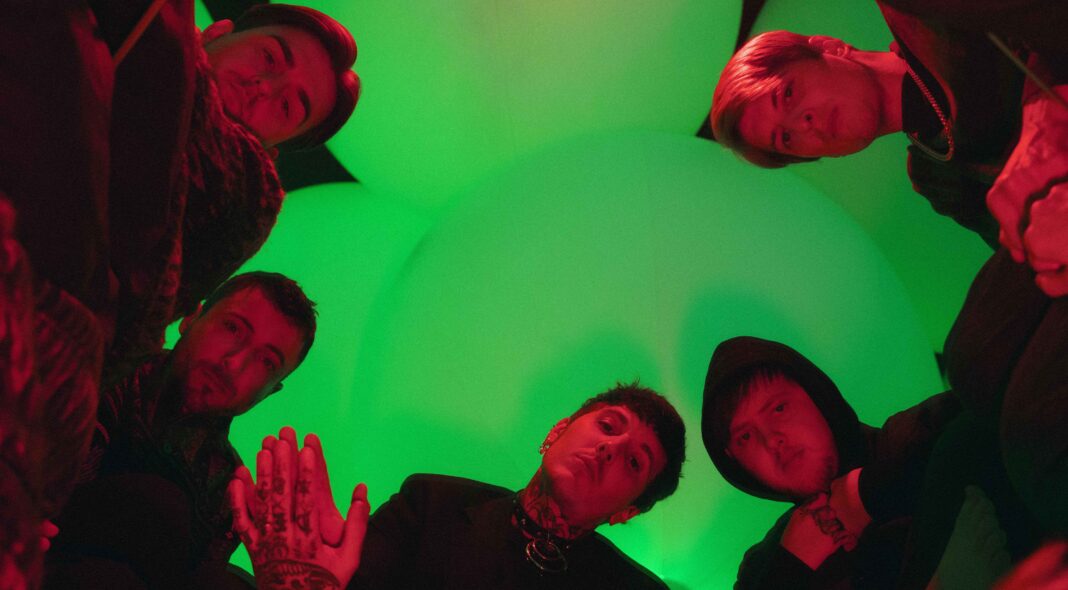 A mash-up of Bring Me The Horizon’s 2013 single ‘Can You Feel My Heart’ with Cardi B and Megan Thee Stallion’s ‘WAP’ – niftily dubbed ‘Can You Feel My WAP’ – went viral last weekend, and quite frankly had no business sounding as good as it did. The collision divided listeners: BMTH fans who considered it sacrilege (“fucking disgruntled,” as one put it), fans reluctant to admit it slapped, and unabashed enthusiasts (“there is no music after this!!”) – a division which, as it happens, almost reflects the BMTH fanbase.

BMTH have lusted after catchy hooks for a while, so it’s no surprise a hit like ‘WAP’ fits the poppier sound they’ve cultivated from their metalcore roots. The band have alienated purists with their advance towards a radio-friendly sound, their eyes seemingly on Linkin Park’s nu-metal crown. Yet new EP ‘POST HUMAN: SURVIVAL HORROR’ – first of a four-EP project – brings back a heavier sincerity. “The world doesn’t need light-hearted pop music right now,” said frontman Oli Sykes earlier this year, “it needs anthems for anger.”

Twenty-four seconds is all it takes for the record to fulfil noisy ambition. Sykes’ screaming vocals on opener ‘Dear Diary’ will go some way to satisfying the metalcore contingency, though nobody should expect a full retreat into old territory. But with guests including Babymetal and Evanescence’s Amy Lee, and video game composer Mick Gordon drafted in to help produce a post-apocalyptic, world-is-burning vision, ‘POST HUMAN’ is no elongated pop party but an anti-escapist battle cry that screeches in at just under thirty minutes.

“Please remain calm, the end has arrived / We cannot save you, enjoy the ride / This is the moment you’ve been waiting for / Don’t call it a warning, call it a war.” If ‘Sempiternal’s ‘Can You Feel My Heart’ asked “can you see the dark?”, ‘POST HUMAN’s second track ‘Parasite Eve’ answers with a firm yes. Sykes’ call-to-arms aside, the song’s opening Bulgarian folk choir sample provides the kind of innovative poetic lyricism BMTH often lacks. The vocals translate roughly to, “Has put his cap askew, just like this, just like that / To the one side, to the other side, just like this, just like that,” a panicky off-kilter image of nightmares, abstract terror that’s hard to relate and hard to explain. Such inclusions mean that despite tracks like ‘1×1’ that owe too much to other bands, ‘POST HUMAN’ communicates its chosen mood – adrenaline-fuelled fear – with total success.

‘POST HUMAN’ really punches, though, when its female guests are allowed full throttle. Babymetal take ‘Kingslayer’ to a whole new level of infectious, while Amy Lee provides a darkly emotive close on scene-kid titled ‘One Day The Only Butterflies Left Will Be In Your Chest As You March To Your Death’. An energy simmers just below the surface all the way through, and just as you’re convinced it’s about to rip – the song is over. So is the record, and you’re left hungry, a stimulated appetite that feeds nicely into the promise of three more EPs.

Oli Sykes calls ‘POST HUMAN’ “the sonic equivalent of a riot”. Art in 2020 seems split between offering escape from reality or facing the world head-on. Here, Bring Me The Horizon somehow do both. Their video-game universe confronts the emotions generated by this year’s realities. Whether they take advantage of the world’s troubles in the name of catchy sensationalism, or provide a much-needed outlet for anger, is up for debate. What’s certain is that it’s risky to ride the emo-by-numbers nostalgia wave too hard, given that era of listeners are now adults in a world that actually lives up a little – a lot – to their teenage angst. But hey – if it gets heavy, you can always just hit replay on ‘Can You Feel My WAP’.