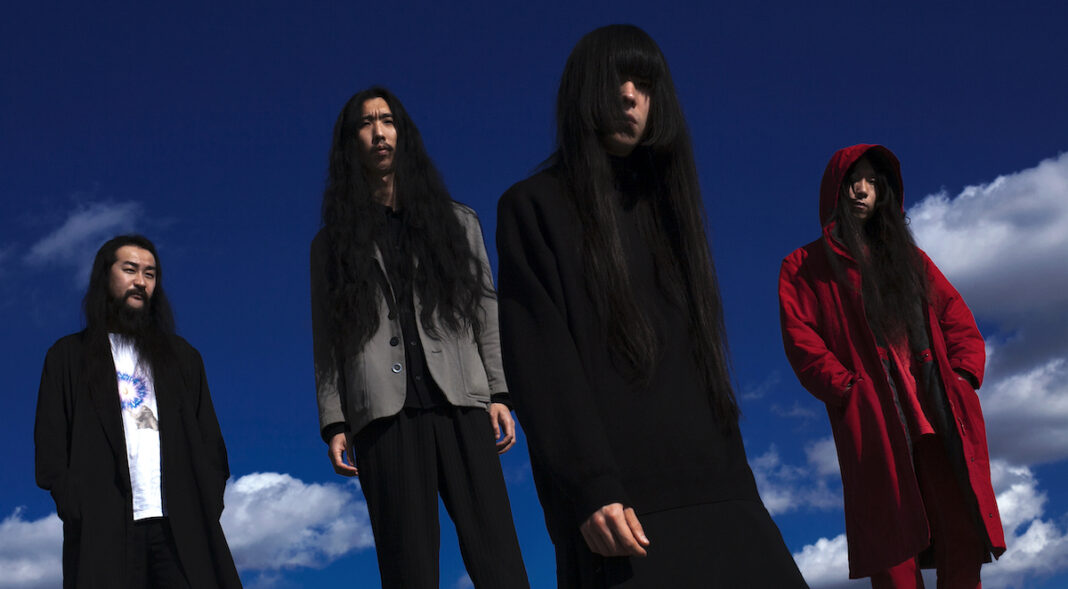 Since the awakened dawn in which humanity discovered that accumulating together in groups centred around instruments, can create genuine historical impact, there have been many an attempt at defining what it means to be a “Rock n’ Roll Star”. While some paved the way for imagination by route of revival, taking inspiration from our past, for others, the existence of music as a construct or capture of time, has never been, and simply won’t ever be, enough.

As Bobby Gillespie once said, “For rock n’ roll to be relevant again, it has to be reinvented.” Welcome Bo Ningen. A band of interwoven fringes, be it their tendency towards the peripherals of cross-genre reimaginings or, the literal follicles growing out of the identifiably mind-melting heads of four dudes, with roots both in London and, their native Japan; four studio records in but seemingly no less stirred, their timeless ‘prog’ and disparate yearning for advancement, bridges the structural elements of contemporary listening to create a wholly unique, space within time.

In dissembling evolution to birth change, their latest offering ‘Sudden Fictions’ (their first in eight years and via label, Alcopop!) is a record of which for forty-minutes straight, doesn’t strive to relate to nor, disparate the band’s established legacy but rather, seeks to present an “alternative” state of hyper-existential-reality to the Bo Ningen experience.

There’s no questioning that here, Bo Ningen have found their drum-debossed calling. Growing out of a psych-foiled, Pandora’s Box of paradoxical nature and garage design, ‘Sudden Fictions’ roams within a permanent state of in-between evanescence; questioning what it means to be an alternative-rock band, trailblazing as a fluctuating system of functioning discord and culturally experimental rhythms.

Noting that for this band, the mindset of “nonsense makes total sense” does indeed, carry meaning when placed into the context of sudden, fictional chaos. Tracks such as ‘You Make A Mark Like A Calf Branding’ thrive under the identifiable repetition of defeat; reinventing the very wheel of conversation in which the juxtaposition of Japanese and English, much like the Scandi tongue of Sigur Ros, flows as a transcription of improvisation in a tale to which language, is an exploratory outlet for vocalist and bassist Taigen Kawabe’s personal development.

Standout number ‘Riff’, is archaically anarchist. Orchestrally rampant until the very foundations of which Bo Ningen build upon, are but a back-alley entrance to a collection of intuitively deconstructed scrawl, if ‘Zankoko’ plays out as the subversion substitute to ‘Holy Fire’ era Foals, ‘Riff’, bites back as un-re-creatable sprawled calibre.

Where Japanese composer Toru Takemitsu strove to confront silence, Bo Ningen seek to drill mindful havoc and they do so with the entrenched support, of actually being a pretty fucking good at what they do. With an approved nod from featured accomplice, Bobby Gillespie on ‘Minimal’- the closest the group have come so far to anything remotely stripped-back (if assistance from an O.G, primordial screamer could ever achieve such), it takes guts to aim spatial ammunition higher than the sun and yet Bo Ningen are undoubtedly, a matter-orbiting planet of their own creation.

In a world of upheaval, ‘Sudden Fictions’ relentlessly breaks barriers and is an unparalleled hurdle, from a band who at all times, recognise the meaning behind their actions and spark difference.