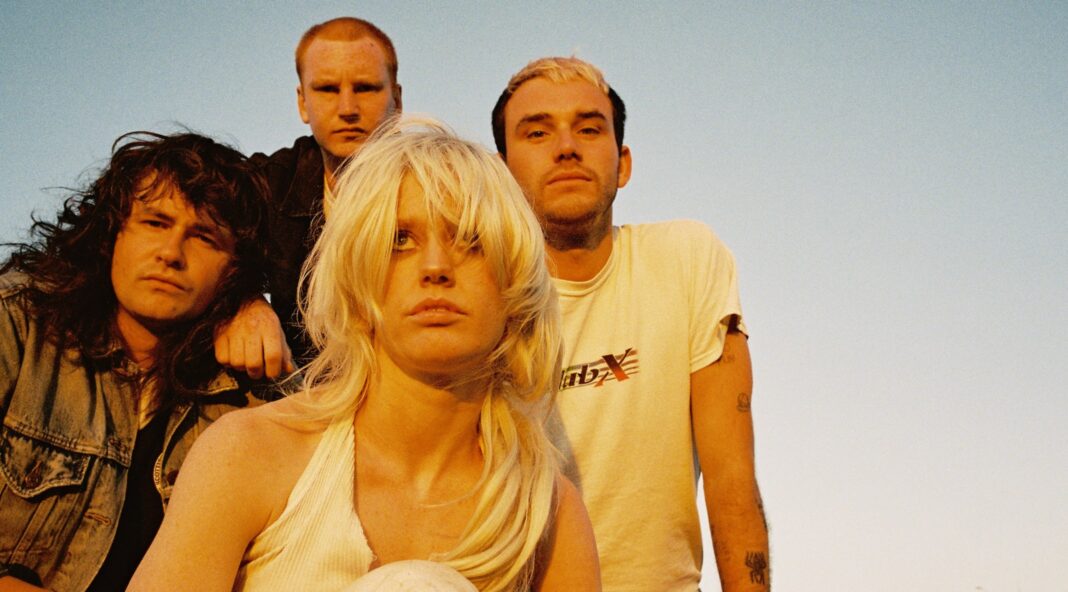 “Don’t fence me in!” demands Amy Taylor, Amyl and The Sniffers’ coiled spring of a frontwoman, two-thirds of the way through their second album. Yet at first scan, you might think Taylor’s railing against the sonic restraints of her own band. ‘Comfort To Me’ maintains the turbo-charged, fast and loose outlook of the Australian rockers’ acclaimed 2019 self-titled debut – albeit streamlined, as if they’ve hit the gym – trading on a familiar currency of riffs and refrains.

Listen closer, however, and the new record isn’t quite so fenced in by the band’s seventies pub-punk sound. “I like elements of everyone and everything,” Taylor continues, the teasing cadence of the last word almost Dylanesque. And while there’s nothing radical about a punk band preaching non-conformity, the snarling guitars, rap phrasing, and short sharp tracks on ‘Comfort To Me’ sit at odds with newly heightened emotion that tempers some of the raucousness.

“It’s a Mitsubishi Lancer going slightly over the speed limit in a school zone,” Taylor describes ‘Comfort To Me’. “It’s realising how good it is to wear track pants in bed.  It’s having someone who wants to cook you dinner when you’re really shattered. It’s me shadow-boxing on stage, covered in sweat, instead of sitting quietly in the corner.”

For a band with a reputation for wild live shows – Taylor’s often dubbed a female Iggy Pop –  and a determination to take nothing too seriously, to slow down and show some emotion is no mean feat. And on the first few tracks of ‘Comfort To Me’, the sleeves remain firmly rolled up, no heart in sight. Opener ‘Guided By Angels’ sets up the rest of the album via repetitive, galvanising lyrics – “I’ve got plenty of energy / it’s my currency” – and a wall of crunching guitar. The infectious ‘Freaks To The Front’, with a refrain born straight out of a mosh pit, channels the unapologetic spirit of Janis Joplin, while the heavier ‘Choices’ blurs into the chanting terrain of Patti Smith’s ‘Horses’.

Fifth track ‘Hertz’, however introduces some thoroughly un-punk concepts. Driving to the beach with your lover? The breeze in your hair? A sunset?! But with gruff, fuzzy guitar, this is the most pissed-off love song you’ve ever heard – as if Taylor is annoyed at herself for feeling soppy. Meanwhile, ‘Maggot’ could be the reply to a love letter written by Viagra Boys; makes sense, given Taylor appeared on their latest album, on a menacing cover of John Prine’s duet ‘In Spite Of Ourselves’.

Just as you’re beginning to flag under the constant barrage of yells and riffs, there’s some vulnerable introspection – “wish I could love me for all of my flaws / just like I love you for yours,” Taylor admits on ‘No More Tears’ – and a few political pleas. ‘Capital’, inspired by Yuval Noah Harari’s ‘Sapiens’, confronts Australia’s bushfires, drought, and Indigenous inequality. Meanwhile, the slower, grungier ‘Knifey’, a sonic outlier, begs for the simple freedom of walking alone without danger.

But the album ends on a recognisably noisy note, the final three tracks led by ‘Don’t Need A Cunt’: ninety seconds of unadulterated, accelerated rock and roll, like a fifties jukebox having a midlife crisis. You want a big drink of water or something, after listening to ‘Comfort To Me’ but for those seeking the manic, mulletted energy of Amyl and the Sniffers’ debut, and something that pokes a little deeper at pub rock, there’s plenty here to satisfy.