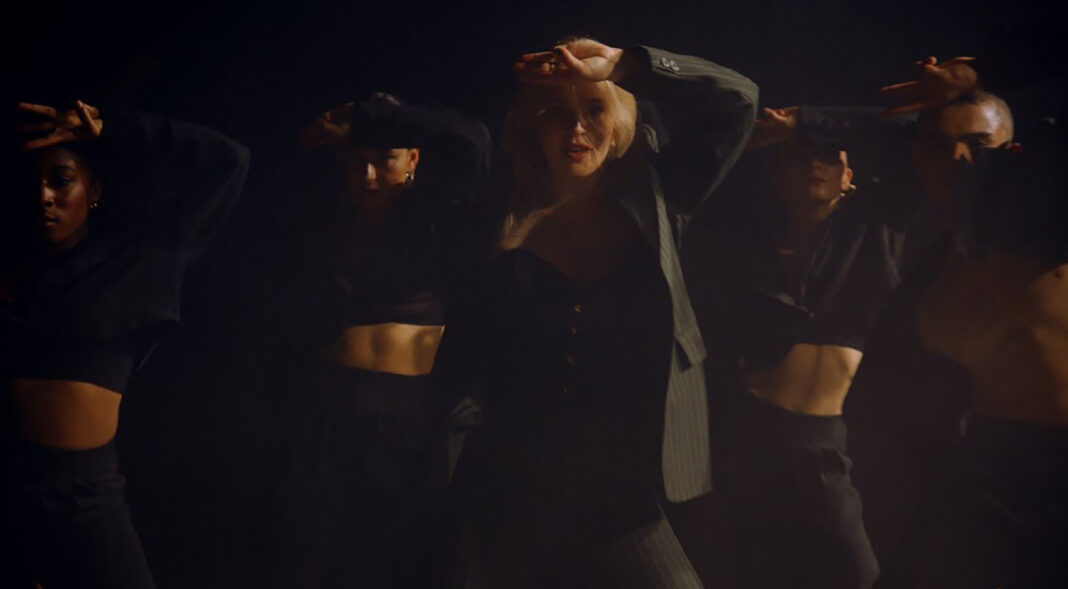 Every Self Esteem release feels like a capital E Event of late. From music to visuals to pure sentiment, the title track from her second record, ‘Prioritise Pleasure’ is instantly anthemic, making for a perfect follow-up to the acerbic, spoken word vulnerability of ‘I Do This All The Time’. Shot on stage at The Almeida, the video sees Self Esteem aka Rebecca Lucy Taylor in a corset and pinstripe suit, channelling her inner ‘Blond Ambition’ Madonna with slick choreography. She’s defiant, reflective and vibrant – a celebration of self that might be long overdue: “Sorry to my parents for the lyric “shave my pussy, that’s just for me” but I think it’s maybe my finest hour!”

Angel Olsen role-playing as a New Romantic and releasing an entire EP of 80s covers? Bloody glorious. And with that, the first release from said EP, ‘Aisles’, is a shadowy, sleepy take on the disco classic ‘Gloria’, like sticking a record on at 33 RPM and accidentally striking gold. A far cry from the toothless Whitney Houston covers on Love Island, the track is awash with textured synths and eerie vocals that – in true Olsen fashion – reaches an impeccably orchestrated climax. One to haunt the neon aisles of a forgotten supermarket at midnight.

Quite easily the coolest DJ in the world, Peggy Gou is back with ‘I Go’ – an ode to the dance music of the 90s that shimmers with the promise of a normal – dare I say, exciting – summer. The South Korean DJ is now based in Berlin after a spell in the UK at the London College of Fashion and ‘I Go’ carries a map of the places she’s lived in and the times she wishes she lived through: the illustrious nightclub culture in Berlin, raving in the UK in the 90s, and that same rave culture that didn’t exist for Gou as a teenager living in Korea. It’s a culture she’s now reimagining in style.

Even though societal expectations around gender expression are continuing to shift in a positive direction, it quite possibly never stops being a bit of a mindfuck. With light, woozy guitars as a backdrop, dexter – the 18-year-old from South West London who’s already caught the ear of Radio 1’s Annie Mac and Spotify’s Our Generation playlist – works through her feelings with a sweet matter-of-factness. She entertains a series of ‘what ifs’, wondering aloud if swapping her baggy tees for mini skirts and red lipstick would change others’ perception of her, before settling on self-acceptance: “Doesn’t matter ‘cause I like me anyway.” dexter’s debut EP (and vibe), ‘I Do Love A Good Sandwich’, drops on August 4.

Too often, football is co-opted to justify the worst of behaviours and attitudes, but if the past few weeks at the Euros have reminded us of anything, it’s of the beautiful game’s almost miraculous ability to delight and forge a sense of belonging where perhaps there was none. That’s the premise of For Those I Love’s latest music video for his track, ‘To Have You’, depicting a day in the life of David Balfe’s beloved Shelbourne FC in all its beautiful everyday simplicity, with snapshots of Dublin and all the people who make up a football club – from the players and coaches to the sleepy kid in the stands. The track itself, which samples both 70s classic ‘Everything I Own’ and snippets from philosopher Jacques Lacan, shares that grounded affection and though “peace and utter misery” makes for an unlikely dancefloor hit, it’s characteristic of For Those I Love’s poignant debut which received 5 stars from us earlier in the year.

Nao – ‘And Then Life Was Beautiful’ review: a lush, confident reset for one of Britain’s most distinctive voices