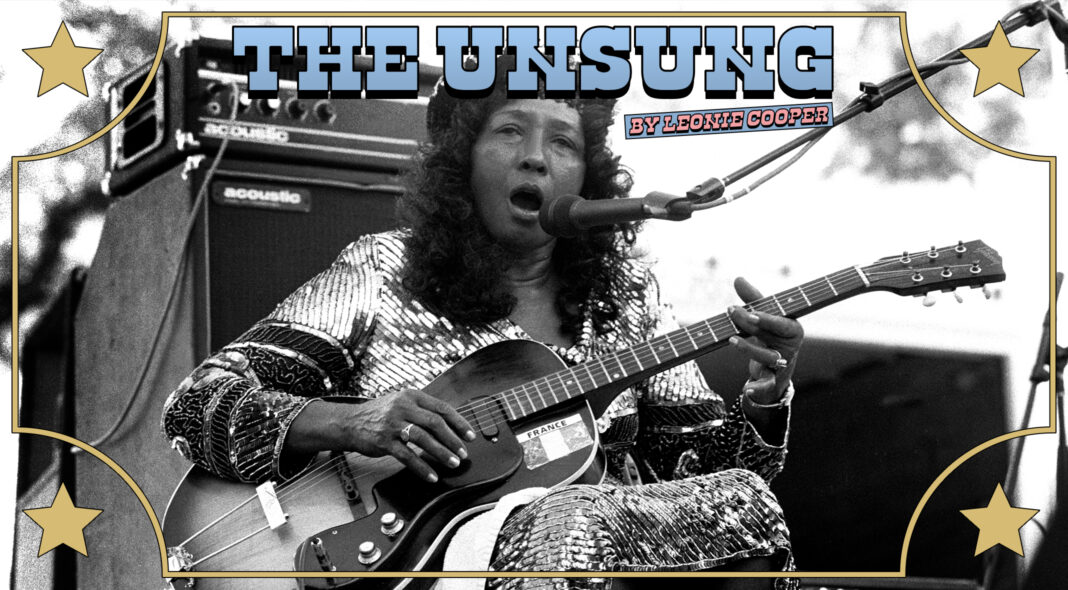 When blues pioneer Jessie Mae Hemphill finally found fame in the 1980s, she wasn’t hard to spot. By then she was almost 60, but Jessie’s fabulous stage wear would give The Cramps’ high priestess of animal print, Poison Ivy, a run for her money. Singing her throaty, stripped back tales of tears, trains and hard times, you’d find Jessie in leopard leggings and a leather cowboy hat topped off with the kind of smile that seemed to suggest she was having the time of her life. There’d also be a pair of high, high heels thumping down on a pedal connected to a tambourine – or she’d be hammering away at the Choctaw leg bells that referenced her Native American roots – giving her straight-up stories of low-down men an irresistible shimmer. If there were any sequins knocking about, or perhaps a shaggy fur coat, she’d throw those on too.

Some might say that with such a lavish look she was making up for lost time. Born in Northern Mississippi in 1923, the blues ran deep through Jessie’s veins, but for decades her free-spirited take on the Delta sound was heard by relatively few people. Her grandfather was blind bandleader and multi-instrumentalist Sid Hemphill – the son of a fiddle-playing former slave – who was tracked down by famed field recordist Alan Lomax after he heard on the folklore grapevine that Sid was possibly the greatest player in the world. Lomax was duly impressed, recording him in 1942 and returning in 1959, four years before Sid’s death. Sid’s vital sounds now sit in the American Library of Congress.

From childhood, Jessie would play snare and bass drum alongside her grandfather at informal family gatherings. She first picked up a guitar when she was seven, teaching herself on a single-string ‘diddley-bow’, joining the likes of her aunt, fellow blues musician Rosa Lee Hill, in the family tradition. Yet this music rarely entertained more than the Hemphills and their hill country neighbours at local picnics and get-togethers. Jessie would occasionally rock up for a set in various bars across Memphis in the 1950s, but it wasn’t until the late 1970s that she would start to get the attention she so deserved for her stripped back and country-rooted style.

It would be another ethnomusicologist in the Lomax mould who would realise the importance of Jessie Mae Hemphill. David Evans was working at the University of Memphis when he encouraged Jessie to build up a collection of her own material. With over half a century of living under her belt, the tales came pouring out, and in 1981 her debut album, ‘She-Wolf’, was released. A pounding, compelling thing driven by Jessie’s rhythmic, twanging electric guitar, it featured the perfectly audacious ‘Married Man Blues’ (“I got something to tell you babe/I don’t want you to tell your wife”) as well as the thumping title track, which casts Jessie as Howlin’ Wolf in silver stilettos. Then there’s the addictively sorrowful ‘Standing In My Doorway Crying’, which Jessie told her friend Cree McCree was written when she’d had her heart broken. “I said I’m gonna make me a record and get on away from him,” explained Jessie. “And I went to town and bought me a mic and and amp. I already had my guitar. And I went back home, and when I got ‘Standing in the Doorway Crying’ goin’, I played it all night. ‘Til the sun rose, girl, I picked it all night. Drinkin’ coffee all night and played it all night. And I said I know this gonna be a record.”

Later in the decade Jessie would tour the US and Europe and after decades of obscurity, received one of the highest honours in the roots music world, named the best traditional female blues artist at what was then known as W. C. Handy Awards (now the Blues Music Awards) in 1987 and 1988.

In 1993 a stroke stopped Jessie from playing guitar but she continued to sing until her death in 2006, and two years later Cat Power would bring Jessie’s unique sound to a wider audience when she covered ‘Lord, Help the Poor & Needy’ on 2008’s ‘Jukebox’.

Jessie Mae Hemphill’s own final release came in 2004, a rousing, collaborative collection of spirituals called ‘Dare You To Do It Again’ in which you can hear that smile – not to mention the occasional cackle of joy – blasting straight through the speakers.