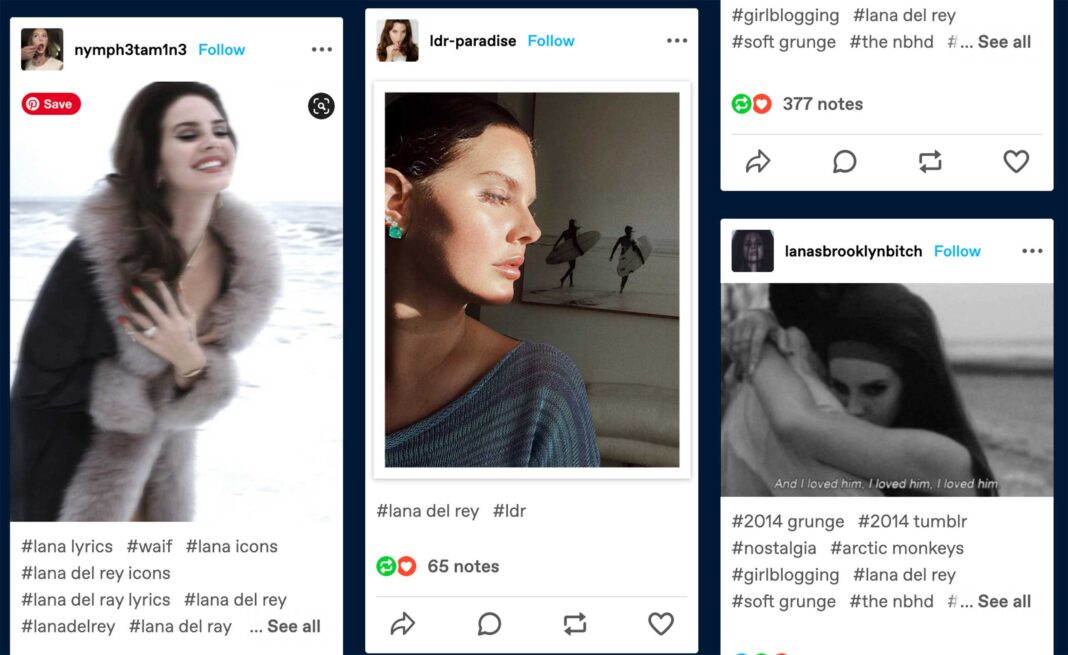 If you were on Tumblr in the early 2010s, you probably remember the GIFs. Lana Del Rey pouting her way through ‘Video Games.’ The 1975’s logo flickering in black and white. Marina and the Diamonds with a heart-shaped cheek tattoo and lashings of mascara. Each image was a potential portal into your next teenage obsession. By the time these artists released their generation-defining records, their fan bases were already well established, as much in response to each artist’s singular aesthetics as their moody tracks.

In 2012 Tumblr was a thriving community where fans could be found to span thousands of different interests. It was where you could go after school to talk to people who loved the same music as you, even if no one you knew IRL shared the same obsessions. While sites like last.fm, Soundcloud and YouTube continued to be popular platforms for finding new music, Tumblr had a curated visual element that gave fans the space to expand on each artist and album’s aesthetic universe. If it wasn’t enough to just listen to the record, you could dive deeper into your favourite band’s world by turning your blog into a mood board that looked like their album sounded. Jessie, 27, remembers discovering The 1975 through Tumblr in her first year of university. She associated the group with “a minimalist moody aesthetic. Lots of people were reposting images and GIFs with no context other than the name, so it was like is this a band? A TV show? Performance art? Or what?”

A decade on, it would be hard to find someone who hasn’t heard of The 1975. Many former Tumblr icons have gone on to become global superstars. That’s one reason why so many teenagers are nostalgic for that era today. You only have to scroll through TikTok to see teens romanticising the music and aesthetics of Tumblr in the early 2010s. “I wish I’d been part of the scene then,” says the 1975 fan, Serena, 16. “It would’ve been cool to be a fan before they got really big, and I love that black and white Tumblr aesthetic with leather jackets and Docs.”

But it’s not just people who missed it the first time around who are feeling nostalgic. You’re just as likely to find TikToks made by users in their early 20s reminiscing over what they wore and what they listened to at the time. For many, the era coincided with that transformative period as a teen when you feel like you become a real person for the first time with your own interests and personal style. Baryn, 24, describes his discovery of Marina and the Diamonds through Tumblr as his “teen awakening. I was just coming to terms with being a young gay teenager in a quiet town in the countryside. In a way, I took on the Electra Heart persona – being “the only gay in your village” gives you the chance to be a ‘homewrecker’, but you’re also an ‘idle teen’ wanting better things than the life you live. I was a typical Tumblr fan who reblogged everything from Marina and even ran a masterpost blog for people to archive her music, leaks and all.”

For creative producer Gabriella, 30, finding Grimes on Tumblr in 2012 was a similarly life-changing moment. “After getting into her music, I cut my bangs severely short. I also tried an undercut, got really into fingerless gloves, and tried combining clothes in surprising ways that didn’t seem like they should go together. I was also inspired to learn to use Ableton because of a tutorial she posted on Tumblr. Now I do sound production as part of my job and make music as a hobby.”

“I followed her Tumblr blog and her partner’s,” Gabriella continues. “She was really funny on Tumblr. I loved her post about serving mint water to guests, with an unintentionally hilarious photo of her with limp leaf fragments in a cup.” In 2012 Grimes used Tumblr to share fan art, post about her life and write in-depth responses to questions submitted by fans. She spoke about her music, her past and her mental health. Frank Ocean also used the platform as a personal blog in 2012. It’s where he posted a heartfelt letter the evening before the release of ‘Channel Orange’ where he opened up about his sexuality. At the time, Tumblr felt like a place where artists could express themselves authentically and speak directly to their fans.

Alongside this, aesthetic communities were springing up where the clothes and the look were just as important as the music. When Lisa first got Tumblr she was 12 and fell into what she calls the “Arctic Monkeys/The 1975/Joy Division/The Strokes aesthetic.” She was drawn to the look first and the music came later. “The girl who helped me make my first Tumblr told me to decide on an aesthetic so I could gain as many followers as possible,” she says, “and this was the aesthetic that was most attractive to me.” But it wasn’t until a few years later that her cousin got her into the music following the release of ‘R U Mine?’ “I was visiting my cousin in upstate New York, and she was driving us to the movies in her sleepy snow-covered town. That first ‘bowwwwwwwww’ of the guitar came on, and she cranked the music, saying, ‘You’re going to love this song!’ and started screaming along to the first verse. It sounded exactly like my Tumblr, the aesthetic I always wanted to embody. I asked her what it was, and she said, ‘You’ve only been reblogging their content on Tumblr for years, it’s the Arctic Monkeys!’”

Lisa’s music taste and personal style is influenced by Tumblr and particularly the aesthetic of Arctic Monkeys Tumblr – think leather jackets, fishnets and band tees –  to this day. “I strive to dress like the sound of Arctic Monkeys, and of course I want to be Arabella,” she says. “I kind of like that we don’t know who exactly Arabella is. She’s kind of a mythical figure that I can make my own.” The mythical Arabella has found a new spiritual home on TikTok in videos about the “rock star girlfriend” aesthetic where users make montages of ‘It’ girls like Kate Moss, Suki Waterhouse and Alexa Chung soundtracked by songs from ‘AM’. Similarly, sad girl Tumblr queen Lana Del Rey could be seen to have spearheaded the movement to “romanticise your own life” before it became a TikTok trend, with some videos on the app looking like they could have come straight from a Del Rey music video.

Since the golden age of Tumblr, artists whose fanbases dominated the platform have gone through several transformations, not to mention controversies. Grimes has traded Tumblr for TikTok and heartfelt interactions with fans for bizarre economic theories. Marina and the Diamonds has shed her alter ego, now just going by MARINA. But every artist has continued to make waves in the alt music scene and their music and style continue to have a strong influence on culture at large. Olivia Rodrigo largely owes her aesthetic to her frequent collaboration with photographer Petra Collins whose feminist, ethereal imagery was huge on Tumblr and Billie Eilish cites Tumblr darlings Lana Del Rey and Marina and the Diamonds as two of her biggest influences. The Tumblr aesthetic might be back, but it never really went away. Classic 2012 albums like ‘Born To Die’, ‘Visions’ and ‘Channel Orange’ sound as fresh today as they did 10 years ago. At the same time, there’s comfort in nostalgia especially after such a turbulent two years. So, dust off your oversized denim jacket, put your Arctic Monkeys records on and log back into Tumblr.