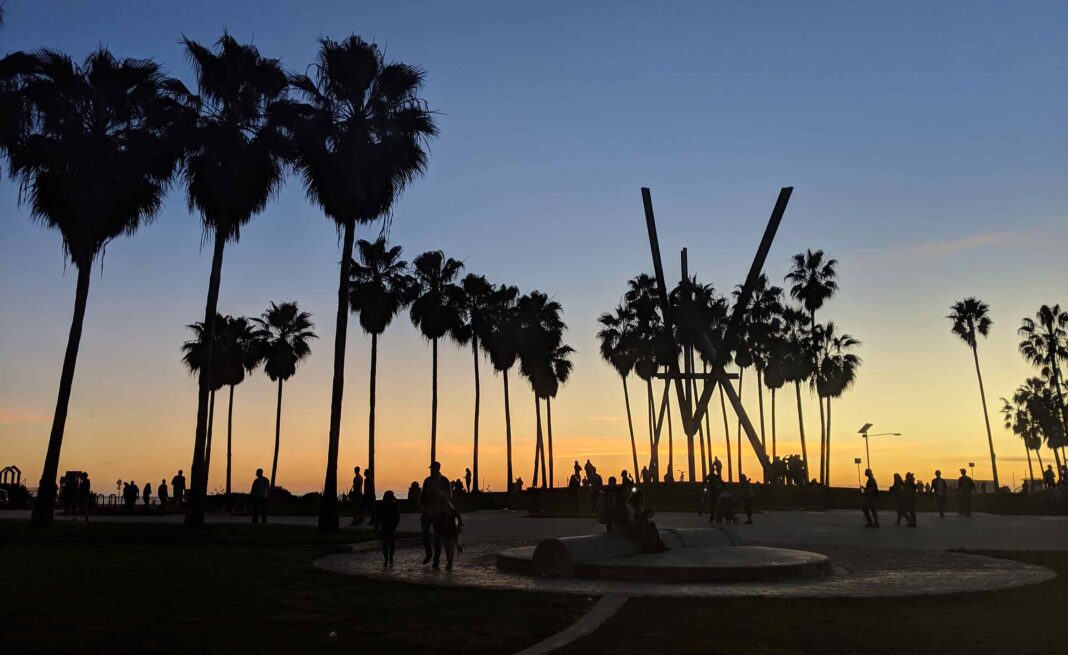 Something magical happens on Los Angeles’ fault lines. A creative hub for movies, tech and music, some of the world’s best artists have chosen LA as their home. The city itself has been an inspiration to many of these musical greats, using the streets and sunshine of LA as their muse. From the Laurel Canyon set to Kendrick’s Compton rap, these are the sounds of the City of Angels: it’s the best songs about Los Angeles.

Jim Morrison is wondering if you are a “lucky little lady in the city of light” on this ominous bluesy number about having “little girls” in different locales. Hopefully not too little, Jim.

King of the eastside, Elliot Smith, is so synonymous with the city, his music is felt down every palm-lined boulevard. Murals adorn the streets, his famed ‘Figure 8’ album cover was shot on Sunset and on ‘LA’, Smith expresses how things often look different in the cold light of day.

Wolf Alice‘s trajectory has been fairly steep. On ‘Delicious Things’, singer Ellie Rowsell talks of the impossible draw of new-found fame and Hollywood but how sometimes, despite all the glitz and glamour, you sometimes just need to call your mum.

‘Scott Street’, is named after a real street in LA – which is actually called ‘Scott Avenue’ – and runs from Dodger Stadium through Echo Park. The track is co-written with Phoebe Bridgers‘ bandmate Marshall Vore who Pheobe used to date.

The song that put NWA on the map, there’s no denying Easy-E, Dre, Ice Cube and MC Ren’s Cali roots.

For someone originally from the East Coast, Lana Del Rey sure does love LA. On ‘Venice Bitch’, she conjures more classic Americana as she sits on the stoop, waiting for her man.

The ultimate song about LA, this Cali anthem will be played in the city until the ends of time – and rightly so.

Lorde is a New Zealander through and through and though for a while, she dabbled in the bright lights of Hollywood, she realised the LA life wasn’t for her. This song is about saying: “Goodbye to all the bottles, all the models/ Bye to the clouds in the skies that all hold no rain“.

Hollywood Forever Cemetery is a beautifully boujee resting place for some of Hollywood’s finest (Toto the dog, Joey Ramone…). Father John Misty loves to sing about hipster LA things and this cemetery is definitely one of them.

Patti’s song about this south LA city, is a sad story about a girl who washed up on the beach, a victim of suicide. Its ska beat doesn’t quite match the lyrical content but hey, Patti always defied expectations.

The crew that put Laurel Canyon on the map, this Crosby Stills and Nash song is about the house they shared together in the Hollywood Hills. Ah, the good old days.

Valley girls Haim were born and raised in LA and this song is a homage to their hometown.

Kendrick celebrates the women, weed and weather of LA in this Dr Dre. featuring track from his debut album ‘good kid, m.A.A.d city’.

As songs about LA go, this one is truly iconic. Does anything sum up the honeyed hedonism of the late 90s better than this Bran Van 3000 track about cruising around the city with your buddies?

The Mamas & The Papas – ‘California Dreamin’

A song about longing for the LA sunshine, when you’re elsewhere.

“They say, this is the city, the city of Angels, but all I see is dead wings”. Aussie, Brody Dalle has made LA her home for several decades, but on this she calls out the city’s fake facade; a city that projects glitz and glamour but will really swallow you whole if you’re not careful.

The lyrics to Regulate read like a movie script. Cruise with Nate Dogg, on this apex of 90s hip-hop, to “the eastside of the LBC/ on a mission tryna find mister Warren G“.

Listen to these songs about LA on the playlist below