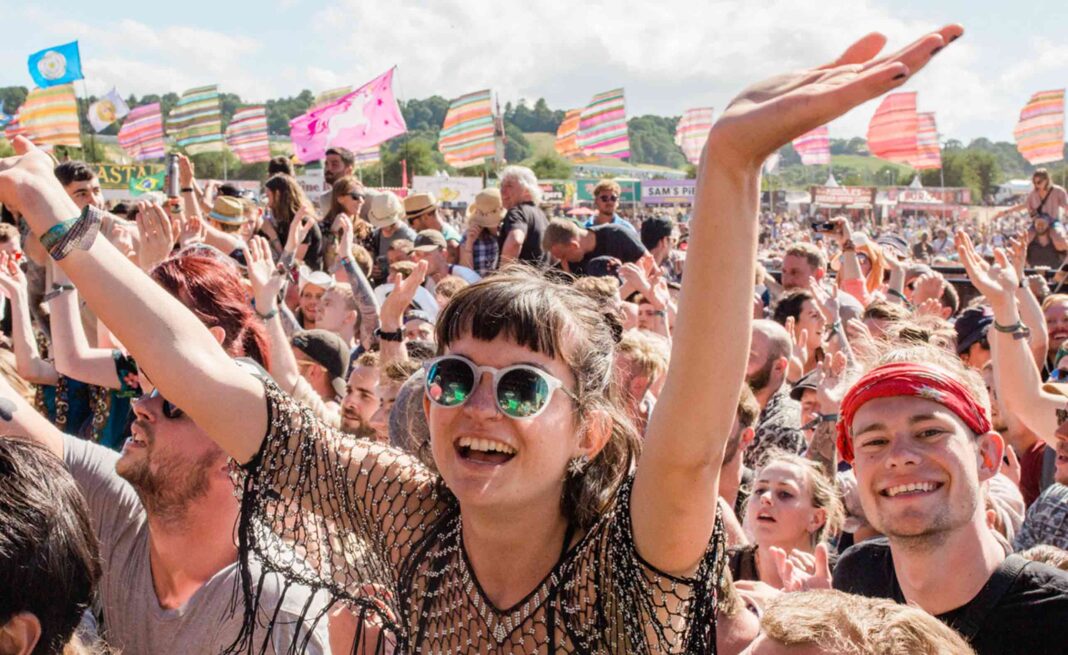 Before I went to Glastonbury, I insisted that I wasn’t going to become a Glastobore.

I didn’t want to be that person who constantly ranted to everyone I know about my transformative experience, and yet as I gorge myself on iPlayer coverage, sighing nostalgically into my leftover cereal bars, I am forced to confront it; there really is no better place on earth. From the outrageously wide range of food to the world-class talent in every corner, Glastonbury feels like the Olympics of music and the best holiday you’ve ever been on, all rolled into one.

However, despite all my fun, my visibility as a mixed-race woman at Glastonbury put me in even more of a minority that I’m already used to. As observed by Lenny Henry earlier this month, Glastonbury is not famed for audience diversity. Wherever I went, the default was whiteness, with Black attendees giving each other an encouraging, vaguely surprised look of unspoken recognition. Watching Little Simz on my own on Saturday night, I was approached by several white women who told me what a “brave queen” I was for coming to see “my girl” on my own, but who unapologetically rapped the N-word, and talked loudly throughout her performance when their interest waned, treating her as mere background for their night out. Given her clash with Billie Eilish, Simz’ crowd was impressively vast, but she had to stop in the middle of a poignant spoken-word piece to ask the crowd to “read the room [and] shut the fuck up”.

At Kendrick Lamar on the Sunday night, I found myself next to another large group of middle-aged punters who kept complaining about how “aggressive” his performance was, and how all of his raps sounded “like gibberish”. Where we stood, it would have been easy for them to leave and watch something else – instead, they proceeded to loudly boo him, throwing up mocking gun fingers. Even earlier in the day, large amounts of white fans could be seen wandering around the Pyramid stage, wearing large, oversized black afro wigs. It was ostensibly a tribute to Diana Ross’s teatime legends slot, but an uncomfortable choice given the costume’s lengthy connotations of menacing blackface.

Though I highlight these three instances, my discomfort at Glastonbury certainly wasn’t constant. I met so many warm, friendly people of all races, genders, ages, danced with fans who looked everything and nothing like me. I had great fun giving and receiving recommendations, telling complete strangers to see Lianne La Havas or Nova Twins and then being overjoyed when I randomly saw them later and heard about the great time they’d had.

With Emily Eavis’ stellar booking, there was no shortage whatsoever of non-white artists to see. I would class the instances I encountered as mostly pissed-up insensitivity rather than truly ill-intended racism, but I was still left with the feeling that certain punters saw Black artists as a mockable novelty, a by-product to tolerate rather than truly a piece of the event’s heart and soul. With Black artists performing to admittedly huge crowds, the issue appears not to be attendance, but entitlement; the gall to stand around and loudly critique or chat instead of simply moving on to something else. In a predominantly white space, those who had racially dubious views (like at Kendrick) felt emboldened to air them as if it was their home which we were personally invading.

Diversity and inclusion is a hugely tricky web to unravel, and one that obviously transcends Glastonbury. Having been to Reading & Leeds, Primavera, 2000 Trees, Festival No.6 and many more, I can say anecdotally that POC audience representation is lacking at all, with Lovebox being the only event that I felt reflected the kind of balance we see in everyday society.

This may have something to do with musical style – Lovebox predominantly books genres that are heavily steeped in Black cultural tradition – but as we all know, the line-up at Glasto doesn’t influence ticket sales at much as it does at other festivals. Glastonbury is a sell-out every year based on pure variety reputation, and for good reason. The idea that people of colour don’t like live music simply doesn’t hold, nor does the idea that Glastonbury doesn’t accommodate the widest array of genres of probably any festival in the world. So, what is the real issue?

Having made a new Black friend at the end of Little Simz, we tried to crack the issue. Half-jokingly, she explained that she felt Black people simply “didn’t do portaloos”, or that concerns about haircare maintenance and hygiene might culturally put people off the idea of slumming it in a field for five days. Festivals can certainly be prohibitively expensive (an issue that involves both race and class), and Glastonbury is particularly rural too, with a notable proportion of tickets being sold to white locals. If potential Black punters are worried about the conditions of the event, it’s pretty easy to just skip it and watch from home, saving your money for day events like Wireless or All Points East instead.

In lieu of a complete geographical change and toilet overhaul, the main issue seems to be simply one of time and reputation. After all, it was only in 2008 that Noel Gallagher famously declared that hip-hop didn’t belong at Glastonbury, steeped in racist ideas of what ‘real’ music could be. Jay Z proved him hugely wrong, as did Beyoncé in 2011, Stormzy in 2019, and Kendrick this year. But with Emily Eavis openly admitting in a recent documentary that having a Black-British rap headliner like Stormzy was “a little late maybe”, there is clearly still a large demographic of festival attendees wrapping their heads around the idea that white rock is not the singular mode of the event. These things take time to dismantle, and given that so many Glastonbury attendees love the event enough to return year-on-year, the overall demographic can take some time to shift. While one needs to step carefully with all-encompassing stereotypes around what Black people do and don’t like, it is distinctly possible that new audiences view Glastonbury through a certain lens, and don’t realise that it is something that they could feel welcomed and celebrated at.

So is there anything the festival can do to speed up this transition of true inclusivity, or is it just an unfortunate reflection of wider society? At Glastonbury’s end, any potential tweaks are fraught with complication; a system could be built to hold back a proportion of tickets for first-timers, but this would feel like punishment to those (including myself) who are absolutely desperate to go again. More Black artists could be featured in the prime TV slots, but this is also dependent on schedules and filming rights, the number of stages that simply aren’t filmed. Non-white people may also just not like the idea of Glastonbury, and that is fine. But by relying on that generalisation, we get in the way of pushing for more. If Glastonbury keep booking as well as they are now, one would hope that change will come of its own accord, but the conversation should still remain open.

People on Twitter have called Lenny Henry out for making a problem ‘over nothing’, and I suspect upon publishing this, they will do the same to me. But if this is my very own form of being a Glastobore, it’s a hill I’m willing to camp on; Black people belong at Worthy Farm. We need to be in those fields, cheering on Black and POC artists, knocking back our choice of beverage and soaking in world-class entertainment just like everybody else. In my view, every music fan deserves to feel a little bit of that magic in the flesh.