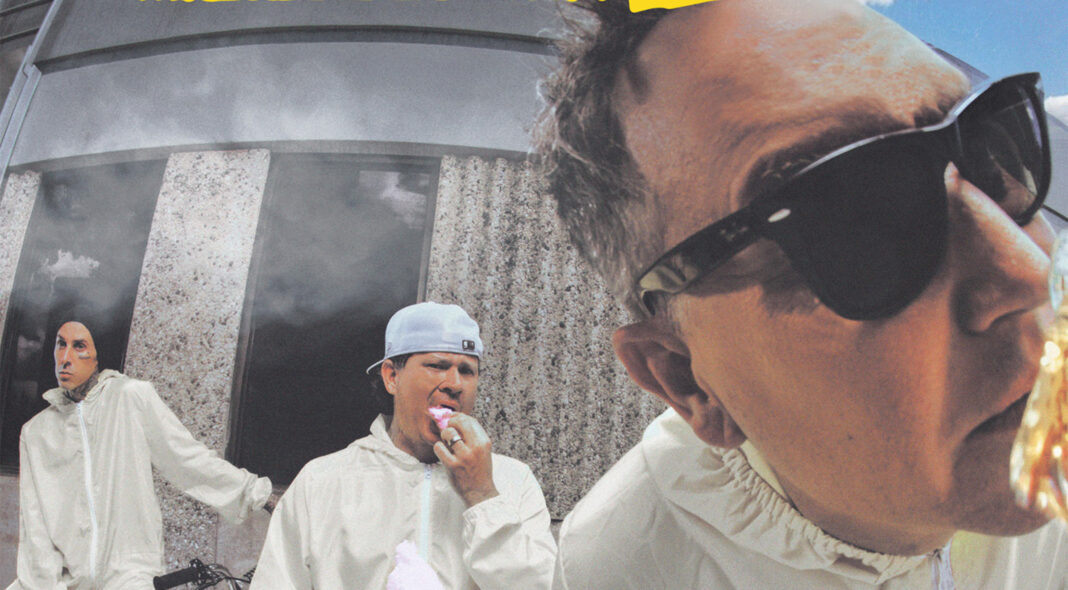 Emo nostalgia, it seems, can be like buses. You wait for one or two big comebacks (love you, Paramore and My Chemical Romance), and before you know it, another large be-fringed behemoth is upon you, holding out the vans and baggy pants and inviting you back into the noughties emo chaos.

I am of course talking about Blink 182, who surprised everyone this week by announcing the comeback of their original line-up, and a new single, ‘Edging’. With a 71-date world tour that includes a headline slot at When We Were Young festival 2023, as well as – potentially, if you look at gaps in their touring schedule – a possible appearance at Reading and Leeds, the pop-punk revival is showing no signs of slowing.

To claim Blink 182 to be influential would be something of an understatement. Bursting onto the California scene in the early nineties, they quickly found their stride as a colourful, fun-loving take on punk-rock, crossing over to the MTV mainstream and inspiring numerous bands who strove to capture their same sense of adolescent exploration. Whether it was guest-appearing in ‘American Pie’ or mimicking Backstreet Boys in the ‘All The Small Things’ video, they found ways to somehow shape and lampoon popular culture.

At a time when mainstream music was still quite serious, a big part of Blink 182’s appeal was basic boy humour — the toilet gags, the jokes about getting laid, the endless quips about screwing each other’s fathers/mothers. This is, after all, a band whose most popular albums are based on a laxative and masturbation gag respectively; they are decidedly unserious, while also happening to be some of the most dexterous musicians in the business, not least in Travis Barker’s now iconic drumming. One might argue that in being so openly puerile, they bought themselves quite a lot of creative freedom. Indeed, when they had their more emotional, serious heads on, they gave us some of the finest ever songs of the genre — ‘I Miss You’, ‘Stay Together For The Kids’, ‘Adam’s Song’ — and when they nailed their exuberant, youthful energy on songs like ‘First Date’ and ‘The Rock Show’, they shaped pop-punk club nights forever – and ever, and ever.

In recent years, however, a lot has changed, not least for the band members themselves. Bassist Mark Hoppus has successfully fought back against cancer, while drummer Travis Barker has truly redefined the ‘corporate emo’, marrying Kourtney Kardashian, overcoming plane-crash PTSD and drumming for pretty much everyone in the business. Returning member Tom Delonge, meanwhile, has been out hunting aliens, whilst Alkaline Trio’s Matt Skiba (quite successfully, it’s fair to add), held down the fort between 2015 and now. All three have undoubtedly earnt the right to have some fun

Still, some things never change. New single ‘Edging’, yet another ejaculation innuendo, is more of what everyone loves, right down to its comeback announcement (no pun intended). A smooth, accomplished blend between a catchily-upbeat chorus and emo lyrics about self-loathing and heartbreak, it’s can’t resist slipping in a classic Blink punchline-witticism; “I’m a punk rock kid/I came from hell with a curse/She tried to pray it away/So I fucked her in church”. It doesn’t feel wrong in 2022, but it certainly hasn’t moved much on from 2002.

Question is, do we even want them to change? Blink 182 worked so well in the 2000s because they embodied the era; their short, fast and loud approach defined an entire generation of frustrated college dropouts who binged on slapstick reality TV and middle-fingered a post 9/11 George Bush. There is something deeply endearing about the melodic styles they have coined, from Tom Delonge’s elongated whining vowels to Travis Barker’s extravagant drum fills. When it comes to recapturing those poignant teen feelings, they absolutely still feel relevant.  And yet there is no denying that the world has shifted, that cultural appetites and sociopolitical tolerances have changed. To Blink’s credit, their gross-out takes on sex, bowel movements and awkward dating were often self-deprecating rather than overtly misogynistic, especially compared to several other acts of that time. And yet, there is certainly material in their wider setlist that will have aged badly, that may not look good to a new generation of fans who are more willing to call out issues of poor inclusion, misogyny and casualised homophobic/ableist language.

Within this, there is a deeper question of who is allowed to rest on the laurels of the victory lap. Taking a look at WWWY’s 2023 festival poster, for example, the average age of frontmen (all men) in the top five bands on the poster is 49. It would be ageist, unfair and downright inaccurate to suggest that these bands don’t still have their own appeal, but there is something concerning about the way that nostalgia might serve to excuse some of their more problematic or icky traits (looking at you, Jared Leto) of maintaining the noughties status quo. While female-fronted acts like Paramore are frequently lambasted for continuing to play ‘anti-feminist’ songs like Misery Business, their male counterparts tend to enjoy long-lasting careers pedalling the same extended adolescence, never required to reflect or to grow at the rate. Blink 182 are of course only responsible for themselves, but when deciding future setlists, there’d be a fair bit of explaining to do to get around songs like ‘Transvestite’, ‘Fuck A Dog’, or even ‘Dumpweed’’s “I need a girl that I can train.”

In absence of being able to go back and rewrite their own history, Blink 182 can now only look forward. Having made it through their own personal traumas and all the way back to each other, they surely deserve this lap of honour. In an extremely serious and often terrifying world, a bit of toilet humour might well be the thing we all need to break the ice. I’m here calling for their change, while also acknowledging that the things that make them gross are very much the things that make them fun, albeit with some caveats that really do go too far.

Still, in 2022, I do believe that there is a way for Blink to be themselves and be responsible with their platform. As genuine scene leaders, it’s a little disappointing to see them putting together a touring roster of all-male bands rather than reflecting the ever-growing diversity of the scene, and to see them permitting Ticketmaster’s ‘demand pricing’ – the ticket equivalent of Uber’s surge pricing – instead of taking a stand against it like other bands of their size have. In their unique position as both emo-inspirators and genuine mainstream icons, they have the mobility and potential to keep things inclusive, whether that be financially, socially or just outright morally. Can these three horsemen of a-poop-acalaypse truly capture the attention of new Gen-Z fans with their gags, or will their ceiling always be capped at nostalgia? With only one new single out, it’s perhaps too early to judge. But when the Blink circus rolls back into town, I hope that elder emos are not the only ones laughing.