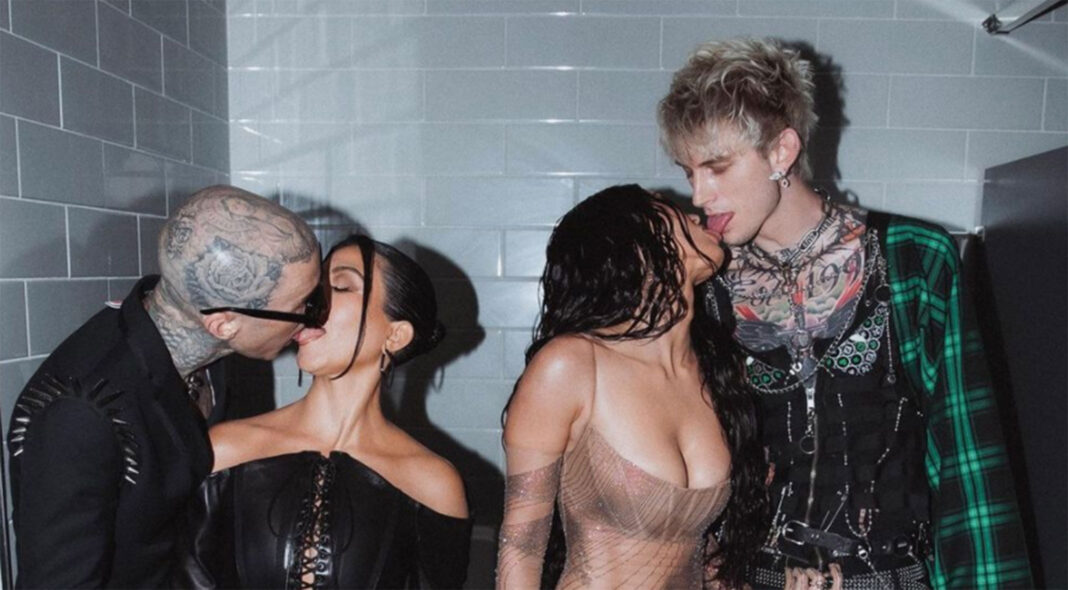 The Forty-Five is not in the business of celeb gossip, but we’d be hard-pressed not to notice that most of the talk around this years’ MTV VMAs wasn’t strictly musical. Though it boasted some impeccable performances from the likes of Doja Cat and Olivia Rodrigo, the wealth of its (allegedly lowest ever) ratings came from the red carpet — Machine Gun Kelly and Megan Fox in deep PDA mode, with Travis Barker and Kourtney Kardashian joining them at the afterparty for that now-legendary bathroom shot.

Having been denied a great many of our own smooching adventures during the pandemic, it’s maybe no wonder that they stole the show. In the age of stanning and shipping, both of these pairings are many gossipmongers dream — the classic meeting of a rocker boy and an impossibly glam girl, a supposed middle finger to normative attractiveness standards. But by getting bogged down in labelling such love matches as ‘bizarre’ or ‘punching’, we’re missing the obvious; we’ve seen this all before.

It all traces back to the 80s. The major plotline of a great many teen movies, we’ve been taught to root for the ‘outsider’ to get the girl, for the geeky best friend to win out over the hot jock. Nothing inherently wrong in that of course, but it becomes problematic when the stereotype is weaponised; when nice alt boys platform their “I’m different” ethos as snobbery, or when popular, conventionally attractive women are perceived as shallow pools who ‘date down’ as a means of either virtuous charity or rebellion. At its best, it’s a well-meaning way to re-appraise the overlooked underdog; at it’s worst, it sets a standard of applauding ‘hot’ girls and ‘alt’ boys for aesthetics alone, serving to intensify the kinds of abuses that can occur when actually-not-very-nice pop-punk men feel as if they are ‘entitled’ to something they have long been denied.

As alt-rock culture trended in the age of noughties ‘MTV-emo’, we were greeted with a great number of pairings that mimic the alt-glam dynamics of today; Travie McCoy and Katy Perry, Pete Wentz and Ashlee Simpson, Nicole Ritchie, Cameron Diaz and their respective Good Charlotte husbands. While not all of these romances lasted, they were all handled with a similar skeptical curiosity; the notion that they couldn’t possibly have anything in common, and that the young glam celebutante women were merely acting out with their rough ’n’ ready rock and rollers, experimenting with an alternative lifestyle without having to commit.

Though we are twenty years on, ‘Kravis’ and ‘Megun Kelly’ have faced much of the same debate. Though there are fans who have shown their support, there is an equal amount of dissent flying in all directions; fans claiming that Fox is what’s keeping Machine Gun Kelly relevant (and vice versa), fans claiming that she is distracting from his brand by being too ‘hot’, fans wondering what he is doing dating someone who appears to have ‘dumbed him down.’ The sexy-woman-as-artist-muse idea goes back just as far as the ‘unusual pairing’ one, and rarely gives much credit to the autonomy of the woman herself outside of what she can deliver by way of inspiration to the musical artist. In both Megan Fox’s and Kourtney Kardashian’s case, they have keenly demonstrated that both have very full lives and careers of their own, but their ‘mainstream’ attractiveness labels them as somehow unknowing, a voyeur seeking groupie caché while the boys get down to their ‘real’ musical work.

As with a lot of music fan debates, such criticisms are often rooted in the notion of authenticity. We want to believe that these people are only attracted to their ‘own kind’, and so we are fixated on dynamics where we believe that these pairings can only work because one or the other appears to have ‘changed’ to suit the other — Kourtney Kardashian donning a rockier wardrobe and aesthetic, Machine Gun Kelly seemingly owning the title of ‘daddy’ at high-profile events without any punk-rock irony. There is the instant assumption that this is fake or coercive in some way, rather than a fairly natural part of being in a relationship and picking up new interests, hobbies or expressions.

When Cannibal Corpse’s found member Chris Barnes labelled Kourtney Kardashian a ‘poser’ for wearing their band tee, many of us instantly assumed that it was Travis’s and that she was sporting it either for some kind of imaginary clout or with no regard for the band. As a result, she faced the same mercilessly-sexist ‘name three bands’ mockery that so regularly greets those who do not match up the ideal of what a ‘real’ rock fan should look like. Is it really so hard to believe that Travis and Kourtney might have listened to some music together, or that even, as a 42-year-old woman raised in the Glam-Metal homeland of California, she might have heard and enjoyed some rock on her own terms? Even if  – God forbid – she did just throw on her boyfriend’s tee without really thinking about it, where is the crime? We’re still working with the high school mentality that to be counter-cultural is to be inherently superior, and indeed plenty of the ‘mainstream’ snobbery towards both Megan and Kourtney demonstrates the degree to which tribalism and gatekeeping around certain musical scenes and styles still exist.

So how we do unravel this? It’d probably be healthier not to delve too deep into celebrity relationships, for a start, but it’s also important to remember that ultimately, this is a story of successful people gravitating to other successful people, on a shared level of understanding of the rigours of fame and dating as a famous person. After all, it’s not like Kourtney K is tonguing the penniless manager of your local dive venue, or MGK is making music videos and raunchy Insta posts with an unknown model. To talk about their romances as a ‘glitch in the simulation’ feels a little outdated — given that pop-punk culture is well on its way to becoming just as mainstream as anything else, this is not a revolutionary movement so much as it is a hopeful reminder not to assume the tastes and romantic autonomy of other people. Kourtney’n’Travis and Megan’n’MachineGun can maybe calm down on the extended tongue-licking stuff, but the rest we should be letting them get on with; why the hell not?

The Unsung – Dalida is France’s answer to Madonna

The songs you need to get you through Libra season