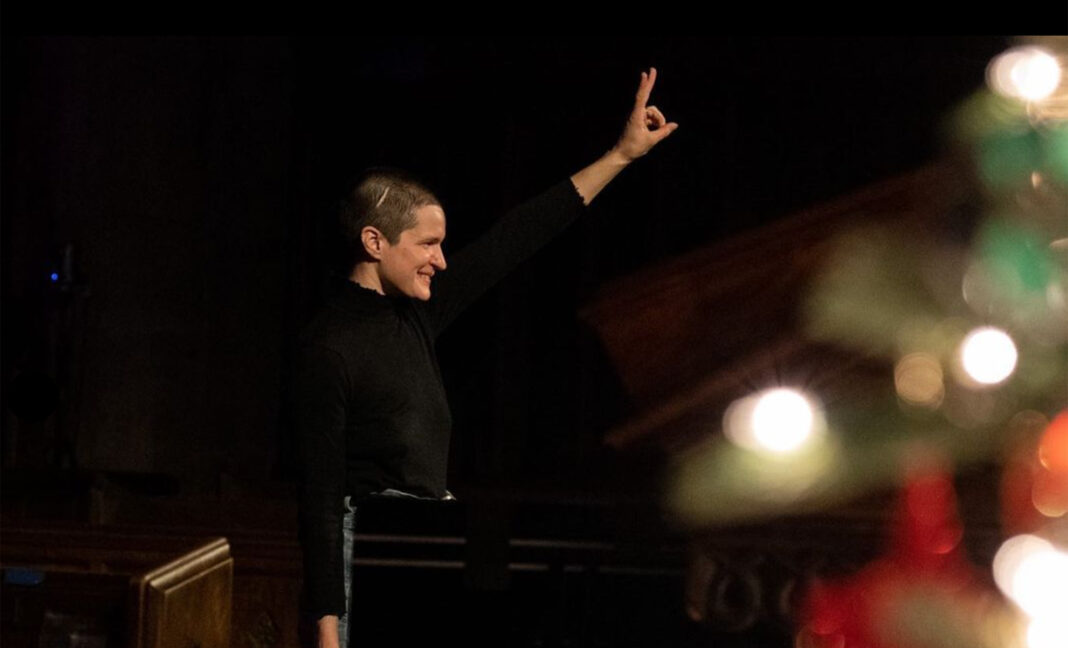 That the elegiac sounds of 1970s singer-songwriter Judee Sill are echoing around Koreatown’s imposing First Congregational Church of Los Angeles ahead of tonight’s show is no mistake. Both Sill and this evening’s headliner – Big Thief’s quietly majestic Adrianne Lenker – share the influence not just of their 1960s folksy forebearers, but of the giants of classical music. When opening act Ellen Kempner of Palehound talks about sharing songs with Adrianne she jokes that trying to learn Lenker’s tunes is the equivalent to “some Bach shit”.

A giant gothic church then is perhaps the perfect place to hear such modern baroque masterpieces as the ones that tumble easily from Adrianne’s acoustic guitar. The second of two shows in LA on her US solo tour, she steps onto the stage all in black and dives headfirst into Big Thief’s unreleased ‘Oldest’, a song that’s fittingly deep with an almost ancient energy. Her pure, crisp vocal then runs stream-like over the winding chords of ‘Happiness’ before the debut of ‘Horsepower’, an ineffably lovely country and western meets French chanson that’s made even more beautiful by flashes of heart-twisting minor chords. It’s followed by flamenco guitar fluttering through ‘Heavy Focus’ from 2020’s solo release ‘Songs’ while despite its talk of cellphones the unreleased ‘Hear It’ is so close to medieval balladry at times you wonder why Adrianne isn’t playing it on a lute.

Like Leonard Cohen before her, poetry is pivotal to Adrianne’s approach. Her melodies might be glorious, but the twinkling ‘Mr Tambourine Man’-adjacent bounce of ‘Zombie Girl’ wouldn’t be half as good if it wasn’t for the coruscating lyrics, a tale of a visitation during an episode of sleep paralysis from a woman as “vacant as a closed down fair”.

Chatter is kept to a minimum and instead we get focussed re-tunings of Adrianne’s guitar between almost every song. At one point she looks up from her reverie and asks the crowd how long she’s been playing for. “I have no concept of time,” she explains. “I accidentally played a two-hour set a couple of times on this tour.” We’re just over an hour in, but from the way the audience cheers at this confession, it’s clear that such an overspill wouldn’t be unwanted. Instead, she reels it in at a tight hour and a half, weaving Big Thief’s ‘UFOF’ into a set heavy with relatively unheard songs, including  ‘Simulation Swarm’ and ‘Dragon New Warm Mountain I Believe in You’ from next year’s upcoming Big Thief double album. Adrianne might have no idea how long she’s played, but she can be sure of this, she’s certainly left us wanting more.