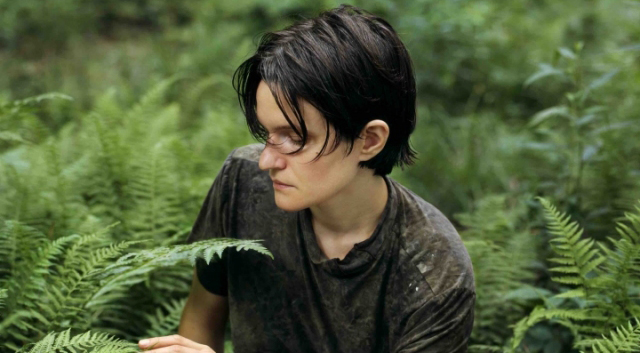 The worlds of song-writing and ASMR draw ever closer. Last week Phoebe Bridgers appeared on an ASMR Youtube channel, and this week Big Thief’s Adrianne Lenker releases a pair of solo albums recorded with a binaural mic, capturing every tiny alcove of her voice, alongside ASMR-type sounds – fire, a paint brush, pine needles, whispers – in a wood cabin that “felt like the inside of an acoustic guitar”.

April was a month of hollowed-out space and time for a lot of us this year. Lenker spent it in the aforementioned cabin in deepest Massachusetts, demanding “emptiness, tell me about your nature,” as she wrote and recorded songs that are sparse yet thick with harmony. Making music in a wood cabin sounds all a bit bearded hipster, but with Lenker it’s not a pose: her voice belongs to the natural surroundings.

Lenker’s solo work always remains as refined as the full-band output of Big Thief, yet it’s rawer, stripped of snares, her writing laid bare. A fast and prolific crop of songs on albums like 2018’s ‘abysskiss’ earned Lenker critical adoration and fans like Laura Marling and Carly Rae Jepsen, and it’s easy to see why. Emotional dial twisted high, her music is a direct channel of feeling rather than a product of heavy labour.

On ‘songs’, Lenker emerges from the tunnel of a break-up, blinking in the bright April light. Like throwing out a good winter coat at the start of summer, she’s tempted to discard the memories that feel burdensome. But she knows one day they’ll be good memories, so she captures them before they’re forgotten. She layers complex fingerpicked melodies on tape, and floods them with remembered fragments and plain honesty. Nature follows her everywhere: blueberries, cherry juice, red oak, moss, smoke, every season, every colour of every sky. She notes that “you are as far from me as memory”, a statement as deliciously ambiguous as anything Bob Dylan would write. By ‘dragon eyes’, near the album’s end, she removes the “you” of her heartbreak from the words, stripping down to herself: “I just want a place with you / I just want a place”.

Given her emotive pelt, Lenker’s lyrics are startlingly brief, and written down can seem small, even glib. The shrug of ‘not a lot, just forever’ would’ve made a good Tumblr blog name ten years ago. The line “wanna listen to the sound of you blinking” almost reads like a tweet sent in beer-fuelled sentiment, but it’s a completely different creature when Lenker sings it. You’re compelled to rewind, and hear the barely-camouflaged poetry. Comparisons to Dylan or Joni Mitchell feel corny yet irresistible: songs like ‘zombie girl’ get so close to the undefinable quality that makes those artists great. But really, there is nobody quite like Lenker.

Acoustic guitar is the only ‘real’ instrument on both albums. When you’re a lyricist as skilled as Lenker, though, your guitar-work is oft overlooked. ‘instrumentals’ partly fixes that. Of its two tracks, ‘music for indigo’ roams over twenty minutes, ‘mostly chimes’ sixteen, requiring a focus often shelved in this snippety TikTok era. The binaural mic captures guitar, chimes, birds, footsteps, and sighs, the intimacies of Lenker’s environment and musicianship. It’s hard to completely lose yourself these days – there aren’t enough wood cabins to go around, for a start – but ‘instrumentals’ gets you pretty close. Its presence ensures that the tracks on ‘songs’ aren’t caught in a context-less zoo, but breathe untethered in their natural setting.

Lenker’s music constantly invites adjectives like ‘instinctive’, ‘intimate’, and ‘vulnerable’, and all of these are true, but bury the force that sets her apart. Like ASMR videos, these two new albums allow you to be still. But any contemplation or resolution really occurs via Adrianne Lenker’s vigour and, yes, vulnerability – which is probably why listening to ‘songs’ and ‘instrumentals’ feels like pressing down on a bruise, then letting go.