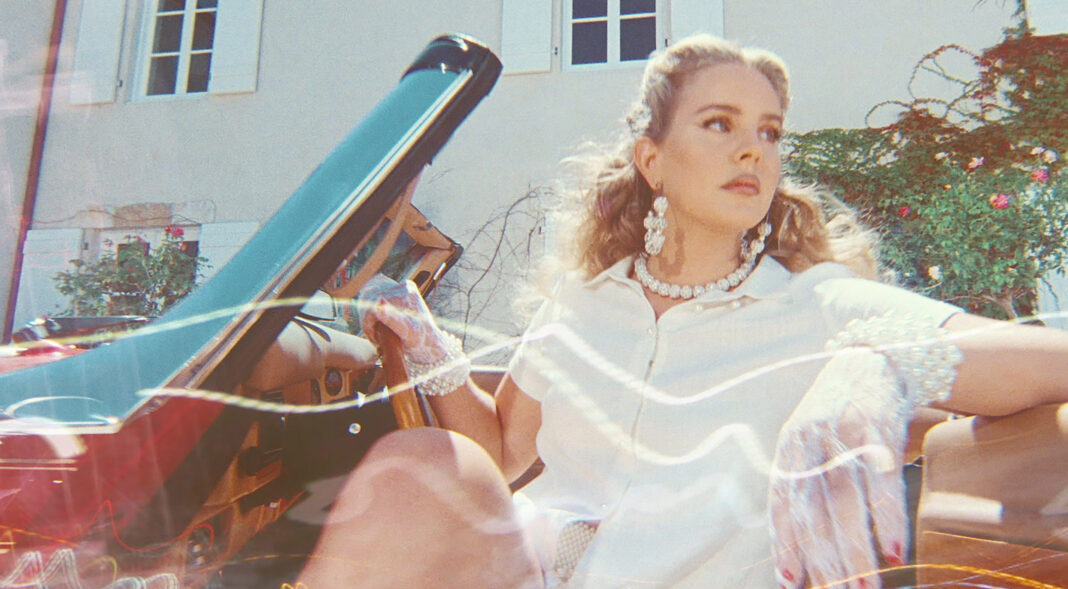 You can call it the ‘folklore’/’evermore’ effect because one album a year might not be enough for musicians anymore. No sooner had Lana Del Rey released ‘Chemtrails Over The Country Club’ on March 19, than she announced that she was already planning her next album rollout. So before you head off to the Men in Music Business Conference, sit back and tuck into everything we know about LDR’s eighth album so far.

Just one day after the release of ‘Chemtrails’, Lana took to Instagram to officially reveal her second album of 2021, which will be entitled ‘Rock Candy Sweet’.

She also gave a brief insight into the themes of this upcoming record via Instagram Stories, where she screenshotted a Harper’s Bazaar article entitled ‘Lana Del Rey Can’t Qualify Her Way Out Of Being Held Accountable’.

Her all-caps caption read: “Just want to thank you again for the kind articles like this one and for reminding me that my career was built on cultural appropriation and glamorising domestic abuse. I will continue to challenge those thoughts on my next record on June 1 titled ‘Rock Candy Sweet’.”

Del Rey proceeded to comment on direct quotes from the Harper’s Bazaar article and claimed she wanted “revenge” for being “significantly criticised” in the run-up to the release of ‘Chemtrails Over The Country Club’.

After releasing the ‘Chemtrails Over The Country Club’ album cover back in January, Del Rey immediately jumped to its defence in a now-deleted Instagram comment: “In 11 years working I have always been extremely inclusive without even trying to. My best friends are rappers, my boyfriends have been rappers. My dearest friends have been from all over the place, so before you make comments again about a WOC/POC issue, I’m not the one storming the capital, I’m literally changing the world by putting my life and thoughts and love out there on the table 24 seven. Respect it.”

When will ‘Rock Candy Sweet’ be released?

As per her Instagram announcement, ‘Rock Candy Sweet’ is currently set for a release date of June 1 2021.

Fans, however, remain a little sceptical after the initial release date of ‘Chemtrails Over The Country Club’ was pushed back by several months – a delay that Lana attributed to a “16-week delay on the vinyl process”.

It’s currently unclear whether Lana will follow in Taylor Swift‘s footsteps and make ‘Rock Candy Sweet’ a sister album to ‘Chemtrails’, but fans are already speculating on the sonic direction the album might take.

Who will feature on the new record?

The supporting cast of ‘Rock Candy Sweet’ is under wraps so far but it’s more than likely that at least one big-name feature will appear. Lana has an impressive list of collaborations to her name already; notably The Weeknd, A$AP Rocky, and Stevie Nicks, who all appeared on 2017’s ‘Lust for Life’. ‘Chemtrails Over The Country Club’, meanwhile, included a duet with country singer-songwriter Nikki Lane and culminated with a Joni Mitchell cover, ‘For Free’, featuring Weyes Blood and Zella Day.

On the production side, Jack Antonoff is likely to take on the duties once more. Antonoff has produced Lana’s two most recent albums.

Have we heard any songs from ‘Rock Candy Sweet’?

There’s no official tracklist yet but that hasn’t stopped the wild internet speculation. On March 22, Lana posted a photo of herself on a tree swing with the caption “Swing it high Angelina on your sycamore tree / What you don’t tell no one you can tell me”. This caption was, in fact, a lyrical nod to her as-yet-unreleased song, ‘Cherry Blossom’, which she first teased in 2016 via an acapella clip on Instagram. The track was leaked in full in 2019 but is Lana’s post a sign that the song will finally have an official home on ‘Rock Candy Sweet’?