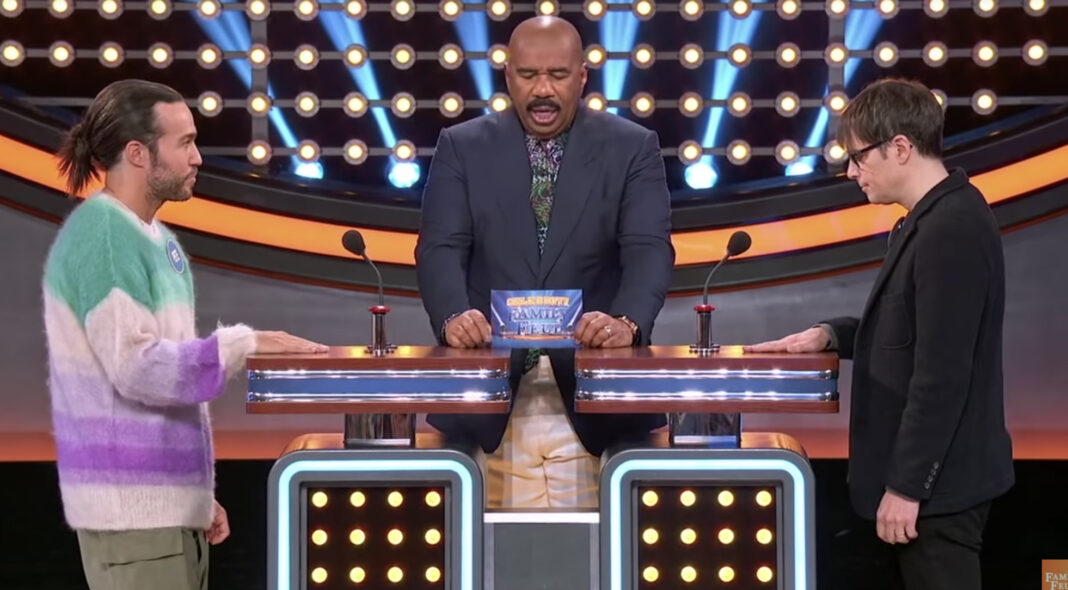 In a special edition of the US’ favourite gameshow, Family Feud, pop-rock favourites, Weezer and Fall Out Boy take to the podium to battle it out for some charity money.

The show, hosted by Steve Harvey – which is essentially the American equivalent of Family Fortunes – sees contestants predict what the general public will have answered when surveyed on a range of questions such as: “In hell, all strippers look like…”

First to take up the buzzer challenge are frontmen Pete Wentz and Rivers Cuomo.

“I think that might have been the first time we’ve ever hugged” says Wentz, as he greets Cuomo at the stand.

Cuomo goes on to win the opportunity to ‘play’ the first round, leaving Wentz, the rest of Fall Out Boy (and Seth Green of Family Guy fame who is also playing on Fall Out Boy’s team) waiting for a chance to steal.

The full episode streamed on Sunday 20 September on ABC and Hulu in the US.

Further clips from the show can be watched below, including Pete Wentz playing the Fast Money round after Fall Out Boy (and Seth Green’s) defeat of Weezer.

Question: “Name something your parents have that’s better than yours.”

Question: “There’s a million to one chance that what will happen to you?”

Watch Pete Wentz and Patrick Stump from Fall Out Boy play Fast Money, fairly badly, for their chosen charity below.

Kanye West and Kim Kardashian have previously taken on Family Feud, citing it as one of their favourite shows.

Fall Out Boy and Weezer should have been on the road with Green Day this year as part of their Hella Mega tour. The trio of bands played an opening show at Los Angeles venue Whisky-A-Go-Go to launch the tour a year ago, but unfortunately COVID-19 has meant the shows are on pause until 2021.

READ MORE: The best emo songs of all time