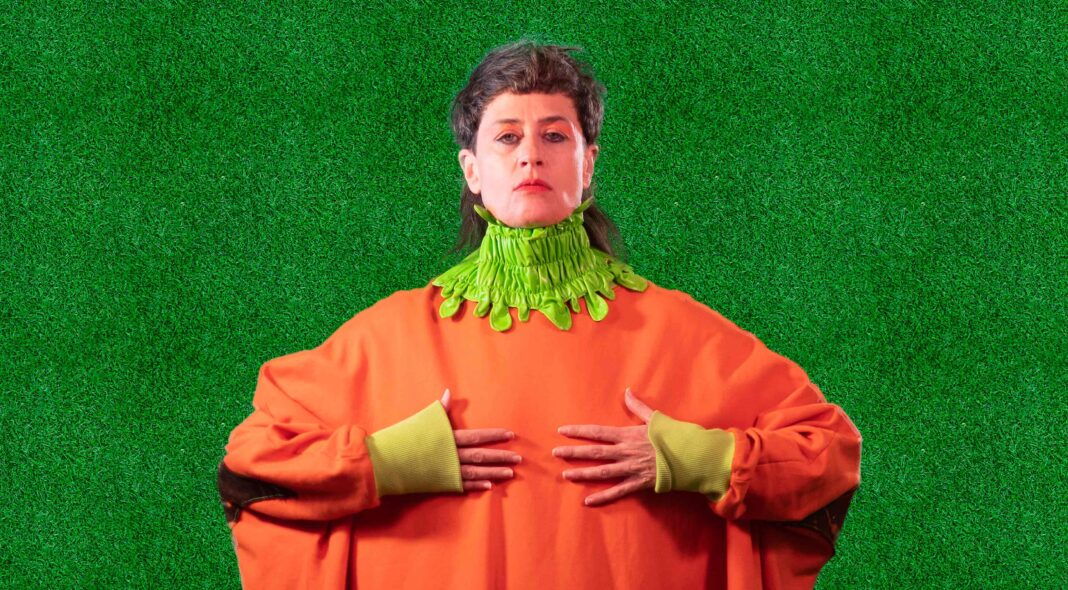 For the past twenty years, Peaches’ pioneering work has hinged upon a very bodily, physical form of expression, and has delighted in subversion. A brief highlights reel: for 2003’s ‘Fatherfucker’ the Canadian artist donned a fake beard on the album cover, and later wore it on-stage when she performed on an episode of noughties lesbian drama The L Word. In 2010, she queered up Andrew Lloyd Webber’s rock opera, Jesus Christ Superstar. Six years ago, ‘Rub’ featured a music video centred around squirting; an act which is ludicrously banned in British pornography. And ‘Fuck the Pain Away’ – Peaches’ breakthrough single – took the pain of a cancer scare and a brutal break-up, and channelled it into an electroclash fuck-fest. Last year, her debut album ‘Teaches of Peaches’ celebrated its twentieth birthday.

Before the pandemic hit last Spring, Peaches was exhausted, having wrapped up Whose Jizz is This? – her first solo art exhibition at Hamburg’s Kunstverein. The show starred a cast of double masturbators; strange, disembodied mouths and vaginas mounted on the end of fleshy latex tubes. Discontent with being mere holes for human pleasure, the gang of sex toys organise themselves into a sexually liberated community, naming themselves Fleshies. Together, they stage performances and lounge decadently in fountains like Roman diners while jizzing on each other. It’s a mildly disturbing, bizarrely heartwarming scene. Straight afterwards, Peaches launched straight into another ambitious project: There’s Only One Peach with a Hole in the Middle. The stage show featured a cast of 40 musicians, dancers and crew members, and celebrated the twentieth anniversary of her debut album in flamboyant, musical theatre style. Initially Peaches was grateful for the rest. Soon, her home city of Berlin became unrecognisable; the clubs bolted shut. “When everything stops you really have to look at yourself,” she says.

Stepping back from art has forced the Canadian-born musician to find “more of the person within me” and to search for new ways of connecting. In November last year, Peaches’ sister passed away; fortunately, she and her mother were both able to fly to New York so they could spend some quality time together and say goodbye. She was very lucky to get the chance, Peaches acknowledges. “There are a lot of situations, especially with older people who are struggling, [where] it’s like – that’s the end of your life, and you’re sick and even the people you love aren’t allowed to come and visit you,” Peaches says. “They’re not allowed to be close to you. That just seems cruel.”

Peaches’ family are Jewish by tradition, and would normally hold a week-long Shiva to give family and friends a place to come together, mourn, and share memories. Due to restrictions, the memorial took place over Zoom. “It was sort of… amazing,” Peaches says. “Everybody listened to each other. If you would imagine in real-time, you wouldn’t get the Shiva in one big circle and say, ‘ok now it’s your turn to talk’. Nobody would ever do that. In this case people really wanted to share. It was a way of letting everybody be heard.”

In her music, too, Peaches has been thinking about how best to connect in a year where close social contact is inherently unsafe. As performers go, Peaches is admittedly not very ‘COVID-secure’, and her shows tend to be sweaty, writhing, hedonistic affairs. Since ‘The Teaches of Peaches’ her music has centred sex positivity, women and trans and/or non-binary people’s pleasure, and what Peaches calls “the politics of jizz”. This year, its entire context has shifted beyond belief. It has also been a strange and difficult twelve months for anybody who does not live with a partner – for single people, and anyone in relationships that fall outside of traditional, cohabiting couples, sex has been illegal. It has led to Peaches asking new questions. “How can we navigate this…” she wonders. “I mean, what is it ‘I’ve got a PCR test so c’mon over’” she laughs. “You know? What is the protocol, what is the way of connecting?”

On new single ‘Pussy Mask’ Peaches pushes these ideas to the extreme, imagining a world where bored and lonely vaginas separate from their owners and break lockdown en masse – while wearing surgical face-masks. “What if your pussy just got out of control and started to publicly go around? Is that a public health crisis?” she wonders. “My pussy wear a mask, take cover from the spray,” Peaches warns gleefully on the track, “my pussy wear a mask, drippinʼ droplets all day”. It’s accompanied by an animated cartoon video by collaborator Leah Shore. Squirting with every step, a masked-up pussy leaps through an absurdist world. Democrat politician Alexandria Ocasio-Cortez, US chief medical advisor Dr Fauci and the late Supreme justice Ruth Bader Ginsburg all make unlikely crowd surfing cameos.

“Sometimes when you bring humour into it people can laugh for a second, and let it in a little more,” Peaches reasons, outlining her approach. “I find those situations that are serious quite absurd, in a way. When I generate other absurdities – and people are like, oh she’s just being absurd – it’s like, actually, look at the real situation! You know how people say ‘you couldn’t make this shit up?’ It couldn’t be more absurd than the reality of it.”

Upon release, ‘Pussy Mask’ immediately won comparisons to Megan Thee Stallion and Cardi B’s own ode to “wet ass pussy” – a link Peaches finds predictable. “The only thing that ‘WAP’ and ‘Pussy Mask’ share is the word pussy,” Peaches says. “There’s only one female-identified pussy song a year,” she points out, wryly. “If it was in this male-identifed cis realm,” she adds, there would be more room. “It would just be a thing,” she says, “like, oh that’s what people are talking about right now.”

“Are you kidding me?!” Peaches exclaims. “You know, when I played my first NME show [at London’s Astoria in 2001] I opened for The Strokes – and then it was […And You Will Know Us by the] Trail of Dead and Rocket from the Crypt. I was 33, and the headlines were like ‘Grandma, You’re Scaring the Kids’. It’s amazing. I noticed [ageism] at the beginning and then it was just like, forget it,” she says. “I’ve never drank the juice of all of that, anyway. I found out I was ugly from becoming Peaches too,” she laughs, ”’her ugliness is what’s so great about…’” she adds, mimicking an anonymous onlooker. “I was like, oh, I’m ugly? Ok!”.

‘Pussy Mask’ Peaches adds, returning to her new single, was originally destined for a forthcoming new record. Then, Peaches realised the message of ‘Pussy Mask’ was too relevant to keep under wraps. “So I just focused on that and then I’ll continue with the album,” she says. “But for me, there’s no rush, I just want to make a good album.” What kind of direction is the new work heading in? “It’s actually going in a lot of directions,” she replies, cryptically. “I’m really going to do whatever the fuck I want, really. I’m not really worried, if I’m happy with it, I’ll be happy with it.”

When it comes to the teaches of Peaches, doing whatever the fuck she wants has become a mantra. The newer artists she most admires – the new wave of raw and direct female rappers, Charli XCX and the late producer and artist SOPHIE – all share her hunger for boundary-pushing. And looking back, she wouldn’t change a thing. “I was so obsessed with infiltrating everywhere,” she says, “I was like, this is the moment, I have to do it. I don’t think I would change that,” she concludes. “The beginning was a light switch moment, and that light switch has just been on ever since.”