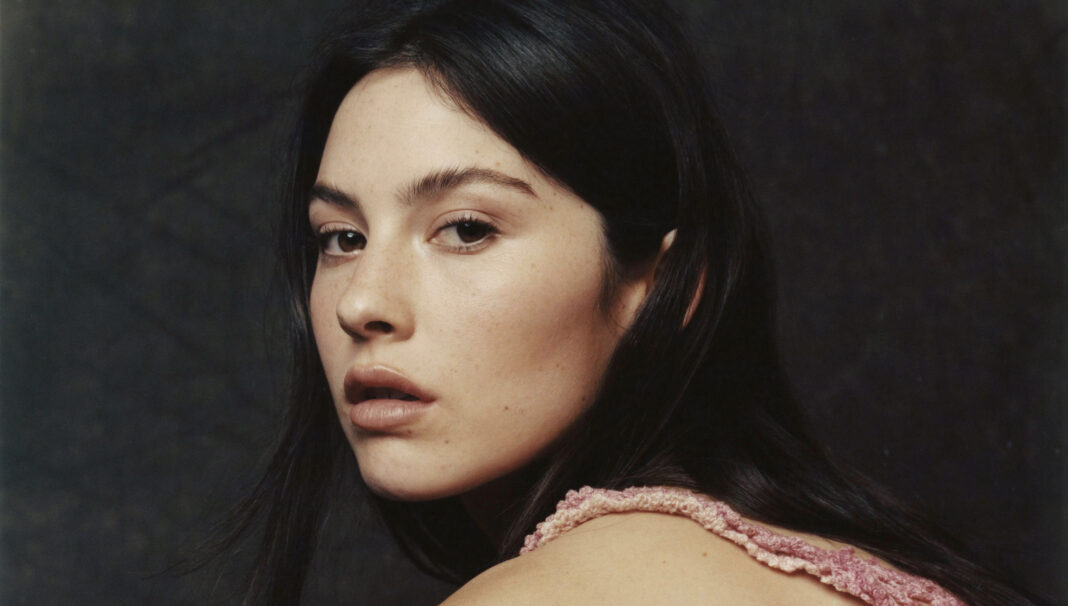 Gracie Abrams twists her elbow around to show me her latest tattoo. It comes into view, simple and handwritten, running quietly across her outstretched arm – the word “river”. It’s a tribute to Gracie’s favourite song, by her favourite artist Joni Mitchell.

“It’s me and my mom’s favourite,” she smiles. “The song means so much to me. I’m a very physically anxious person, and running water has always made it better. Any time I stand in the river, my entire nervous system feels calm again.”

Joni Mitchell, whom Gracie refers to with almost deified status as just “Joni”, is her most foundational musical influence. “Her music is timeless. I am so attracted to songwriters who, when I first listen to them, I believe I will still love in 15 years’ time. I felt it as a tiny kid listening to Joni with my mom while making breakfast. I love Joni’s music even more now than I did then.”

Setting up her place at the altar of Joni worship is a telling starting point – Gracie Abrams is a student of the songwriting tradition, first and foremost. “The way words are crafted in song is so compelling and beautiful, and a really incredible reminder of the beauty of language. That is so much more arresting and gratifying to me than how bad I can feel on my worst day. One of my favourite pastimes is just reading lyrics without music. It’s pure poetry.”

She grew up in California, a daughter to director J. J. Abrams (Lost, Star Trek, Star Wars) and film/TV producer Katie McGrath. Amidst the elaborate musical world she has created, discussion of her pedigree proves unnecessary. Woven together from the rich fabric of heartbreak and overwhelming young emotion, her artistry is smart, intimate, and sharply diagnostic of what it is to be young and destroyed by your own feelings. “What I hope to do with my music is tell stories that make people feel emotionally included,” she says. “I hope it helps them feel less alone in situations that feel so emotional, so personally difficult, so isolating.”

This approach has seen her cultivate a close relationship of solidarity and understanding with her fans. In an Instagram Q&A, she asked her audience: “How are you feeling right now?” Answers ranged from frustrated quips about the pandemic to agony aunt requests like “I kissed my brother’s friend! What do I do?” (Gracie’s response? “Write about it!”). Some responses were incredibly vulnerable. “Afraid I won’t heal,” one person said.

Gracie’s music unlocks this vulnerability in people. Her songs, though quiet and gentle, are set ablaze by the lucidity of her lyrics. “I still haven’t heard from your family / But you said your mom always loved me,” she sings of post-break-up loss on ‘21’. Her writing gives definition to the painful emotional truths at the centre of our relationships, like the way we lose ourselves to the other person, even when we know they’re no good for us. “Talk to me more,” she begs her partner on ‘Mean It’; on ‘long sleeves’, she sings quietly, “you’re good to everyone / all of them but me.”

Taking a break from her freshman year of college in New York (studying International Relations at Barnard), Gracie came home earlier than planned. “I felt a shift after moving home to LA from New York. Maybe it was being out of school earlier than most of my friends, but I felt out of step. I channelled that into writing about how I felt in each moment to feel more grounded.” This culminated in her debut EP, ‘minor’, an introspective and vulnerable collection of seven songs about heartbreak and young adulthood, which she released in June 2020. “I made that project in the heat of the moment,” she reflects. “In that way, it feels like a super accurate description of where my head was at the time – busy, full, and word vomiting my feelings constantly.”

Releasing her debut EP into the thick of the pandemic netted Gracie a unique duality in her musical success – an explosively popular and resonant project, but whose feverish reception played out entirely virtually, almost on “mute”. She has played to fans on “bedroom tour” for the last year, and made her Jimmy Fallon debut with a live-streamed performance from the foot of her childhood bed. The view from the front rows of her Sydney and Berlin “shows” looked the same, from the crumpled bedsheets in the corner to the glow of the desk lamp beside her.

This autumn, Gracie performed her album for a live audience for the first time. Watching her onstage at the London Omeara on her last night of tour, the palpability of the experience is contagious. She physically takes in the room, her eyes peering from corner to corner full of wonder as fans address her with familiarity and endearment in their hollers and cries. She peppers her performance with little waves and outstretched arms, directed at specific members of the audience each time as if she recognises each person from somewhere in particular. “This is literally crazy,” she beams in disbelief.

The foundation of her musical craft, writing is also what gives Gracie the methodology and discipline to work on herself and keep growing. A lifelong and rigorous journaller, Gracie shares that almost all of her songs began as diary entries. She practices journaling almost like a science, using it as a grounding point and a way of working through things. Through this process, she has felt ready to shift her songwriting focus away from the minutiae of the Gracie Abrams relationship universe onto other themes. “As I grow up, I’m interested in being less self-centred, if you know what I mean. It’s so easy when we’re little to truly believe that we are the centre of our own universe, which is true, but of course only to a degree. I don’t want to be consumed by the relationships in my life and every detail of them. There is so much more that I’m inspired by that isn’t just the romantic relationship I’m in, or my immediate friendships. I’m looking to hold up less of a mirror to myself.”

In music today, though, making everything about you is almost the name of the game. Gracie knows this, but wants to try fighting it anyway. “Joni Mitchell did not have Instagram. She did not have people telling her to post photos of her face all the time. I know we work in totally different times with different audiences, but I care much more about writing than the ‘artist’ stuff that’s all about me. I’ve always just loved how writing makes me feel.” She is begrudging about the trappings of streaming, algorithms fuelled by pictures of yourself, and the apparent necessity of all these ingredients for a viable music career. “In this job where my name and face are on everything I do, not only do I not recognise that person all the time, but I refuse to allow that to be everything about me.”

Her forthcoming project, ‘This Is What It Feels Like’, is an opportunity to channel this new perspective. It features her latest single, ‘Rockland’, which she wrote with The National’s Aaron Dessner, one of her heroes, at Long Pond Studios in upstate New York. Gracie is intentional and excited about this next chapter of her music. “I allowed myself a different kind of patience in making this project. I’m happy it isn’t ‘minor’ again, as this feels like more of an introduction to who I am as an individual instead of in relation to another person.”

The process of writing ‘Rockland’ alone was already different from how she made ‘minor’. “When you’re out at Long Pond, it feels like the place writes the song for you.” Creating the song with Dessner was effortless. “Aaron was in the booth layering a guitar riff. He was being a perfectionist, fine-tuning it a thousand times. I was outside the booth listening to him, and he couldn’t hear me. I went into a trance listening to him and ended up writing the whole song that way. When he came out of the booth, I had the full song ready. That was the whole process. It was bizarre, an almost 50-50 collaboration. We made it on the second day we met.”

Put on the spot to tell me her favourite lyric, Gracie goes back to where it has always started – Joni Mitchell. “Probably ‘I would drink a case of you’. I just think that’s the most romantic line in history. It’s such a crazy lyric. How do you think of that? Are you kidding me?” Since she can first remember hearing it, she has loved it forever.

“You know that line in Lorde’s ‘Stoned at the Nail Salon’? ‘All the music you loved at sixteen you’ll grow out of’?” Gracie muses, thinking aloud about whether the songs we loved when we were young always have an expiry date. “Obviously, everything Lorde says is true, but I really haven’t grown out of any of the music I loved at sixteen (Lorde’s music at the top of the top of the list, by the way).” The way Gracie’s music connects, deeply and intimately, with her audience, is proof enough of the enduring currency of truthful lyrics. She writes from the heart and follows that straight to the truth – her words will always make sense, no matter how much time has passed, to the people who love them.

‘This Is What It Feels Like’ is out now