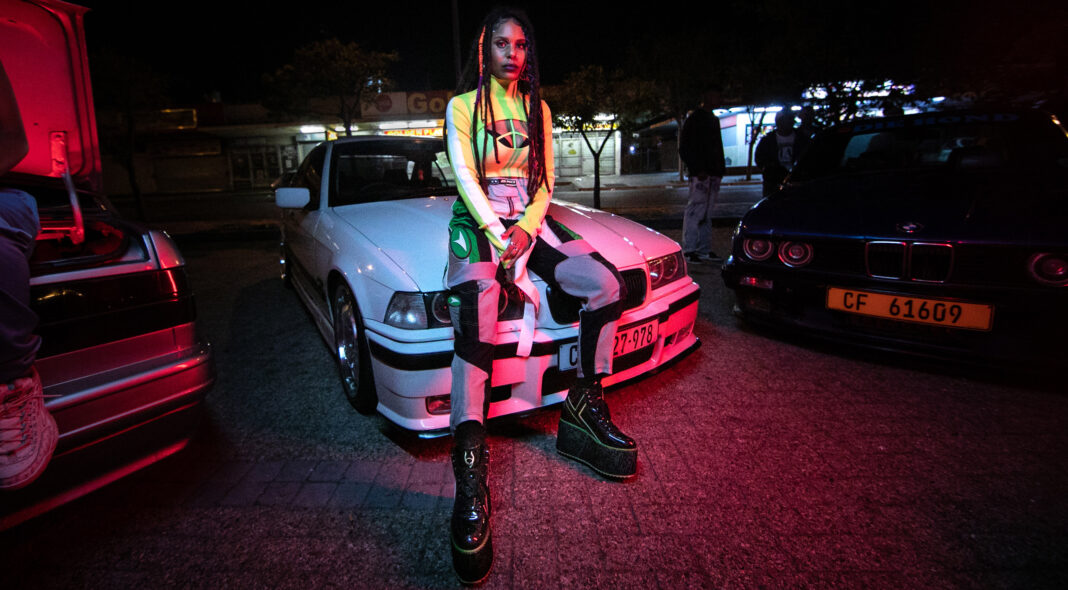 Rapper and producer Dope Saint Jude – real name Catherine Saint Jude – blends Cape Town hip-hop and political lyrics, carving out her own place in a male-dominated genre. Her music is fearless, confident and unapologetically queer, with recent tracks such as ‘Go High Go Low’ celebrating her identity, and ‘Grrrl Like’ even finding its way to the trailer for Netflix’s ‘Blood & Water’.

Her lyrics are a smart and relatable comment on what it means to be a queer Black woman. We caught up with Dope Saint Jude via Zoom on identity, legacies, and breaking down barriers.

You moved to London quite recently – how have you found adapting to the way you make music in the context of everything, and living in a different place to where you grew up?

Back home, I had a very strong sense of community and a lot of my music centred on my lived experiences there. Now, my lived experience has shifted from being someone who is born and bred in Cape Town and being someone who’s embedded in the queer scene over there, to coming to a new city. It has affected the tone and narrative of my music because I’m no longer someone who is staying in one place. Last year I travelled a lot, I was touring a lot, so I feel very much like an international kid – a child of the internet – because when I came here I realised how easy it was to relate to the culture, because of the internet and the media in general. It’s kind of a strange experience.

In terms of the lockdown, I find it to be quite peaceful creatively. I’ve taken this as time for reflection, instead of trying to quickly adjust to a new way of things. Besides the pandemic, there’s so much going on around the world and it’s really pointing out how frail our existence is and how interconnected we are. There’s a strong sense of people reflecting on what it means to be part of the human race. It feels like that’s something happening across the world right now.

Your drag king group was the first of its kind in Cape Town. How has being queer and your Saint Dude persona informed your writing?

First of all, drag was such a phenomenal experience for me. It’s extremely liberating to be in drag. When I first started going out I was going to queer clubs and drag clubs and there was this feeling of complete freedom. Coming from this small place in South Africa that was pretty conservative, to experiencing the drag scene… it was just this all encompassing overwhelming feeling of freedom. That was where I started my performance. It informed a bit of a DIY, free feeling in my music. I didn’t feel like I needed to conform to anything. When I started the group, it was a time for experimenting and creating rules around what I wanted my music to be like.

What do you think are the main differences between the hip-hop scenes in South Africa and London?

The hip-hop scene in South Africa is starting to develop now and take on a kind of African identity. For the most part it’s quite Americanised and a lot of people are doing a copy and paste of what they see in the US. What I see in the UK, it just feels a lot more organic. You’ve got the grime scene and amalgamations of garage music and other things that have all come together that feel distinctly British, as opposed to a lot of South Africans who rap with American accents but don’t really speak with American accents. But, it’s definitely changing now.

I think African people are starting to embrace their African identity and it’s suddenly becoming OK and marketable to be an African artist and I’m seeing a lot of artists embrace that in the hip-hop scene, rapping in their home languages. The infrastructure is also really different – South Africa’s whole music scene is in its infancy and resources for artists are not the same as they are on this side of the world. You’ve got lots of clubs and open mic nights and things like that, and artists can build a following a lot easier here than they can back home. Especially if you’re a smaller artist with no label backing or a niche artist that’s independent, it’s difficult to build a career in South Africa. I see a lot of independent artists making it big here in the hip-hop scene, which I think is pretty cool.

And it’s a big issue because we know that most music came from Black people, yet there are obviously issues with infrastructure and opportunities.

Especially as a queer artist, I know that if being queer wasn’t such a big part of my identity or I was willing to conceal it, I probably would have made it a lot bigger back home. There’s a lot of politics at play and a lot of racial politics on top of that, especially in South Africa that feeds into the music scene and just seeps into everything. You see it in the music scene with people being loyal to others who belong to certain groups. I understand that it comes from colonialism and apartheid. But, at the same time, it’s difficult to grapple with. I want to be at home, but I just don’t believe I can do what I’m doing back home.

I love how much you celebrate women in the video for ‘Grrrl Like’. How do you overcome the barriers put in front of you as a queer woman in this genre?

I’m taking a lot of inspiration from other Black women and seeing what they’ve done, and then relating that back to my own story and saying “if it’s possible for them, it’s possible for me”. I’m doing a lot of reading and trying to break cages in my mind. I always believed from a young age that I was constantly breaking cages or limits in my mind that I set for myself. When I was a kid growing up in a poor area I didn’t think, for example, that it was possible to go to the University I went to. I had to break that cage and I believed it was possible and I took that step. It’s about pushing the limits of my potential and convincing myself that things are possible. It’s a constant process and negotiation with myself and I’m sure that’s the same for a lot of people who come from disenfranchised groups, because you socialise into believing that things aren’t possible for you so you have to constantly be hyping yourself up and convincing yourself it’s possible.

The video for ‘Go High, Go Low’ is set in the Cape Flats, where you’re from. Why is it important to you to highlight your experiences growing up?

I draw so much inspiration from other people who have come from difficult backgrounds. It’s important to highlight that because I really want people who come from where I come from, young women or young queer people, to know that it is possible to break through and live the life that you want to live, and I like to highlight that in my music.

You recently wrote a beautiful piece for Gurls Talk in which you spoke about the responsibility you feel to continue your mother and grandmother’s legacies. Can you expand on that a bit more?

Thank you! I felt a sense of responsibility when my mum passed away. Her legacy was everything she taught my siblings and I; hard work, the value of being kind to people, and being resilient. That’s worth so much and has impacted my life in a huge way. I want to live out everything my mum has instilled in me. I want to be the best possible example for her legacy and I want to show the world that she was a person of great impact and so I’m living my life to honour her and to do right by both her and my grandma. Ultimately, they sacrificed everything for me. My grandmother sacrificed so much for my mum and my mum in turn sacrificed so much for me and I think it would be selfish for me to live a mediocre life and not give it my all. There was a time when I was feeling sorry for myself, and I said “actually Catherine, you get to make art for a living, you get to travel and perform” and there’s no way my mum could ever have imagined her life could be like that. And yeah, I’m getting to live a really charmed life, so when I put things into perspective, I feel so impassioned and want to live life to the fullest.

What are you working on now?

I’m working on my debut album. I haven’t released an album yet so I’m so excited to work on that now, so this is what this quiet time of reflection is all about – I’m laying down the foundation of the album and in the next month or two I’ll go into the studio to record. I’m really excited to release that.

Have you got a certain direction that you want your music to go in?

I’m going to be expanding on the sounds I had in the ‘Resilient’ EP, which is kind of a more hip-hop, DIY, electronic sound. It’s going to focus on my life experience and I’m toying with the idea of having it in a narrative form. I’m just having fun with it right now.