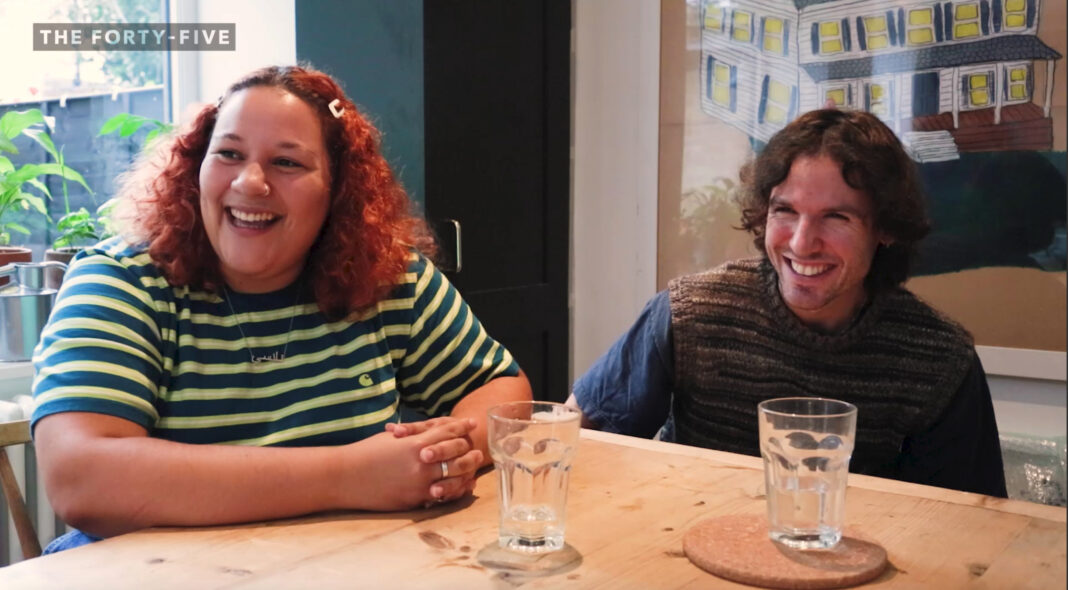 Babeheaven like to write about things they know, but sometimes it gets them into trouble. “I’ve written songs about people I shouldn’t have.” admits frontwoman Nancy Andersen, laughing a little. “The biggest example is ‘Your Love’ which I wrote when I’d broken up with my ex-boyfriend and I was so angry. But it turned out to be a really good song. I remember the first time performing it, thinking: “I hope he’s here. I hope he can hear this one!”

We’re sat around a table in a south London kitchen with Nancy Andersen and Jamie Travis, founding members of the fuzzy indie five-piece who have just put out their debut album ‘Home For Now‘. The record is a gorgeous mix of Massive-Attack inspired beats and layers upon layers of atmospheric sounds, captured by Jamie himself over a period of years, all brought together by Nancy’s dreamy vocals.

It’s been a fairly long to this road to get to their debut album release. The band formed back in 2015 but Jamie and Nancy’s journey started long before that. “Me and Nancy have known each other for fifteen years. I used to play football with Nancy’s dad in the park every weekend,” Jamie tells us.

“He played football. I would be an onlooker, a cheerleader for my dad”, continues Nancy, the conversation bounding back and forth as it tends to between old mates. “When we were about fifteen/sixteen, we started hanging out as friends and then went our separate ways again. And then when we were a bit older, we were both working on the same road and that’s when we became really good friends.”

The pair decided to form a band – a mix of boredom (Nancy) and intent (Jamie) – and the rest is Babeheaven history.

‘Home For Now”s complexity is a result, perhaps, of both Nancy and Jamie’s musical upbringing. Both their dads were in the music industry – Jamie’s, Geoff Travis, founder of Rough Trade records – and Nancy’s Toby Andersen, member of 80s group Funkapolitan and now a TV songwriter.

“I’ve literally been sat in a studio with my dad for the whole of my life,” Nancy says, with a slight eye roll. “There was a turning point when I was thirteen where I could have become a gearhead and learned loads about equipment, but I remember really clearly being like, ‘This is not my path'”, she says laughing again.

“My dad has crazy taste in music,” Jamie tells us. “He was really into hip-hop for a while. I remember being eleven and listening to a lot of The Game, 50 Cent… Just me and him in the car which was quite unexpected. I think that’s what got me into hip-hop and my production now. On the weekends, he would sit in the living room with a big bag of CDs, just listening to them and writing notes. Sometimes I’d sit and listen with him.”

Growing up in that kind of environment, the pair must have seen some things…

“Apparently my brother threw up on Morrissey’s lap in the car once and he was really not happy about that. I wasn’t involved but -“

“It felt like you were,” chimes in Nancy. “It could have been meee!”

The last five years have seen the band grow and develop both personally and sonically. While Jamie has been honing his production skills, Nancy, has been battling to overcome on stage anxiety.

“For our first shows, I would get so nervous and freak out,” she admits. “If I get overexcited, I get a migraine and I throw up – it’s really weird. That still happens sometimes if it’s a big show. But now I’ve figured out that I’ve got to go for a walk around the block, not talk to anyone for twenty minutes, try to not shout at anyone… I can be really mean sometimes! I get so in my head about performing.”

The support unit of the band has helped Nancy move past her early fears, knowing they are there with her at every show. “If it was just me by myself and I didn’t have them – Game Over.”

Musically, Babeheaven have been growing, too. When they started out, making music and performing for friends at house parties it was all a bit of a laugh. As time went on, they realised they had a shot at being a Proper Band, and started to aspire to bigger and better things.

“Access to more and more studios makes the sound develop.” Jamie tells us of the perks of hard work and getting noticed. “At the beginning, it was just my laptop.”

“Once you’ve hit that first target then you keep moving it up and up and want more and more. I’m greedy now!”, jokes Nancy. “That’s the main thing that’s changed.”

So now the album is out in the world – something that they were both really nervous about – what is next for the band?

“I think now we’ve got the first album out, then it’ll feel way easier to do the next one”, Nancy says optimistically. “But the first one – for some reason, I’ve just been like ‘No! I’m not doing that.’ But now that we’ve done it, I’m super excited to get started on the next one.”

“It would be great to tour all over the world with it – go to places we’ve never been and play, which would allow us to make the next record and keep growing”, adds Jamie.

“I want to go to festivals!”, says Nancy. “At the beginning, I was like “this is fine” but now I’m really starting to miss it.”

Listening to ‘Home For Now’, you can imagine it would be the perfect sunny afternoon soundtrack to a glorious day down on Worthy Farm, slightly woozy from a couple of 4pm ciders or a puff on something medicinal. Jamie agrees: “Playing Glastonbury would be so cool.”

Babeheaven might be home for now, but with a vaccine imminent, expect to see them fly the nest very soon.

‘Home For Now’ by Babeheaven is out now.