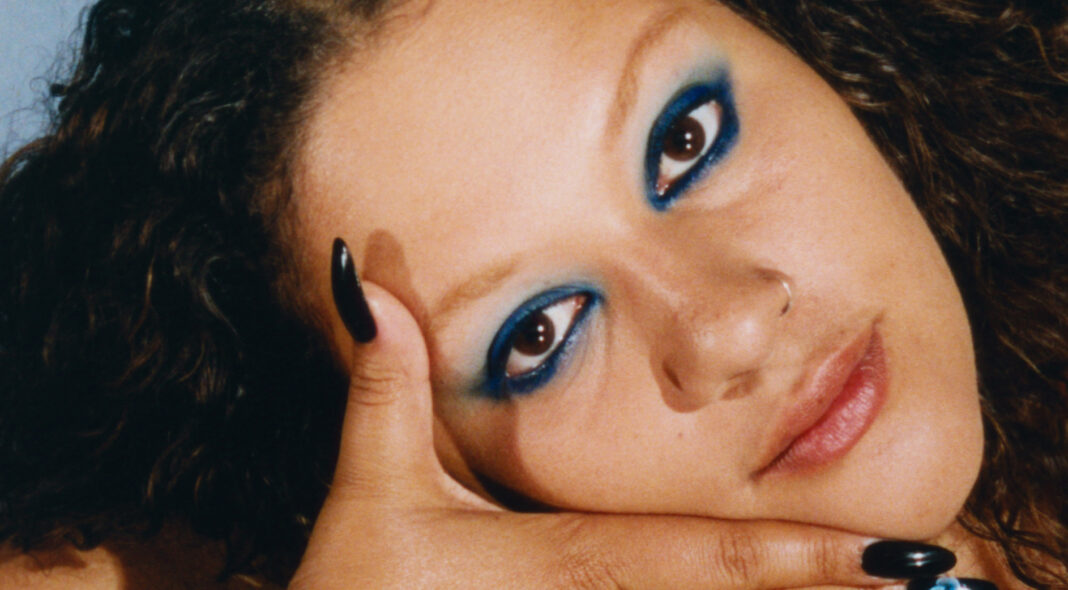 You’re in the back of a car, you’re tipsy, it’s dark, and city lights flicker past the window, bright and brief and fuzzy at the edges. Babeheaven’s debut album sounds a lot like the way this feels: a steady stream of barely rendered impressions that might, should you slow down and exit the car, sharpen into real scenes. There’s more to ‘Home For Now’ than first meets the ear: the record places as much weight on the physical experience of listening as the music itself. “I’m getting closer to the bones of you,” Nancy Andersen croons, and you feel like you could tell her everything.

Babeheaven are long-time friends. Nancy – vocalist – and Jamie Travis, instrumentalist and producer. The London pair have been piecing together a full album since the runaway success of their 2016 single ‘Friday Sky’ – playing headline shows and support slots for Cigarettes After Sex, Nilüfer Yanya, and Loyle Carner in between – but lockdown compelled them to finish the project, signing off with a title that sums up the year’s conditions.

If you listen hard to ‘Home For Now’, amid beats last heard on a Dido album, and traces of Tirzah, Portishead, and Massive Attack, you’ll also catch a range of found sounds – birds, water, alarms, laughter, camera clicks – that help to create full soundscapes. ‘Through The Night’ opens like the twin to Massive Attack’s ‘Teardrop’ but casts that aside for fleeting birdsong in a landscape of fluid, driving synth. Stand-out tracks ‘In My Arms’ and ‘Jalisco’ similarly up the pace, but these moments are easily lost to the overall swirl. Though many of the tracks are already singles, ‘Home For Now’ works best consumed whole, as if it were a mixtape. Yet there’s a touch of the lo-fi hip-hop or ‘mallsoft’ playlist about it, an enveloping lull that risks dazing its audience entirely.

Being immersive is not a total crime, however, when the songs are spacious enough for Nancy’s voice to flit between disaffection and sultry intimacy. Emotion passes like a baton between her vocals and Jamie’s production. She’s aloof on ‘Cassette Beat’, where a swell of instrumentation contains the real feeling. But on ‘In My Arms’ her voice vibrates with intensity as she asks, “What’s inside your heart? I really want to know…”

It’s as if Babeheaven find strands of swoony fifties pop lyrics floating on the breeze from a radio, and let them settle them in a new, smoother context. Bald, ambiguous lines like “every time I fall / how do I get back up for more” echo around the tracks: each song a skeleton sketch you colour with your own experiences, from the early crush of ‘Friday Sky’ to a tired, painful resolution on ‘November’. Babeheaven seem to encourage personal analogy, as if they’re the real listeners here, giving you space to fill with your own stories.

Never once breaking its unruffled countenance, ‘Home For Now’ is almost too sedate. The record goes easy on its listeners – but without being easy listening. Babeheaven don’t force you to take part in their spaced-out world, they just subtly enfold you in it – and when the moments of high emotion arrive, you’re either too dazed to notice, or you feel them intensely, as listener and participant. ‘Home For Now’ is not an obvious album – it emerges gently, as Babeheaven continue to perfect their sound, getting closer to the bones of their groove.

Like what we do? All our content is available online for free, but by supporting us with a monthly Patreon subscription, you are directly funding our talented writers and photographers.