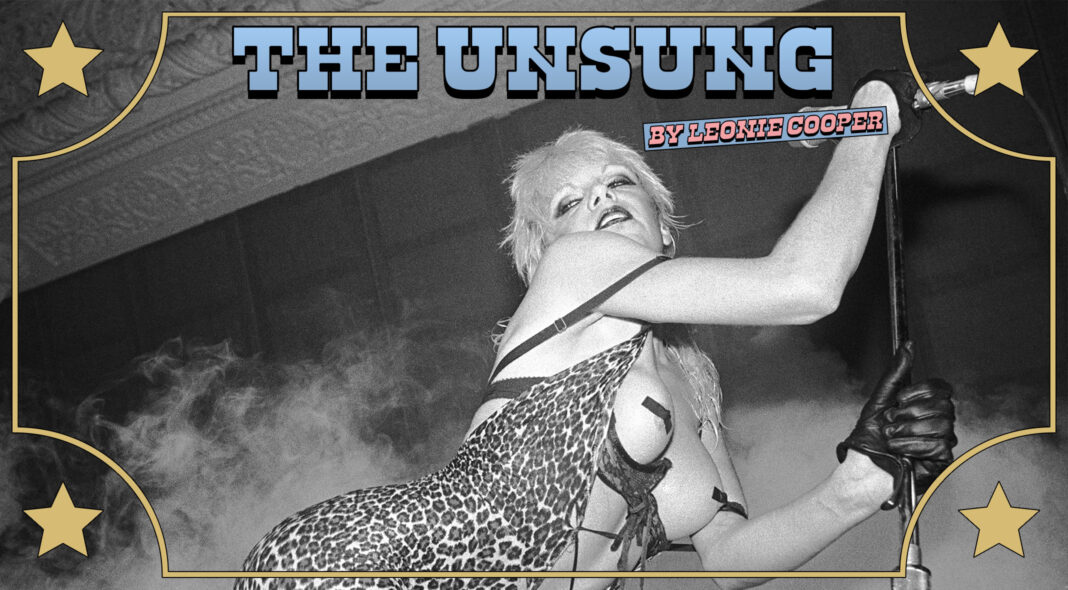 Since their inception, the unholy trinity of punk, metal and hardcore have been wildly male dominated. But it was in the early days of all three that one woman stood out amongst the boys in frayed battle jackets, to blaze her own idiosyncratic and impressively controversial trail.

Wendy Orlean Williams’ backstory reads like something from a trashy top shelf 1970s paperback. Arrested for sunbathing naked at 15, she left high school and her whitebread family home in New York State before graduating and then hitchhiked across America and Europe, getting odd jobs wherever she could find them; lifeguarding in Florida, cheffing in London and crocheting string bikinis in Colorado, supplementing her income with the occasional bout of shoplifting. In her mid 20s she wound up in Manhattan, working as a dominatrix in live sex shows and the occasional mucky movie, as well as heading up newly formed punk band The Plasmatics. It was the late 1970s and the glory days of CBGBs, but amongst the likes of the more uniform – and usually fully clothed – Ramones, Television and Blondie, The Plasmatics stood out a mile.

The band soon became CBGBs’ biggest ever draw, with Wendy’s gruff vocals and lavish performance style far more attention-grabbing than dudes in matching leather jackets could ever be. As the shows got bigger, and the band signed to London’s infamous punk label Stiff Records, so did Wendy’s on-stage activity. Like Andy McNab by way of Traci Lords, she’d fire off shotguns, chainsaw the living hell out of guitars and television sets, explode the band’s equipment and destroy full-size cars, all while basically naked and rocking a white shock of a bleached mohawk.

An anti-censorship champion, weightlifting enthusiast and staunch vegetarian who didn’t drink or take drugs, for Wendy O. Williams sexuality was another weapon in her loaded arsenal. She’d appear in bondage gear on the cover of 1981 EP ‘Metal Priestess’ and in the same year would be arrested on obscenity charges – and then beaten up by police officers – after giving a sledgehammer a blow job on stage in Milwaukee. The Plasmatics were banned from every venue in London.

Yet it was with the band’s third album, Coup d’Etat, rather than her fondness for flashing, that Wendy would truly make her mark on rock and roll. Recorded in Germany with The Scorpions’ producer, the record shifted the Plasmatics jagged punk sound into the world of heavy metal, with a cover of Motorhead’s ‘No Class’ alongside the playfully lascivious likes of ‘Put Your Love In Me’.
It would catch the ears and eyes of both Lemmy – who would duet with Wendy on a thrashy version of country classic ‘Stand By Your Man’ – and KISS’s Gene Simmons, who would produce Wendy’s 1984 solo album ‘WOW’, which would land her a Grammy nomination for Best Female Rock Vocal Performance, though she’d lose out to Tina Turner.

Perhaps the only person to ever feature on the cover of both Kerrang! and the Vegetarian Times, television work and even a rap rock crossover album – 1988’s ‘Deffest! and Baddest!’ – followed, but Wendy would retire from the stage in the 1990s, living out in the countryside of Connecticut, working at a food co-op and caring for animals. In 1998 she’d take her own life after years of depression, but her legacy remains as potent today – just ask Miley Cyrus, who named Wendy as a key inspiration for last year’s ‘Plastic Hearts’ album, the artwork of which heavily referenced the Plasmatics own chopped up typeface.

Amyl and the Sniffers

The Unsung – Dalida is France’s answer to Madonna

The songs you need to get you through Libra season