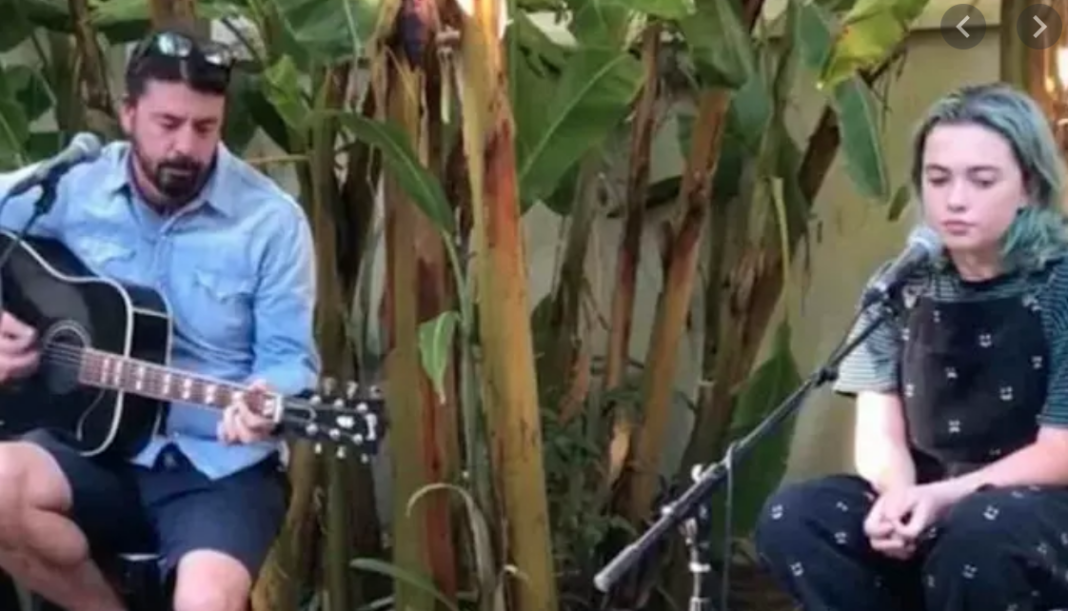 Watch this space: Dave Grohl’s eldest daughter is fast becoming one of the coolest teens on the planet. At just fourteen, Violet Grohl has already accomplished more musically than most people could dream of. Sure, it helps when your dad is the frontman of the most famous rock band in the world, but as Violet enters the spotlight more and more, she’s proving that she’s got the skill and style to make it on her own. Here at The Forty-Five, we are tipping her as having big things ahead. Here are a few reasons why she’s already a total badass.

You know how when you were thirteen you were really into Nirvana? Well, when Violet was thirteen she was IN Nirvana. At an LA charity gala in December 2019, Violet joined the remaining members of the band, Krist Noveselic, Pat Smear and dad Dave Grohl on drums (along with Beck and St Vincent, because why not) to sing vocals on ‘Heart Shaped Box’. She smashed it, to be honest.

She has good taste in music

Along with most of the world, Violet is a huge Billie Eilish fan, first being noticed after covering Billie’s ‘idontwannabeyouanymore’ with her dad. But Violet’s got her finger on the pulse of all sorts of emerging talent citing Eloise, Johnny Mathis and Finn Ronsdorf as “underrated artists she adores”.

Violet has an appreciation of movies that spans decades! Whether it’s nineties classics like Romeo + Juliet and Pulp Fiction, scare-fests like The Exorcist or eighties comedies like Raising Arizona, Violet’s taste in films is pretty banging.

READ MORE: Everything we know about Foo Fighters’ new album ‘Medicine At Midnight’

She can really, really sing

This isn’t a kid riding on dad’s talent. Violet has a pair of pipes on her! Listen to her sing Nirvana classic ‘My Hero’ at Leeds Festival 2019

Foo Fighters don’t exactly play small shows these days so when Violet went on tour with the band as a backing singer last summer, she was flexing her pipes in front of a casual 20,000 fans a night. It’s daunting enough giving a speech in school assembly but singing? In front of loads of riled up Foos fans who are there to ROCCCCCK? That takes some serious guts.

In an online meeting with Nandi Bushell – Dave’s 10-year-old drum rival – Dave revealed that Violet is a master of audio production software, Pro Tools, recently acing 100% on her school test! Firstly, why didn’t we get Pro Tools class in school? Secondly, 100%? Serious wow. The future is looking bright for Ms Grohl.