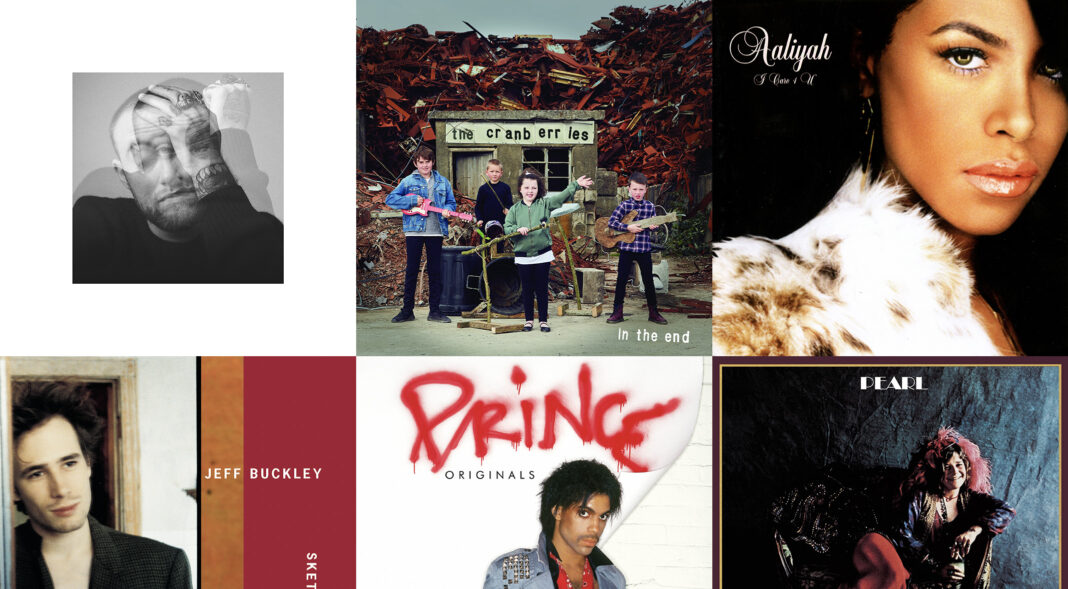 Posthumous records are never simple. For artists whose lives are cut tragically short, releasing more music might seem like the perfect way to honour their memory but there’s often no way of knowing if it’s what they would have wanted. Before they lose that choice, some artists are taking control of their own legacy now – one way or another (for Anderson .Paak, a simple tattoo will suffice). But between ethical complications, estate battles and fans desperate for more music from their heroes, here are our picks for the best posthumous albums ever.

Prince’s work as a songwriter for other artists often flew under the radar but as ‘Originals’ proves, his genius knew no bounds. Since his death in the hellish year of 2016, there have been a number of posthumous releases and reissues but ‘Originals’ is by far the most complete, featuring Prince’s demos of ‘Manic Monday’, ‘Holly Rock’, and of course, ‘Nothing Compares 2 U’.

20 years after her tragic plane crash, the streaming service roll-out of Aaliyah’s back catalogue has only just begun, with ‘I Care 4 U’ due to be released in October. The posthumous record is mostly a compilation of Aaliyah’s biggest hits, including ‘More Than A Woman’ and ‘One in a Million’. It also includes some previously unreleased gems such as mournful slow jam, ‘Miss You’.

Listening to ‘Circles’ only serves as a reminder of what a refreshing talent we lost with Mac Miller. Jon Brion, producer of Mac’s previous album ‘Swimming’ and composer of all your favourite film scores, tapped in to finish ‘Circles’ after Mac passed away from an accidental drug overdose in 2018 and the result was easily one of the best records of 2020.

The Cranberries – ‘In The End’

Irish rock band The Cranberries disbanded after lead singer, Dolores O’Riordan’s death but not before releasing one final, poignant record with her vocal demos. ‘In The End’ never shies away from the sadness of its own material and marked The Cranberries’ first-ever Grammy nomination for Best Rock Album in 2020.

Pop Smoke – ‘Shoot for the Stars, Aim for the Moon’

Brooklyn drill rapper Pop Smoke was only 20 years old when he was murdered during a home invasion but his mixtapes had already left a lasting impact on the hip-hop world. Work on his debut album was already in full swing, so 50 Cent stepped in to help complete it. ‘Shoot for the Stars, Aim for the Moon’ was released on what would have been Pop’s 21st birthday, and he soon joined the ranks of Biggie and 2Pac as one of the only hip-hop acts to ever have a posthumous number one album.

Jeff Buckley – ‘Sketches for My Sweetheart The Drunk’

Even before his accidental drowning at the age of 30, the recording process for Jeff Buckley’s follow-up album to ‘Grace’ was fraught. Deeply unhappy with his initial recording sessions, Buckley went back to the drawing board several times but his work was never finished. Demos he’d recorded across ’96 and ’97 eventually became ‘Sketches for My Sweetheart the Drunk’, overseen by his mother and Chris Cornell, among others. Buckley’s sublime work sprawled across genres – illustrated perfectly by ‘Everybody Here Wants You’, a soulful ode to Joan As Police Woman (Buckley’s girlfriend at the time of his death).

Karen Carpenter’s first and only solo album – a disco pop-inspired turn – was recorded over three years before her death, yet she never got to see its release. Deeply unpopular with the label heads, the self-titled album was indefinitely shelved but Carpenter still held a candle for it. According to the album’s producer, Phil Ramone, Karen rang him the day before she died and said “I hope you don’t mind if I curse. I still love our fucking record!”

Jimi Hendrix – ‘The Cry of Love’

The debate of whether Jimi Hendrix would have truly approved of ‘The Cry of Love’ continues to rage on, but the record is generally considered a fitting tribute to the greatest guitarist of all time, with glorious cuts like ‘Freedom’ and ‘Angel’ showcasing precisely what Hendrix did better than the rest.

Selena – ‘Dreaming Of You’

Tejano superstar Selena produced four albums before she was murdered by the president of her own fan club in 1995. In the midst of the huge outpouring of grief came ‘Dreaming of You’, her first record featuring songs in both English and Spanish. ‘Dreaming of You’ remains the biggest selling Latin album of all time in the U.S.

Elliott Smith – ‘From a Basement on the Hill’

While posthumous records are usually tinged with contextual melancholy, this could hardly be considered new ground for Elliott Smith, whose beautifully stark lyrics had always touched on his long-lasting struggle with mental illness and addiction. Yet ‘From a Basement on the Hill’, compiled posthumously by his ex-girlfriend and his producer, was all the more poignant for the ground Smith covered before his death.

Bob Marley and the Wailers – ‘Confrontation’

It’s often hard to imagine Bob Marley without ‘Buffalo Soldider’, but the quintessential reggae track wasn’t released until two years after his passing when it appeared on 1983’s ‘Confrontation’. A subsequent compilation album, ‘Legend’ went a staggering 13x Platinum in the UK and solidified Marley’s revolutionary impact on music.

Only two tracks that appear on ‘Lioness’ were planned for release prior to Amy’s heartbreaking death in July 2011 but the record wholeheartedly lives up to the subtitle: ‘Hidden Treasures’. Most notably, Amy’s rendition of Carole King’s ‘Will You Still Love Me Tomorrow?’ still leaves the hairs on the back of your neck on end.

50 years on, there’s still no voice like Janis Joplin’s. ‘Pearl’, with its seminal bohemian cover art, was released only three months after Joplin passed away, joining Jimi Hendrix in the 27 Club. With standout track ‘Me and Bobby McGee’, Joplin took the original country version, written by Kris Kristofferson, and injected her own rough, bluesy edge to make something instantly iconic.

The Notorious B.I.G. – ‘Life After Death’

‘Going Back to Cali’, ‘Mo Money Mo Problems’, ‘Hypnotize’ – these are just a few tracks on the instantly legendary ‘Life After Death’, which would end up being Notorious B.I.G.’s second and final album. Biggie’s death remains one of the highest profile unsolved murder cases in the U.S., spawning many a conspiracy theory involving the East Coast/West Coast hip-hop feud of the 1990s. One thing’s for certain: ‘Life After Death’ is one of the greatest albums of all time – posthumous or otherwise.

READ MORE: Is there ever a right way to do a posthumous album?