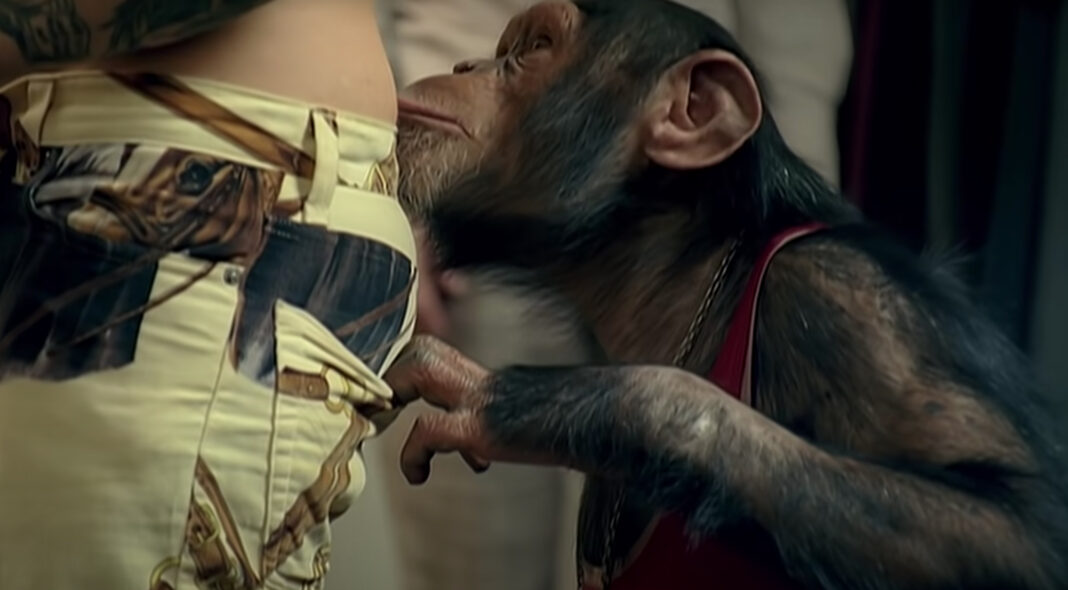 Remember music videos? More specifically, remember sitting for hours on end, flicking between Kerrang! and MTV2, devouring every pop-punk video your little heart could take? Things were different back then – not only did we have less distractions and more time to waste on watching endless music videos, they were more necessary, integral to creating an artist’s image in a time before social media. The best pop-punk videos were fun, silly, self-aware and often high-concept.

We’ve rounded up 20 of the very best, most iconic and unforgettable pop punk videos for a trip down memory lane – as always, there’s a little overlap between pop punk, emo and rock more generally, but then, there always has been:

Fall Out Boy always did self-deprecating, funny videos better than anyone, and the ‘Thnks fr th Mmrs’ video is them at their best. Self-aware and over the top, it sees Fall Out Boy being directed by a bunch of actual chimps.

Money shot: A pre-fame and pre-Kanye Kim K. being romanced by Pete Wentz before a chimp takes over.

In 2002, a 17-year-old Avril Lavigne dressed in a tie and white vest shook up pop punk forever. Seeing Avril run all over a mall in ‘Complicated’ was fun, but the ‘Sk8er Boi’ video is where she really made her mark, throwing an impromptu gig in a busy street with her friends. Anarchy, baby.

For a time, pop punk bands functioned as counsellors for hopeless teens, offering them words of wisdom for when they felt out of place. The video for Jimmy Eat World’s outsider anthem ‘The Middle’ sees the band perform at a sweaty, underdressed party while one poor kid sits fully clothed and uncomfortable. Wouldn’t you be?

Money shot: As someone jumps into the pool, the camera pans underwater, the music becoming muffled as the awkward boy grips his beer in the pool, still fully dressed.

From the second this, the debut single from their debut album “All We Know is Falling” dropped, it was clear Paramore were going to be huge. In the video for ‘Pressure’, Paramore explore various kinds of pressure and perform in a basement while the, uh, pressure builds.

Money shot: A valve finally bursts, relieving the eponymous pressure and soaking everyone in the video, including Hayley Williams, who shakes her soaked, red locks around like a real mosher.

Do you remember the exact moment you realised you were, in fact, no longer a teenage dirtbag? Wheatus’ iconic video for ‘Teenage Dirtbag’, based on the 2000 film Loser (that it also appears in), has every hallmark of the year 2000: Jason Biggs, Mena Suvari, and bucket hats.

Panic! At the Disco elevated pop punk and emo with high-concept, theatrical songs and videos, and it all started with ‘I Write Sins Not Tragedies’, in which Brendon Urie plays a ringleader at a circus-themed wedding of freaks, disrupting everything and making his band immediately unforgettable.

Money shot: All of it, really. Every single moment that Brendon Urie is dancing around in a red coat and tophat, the demented ringmaster of nightmares and dreams.

There was a time when you couldn’t switch on Kerrang! without stumbling across the award-winning ‘All the Small Things’ video. Released in the year 2000, it features Tom, Mark and Travis parodying everyone from Backstreet Boys to Britney in a fun dig at 90s pop.

Money shot: A young, gap-toothed Tom Delonge laying amongst the flowers and singing “work sucks, I know,” to the camera is weirdly endearing.

8. The All American Rejects – ‘Gives You Hell’

In the video for the incredibly catchy revenge bop ‘Gives You Hell’, two versions of Tyson Ritter live as neighbours, with one in a suburban, pastel nightmare and the other as a garage band dad.

Money shot: The All American Rejects live up to their name, rounding up their friends and a ton of megaphones to scream at suburban Ritter.

After they got big, critics were keen to point out that the lyrics to Good Charlotte’s ‘Lifestyles of the Rich and Famous’ were now somehow hypocritical. As a rebuttal, they released ‘I Just Wanna Live’, a fun, dancey departure with an accompanying video of the band being signed as a band who dresses up as food and going through some scandals.

Money shot: Good Charlotte, dressed up as food, being pelted by food by angry fans. Mad.

Canadian pop-punk band Simple Plan were an enigma, releasing mostly immature, boyish songs but also dropping sad, relatable loser anthems. In ‘Perfect’, frontman Pierre Bouvier sings an open letter to his dad (a pop-punk trope) while playing on the roof of his house. The camera zooms through the window to show very emo teens having a sad time inside, too.

Money shot: The band scream “I’m sorry I can’t be perfect”, undeterred, on the roof as rain falls down.

In 2019’s ‘Dream Boy’, relatively new pop-punk band Waterparks shake up the stale “pop-punk band annoys neighbours” formula favoured by a lot of the videos on this list by, uh, facing off with a normie neighbour and actually murdering them before dragging them away in a body bag. Fun!

Money shot: The closing shot of Awsten Knight and his bandmate dragging away the body…innovative, to say the least.

The irony of earnestly enjoying a 2004 song about a woman stuck in the past is not lost on me. Still, the 1985 video, in which Bowling For Soup play in yet another suburban garage while dressed as 80s crooners and entertaining a housewife, rules.

Money shot: Jared Reddick going full Whitesnake and lamenting the passage of time as the garage doors open. Both stunning and relatable.

‘Weightless’ is a fun, aggressively catchy song that secured All Time Low’s spot as the voice of the new generation of pop punk. The video, in which people’s thoughts (however cruel) are written above their heads, features some notable pop punk elder cameos.

Money shot: A cameo by Pete Wentz saying to Mark Hoppus that All Time Low rip off Fall Out Boy… and Mark Hoppus claiming they both rip off Blink.

Remember when people were always performing in or around pools? In the video for Sum 41’s ‘In Too Deep’, the band put on an impromptu show in a drained pool, jump into a full one, and also perform in a pool for a panel of judges. That’s a lot of pools.

Money shot: A load of moshers running and jumping into the pool, because why not.

Lesbian icons Tegan and Sara put every male band on this list’s swoopy emo fringe to shame. While they play with all genres, 2007’s ‘The Con’ is undeniably a pop-punk song. The video sees Tegan chatting to a psychiatrist while Sara looks for her, rescuing her from therapy when the therapist passes out. It plays with the familiar trope of therapy-set pop punk videos (see also Motion City’s ‘Everything is Alright’), but with a twist.

Money shot: Tegan drowning in the bath before waking up in bed – it was all a dream, or something.

The video for ‘MakeDamnSure’ cuts between B roll shots of violence and destruction and footage of the band playing in a wind tunnel, lead singer Lazzara leaning into the camera. At the end, Lazzara turns into a little boy blowing a dandelion, but, big smart concept aside, it’s really the band in a wind tunnel that makes this video memorable.

Money shot: Adam Lazzara, as always, doing a mic swing around his own neck.

Is Ashlee Simpson pop punk? Who cares! ‘La La’ is a lot of fun, and in a video that has so much sparkle overlay it looks like it was made with the kirakira+ app, Ashlee Simpson goes full emo with her choppy black bangs, jumping up and down on a van and causing some trouble. Surprise, it ends up in a party on someone’s lawn.

Money shot: For lack of a real party space, Ashlee Simpson and her mosher friends take to a launderette to eat pizza and drink beer. What could be more pop punk than that?

We can fight over what genre My Chemical Romance fall into all day long, but what we can agree on is that this video, in which the band attend (and struggle through) a fictional high school before facing off with the popular kids made the song an underdog anthem.

Money shot: Gerard Way, bursting from a whisper to a scream, yelling, “I’m not okay, trust me” before Frank Iero kisses him on the cheek.

There weren’t, truthfully, a whole lot of women in pop punk in the mid-00s. Latecomers Hey Monday, fronted by Cassadee Pope, made their debut with ‘Hold On Tight’ in 2008, and single ‘How You Love Me Now’ was released with an accompanying video in which Pope and some other moshers serve drinks to preps before playing football and partying on the beach.

In the video for ‘Beverly Hills’ a song about singer Rivers Cuomo’s “completely sincere” wish to be rich, there’s an unexpected cameo from Hugh Hefner, who invites the band to perform at the Playboy Mansion. A lesser band might have taken this opportunity to make a misogynistic video, but instead, Weezer’s friends overrun the Playboy Mansion, moshing, dancing, partying and playing games with its residents.

Money shot: Rivers Cuomo, desolate, realising that he will never in fact live in Beverly Hills as he stands against a lit-up Weezer logo, fitting in just fine.