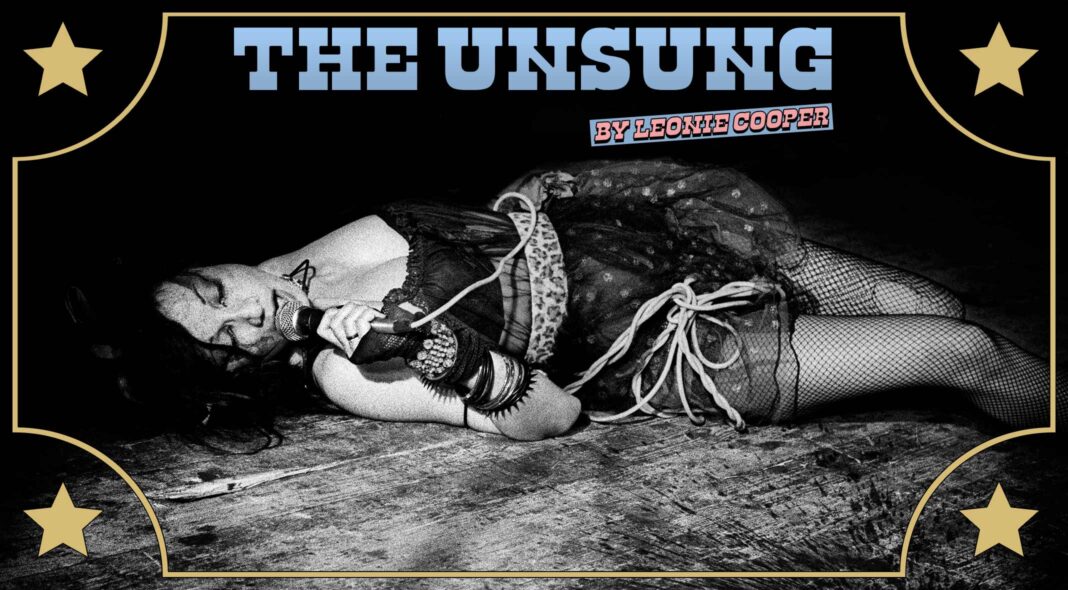 Of all the niche crossover genres, the sweetly savage sound of cowpunk has my heart in the tightest grip. Running parallel to the 1980s’ rockabilly revival, it’s a twanging, banging fusion of country music and punk rock, as sleazy as The Cramps in full leathers and as hard-living as prime Hank Williams.

With her blistered cowboy boots, X’s Exene Cervenka was perhaps the cowpunk’s most visible female champion, while Maria McKee of Lone Justice added a pop and chart-friendly sparkle to the sound. Decades later, Ohio’s Lydia Loveless and Nashville’s Those Darlins – fronted by the late Jessi Zazu – would stomp cowpunk into the 2010s.

But cowpunk’s high priestess will always be Texacala Jones, a Los Angeles scene queen born Linda Yacoubian. She was introduced to the rough and tumble sound by Jeffrey Lee Pierce of The Gun Club, whose post-punk psychobilly regularly side-stepped into a more western world. “I played guitar with Gun Club for one show, but I was so bad that Jeffrey had to fire me,” explained Texacala to Women in Rock. “We really enjoyed playing music together so we started Tex and the Horseheads.” While Motley Crue and Guns N Roses were working on their slick metal on the other side of Los Angeles, Texacala Jones was teasing her hair just as high as Nikki Sixx, but there was a dark, gothic energy to her vision. With lashings of black eyeliner, fetishwear, torn vintage dresses and more dangling crucifixes than midnight mass, Texacala’s look was mood and messy, mixing the sacred with the profane and ending up having more in common with The Damned than Tammy Wynette.

Her music was just as intense, with Texacala’s deep, guttural moan leading Tex and the Horseheads in the ceremonial swagger of their self-titled 1984 debut and its follow-up, 1985’s ‘Life’s So Cool’, produced by John Doe of fellow LA cowpunkers X. In the early days Jeffrey Lee Pierce played in the band and encouraged Texacala to hone her unique vocal style. “He really wanted me to sing even though most people found my voice horrifying,” she explained in an interview with Punk Globe. “He found it quite pleasing!” Pierce was there when the band played their very first show, opening up for hardcore band Circle Jerks at Hollywood nightclub the Cathay de Grande in 1982.

Gigs would see Texacala covering everything from Marvin Gaye to Bob Dylan in her gruff, trademark howl, as well the Horseheads’ original material. Songs like the jangling ‘Oh Mother’ are as bleak as they are fun, with flashy guitars woven into the grotty, street energy of dive bar Hollywood. This was a world where you’d spot legendary barflies like Bukowski staggering down the Walk of Fame, crossing paths with the speed-necking tearaways who lived in the infamous punk party house called – rather fabulously – Disgraceland. The scene that Texacala presided over was a trashy, whiskey-powered one, which couldn’t have helped with her various addiction issues, but certainly gave her plenty of material.

Though Tex and the Horseheads disbanded in 1986, Texacala’s eye-catching look had already launched her onto the big screen. She appeared in Penelope Spheeris’s The Boys Next Door as well as lo-fi indie flick Border Radio alongside members of The Blasters and X. Before long she was involved in another innovative project, The Ringling Sisters, an LA punk poetry supergroup. “It’s rock ‘n’ roll without the drumbeat,” she told LA Times of the mythology-steeped collective. Now based in Austin, Texas, Texacala is still making a majestic racket, heading up the Pony Island Express. Yee-ha to that.

Hear Texacala’s influence in the music of: