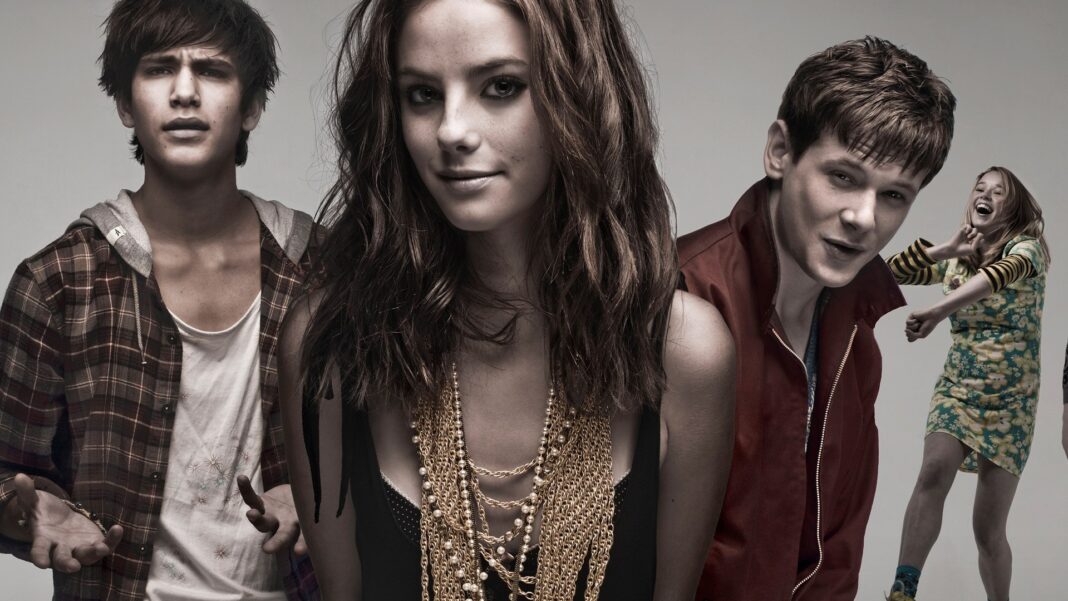 There are some TV shows that demand a yearly re-watch, and for me, Skins is one of them.

When it first premiered in 2007, all day-glo outfits and strobe lighting, I was 14, furtively watching on burnt DVDs or late-night re-runs on E4 after my parents had gone to bed. By the time the third era wrapped, I was in my uni bedroom, watching with my housemates as we got ready for our own nights out. I can barely believe that those first episodes aired 15 years ago, and yet when I plot them along the timespan of my own life, it seems strange that it hasn’t been longer.

My experience of Skins is far from unique, and the reasons it is so beloved still are obvious.  As many Twitter users have pointed out, Skins walked so that Euphoria could run; a complex mess of teenage emotions and unruly parties, dramatic soliloquies of melancholy and silly one-liners that could both be quoted with equal giddiness at school or uni the next day. While Euphoria has really amped up the sex, violence and narcotics for an arguably-desensitised 2020’s audience, Skins toed a slightly less outrageous, UK-centric line; the actors actually looked and spoke like the teenagers they were portraying, ritualistically replaced with a new ‘generation’ when their college years were complete. Even when the middle-class decadence and drug-taking adventure amped up, there was always homework and embarrassing teachers and dodgy outfits to bring it back down to earth, reminding you that these were definitively still school kids. Skins definitely played its part in the romanticisation of some of the more damaging elements of the ‘indie sleaze’ era, but there was never any question that its heart was in the right place, deeply relatable much more often than it was not.

You only need to look at the success that many of its then-novice actors have gone on to realise the value of the platform that the show was able to create, but the acting wasn’t the only revolutionary thing about Skins. Like any great youth TV show, music was absolutely central to the way we fell in love with the characters, the drama and emotion that filled each scene. Written by father-son duo Bryan Elsley and Jamie Brittain, it was the then-20-something Brittain who insisted that the Skins soundtrack should reflect the tastes of the teenagers they were casting and employing in the writers’ rooms, dipping into the ease with which MySpace was allowing new artists to be discovered. It was an approach to music synching that felt different to the hyper-glossy American opulence of The OC or Gilmore Girls, and it suited our little British show; messy and eclectic, like an iPod Nano that all your mates (and sometimes, cool parents) would dump torrented mp3’s on.

Across it’s 6 seasons (7 if you count the ‘Redux’ spin-off), there are approximately 900 songs; some full tracks, others tactical snippets to pique just the right amount of intrigue. There are endless pairings that stand out; Sid in the middle of a rave as he processes his grief to the sounds of Crystal Castles ‘Alice Practice’, Grizzly Bear’s ‘Foreground’ playing in Thomas’s episode from Season 4, the perfect, evocative homesickness and heartbreak of LCD Soundsystem’s ‘New York I Love You’ and Adele’s ‘Hometown Glory’ in the final episodes of season 2. Even when Skins was being silly, its musical choices were sincere; who can forget that ‘Wild World’ cover, or Karen’s ‘Search for A SexxBomb’ performance of original track ‘Ass to Ass”? Both were pretty cringe, but done with great comedic panache, proffering subtle fourth wall-breaking comment to the way teenagers are so often constructed in popular culture.

Making good on the show’s Bristol location, Skins was also one of the first UK shows to take the time to really showcase dubstep, intertwining it with the emerging youth culture in much the same way that they made space for a whole host of other sub-scenes – Witch House, Nu Rave and Doom Metal to name but a few. From season 3 onwards, bands and artists could even email in their own submissions, and sometimes they’d make it on, lending said band instant cool points. 2010’s indie group Dog Is Dead may not have lasted long, but their performance of ‘Glockenspiel Song’ in the closing scene of season 5 is perfect Skins folklore, capturing the glory of reckless youth; “we’re a mess/we are failures/and we love it”.

Given that the mid-noughties were very much about glowsticks, early seasons were instrumental in the shaping of underage party culture. Skins Live events made all-ages poster boys out of Foals, Does It Offend You Yeah? and Late of The Pier, and turned US bands like MGMT, Gossip, Vampire Weekend and Fucked Up into hipster household names that could be feverishly typed into MySpace or looked out for in the music press. Acting as something of an unofficial theme song, early use of ‘Standing In the Way of Control’ for the show’s original promo turned Gossip from a fairly innocuous US trio into daytime Radio One mainstays, headlining Glastonbury’s ‘Other Stage’ the same summer.

For those who wanted to throw parties themselves, Skins was a key inspiration. Tapping into the chaotic spontaneity of some of the show’s big party scenes, posh teenagers would host events in their homes and advertise them on Facebook, slamming through as many Quad-Vods and cheap pills as possible before their parents came back from Tenerife and threw a fit to the local newspaper over the damage that had been caused. The Skins parties I went to were much more likely to involve a foam cannon and one of the cast members doing an awkward DJ set/meet-n-greet, but the overall impact was the same; a space where us millennial teenagers could go and feel a little bit Cook or Effie for the night, donning our best Topshop babydoll dress and snapping as many ‘totally random’ photos as our poor digital camera storage would allow.

Like all truly great things, Skins knew when it was time to call things quits (we don’t talk about the American reboot). By keeping its concept concise and its ethos strong, it never outstayed its welcome, and has aged remarkably well, a true capsule of its time that still manages to speak to the teens of today. To dip back into its soundtrack is to find bands that never escaped the indie landfill, but also to become reacquainted with hugely eclectic artists who speak to a whole range of emotions and styles – Toots & the Maytals, Santigold, Battles, Michacu and The Shapes, Slayer. My teenage days are long behind me, but there is music in there that takes me right back to that place, to feeling like I had a whole exciting universe at the very tips of my fingers just waiting to be discovered. When it really comes down to it, isn’t that exactly how really great youth TV is meant to make us feel?