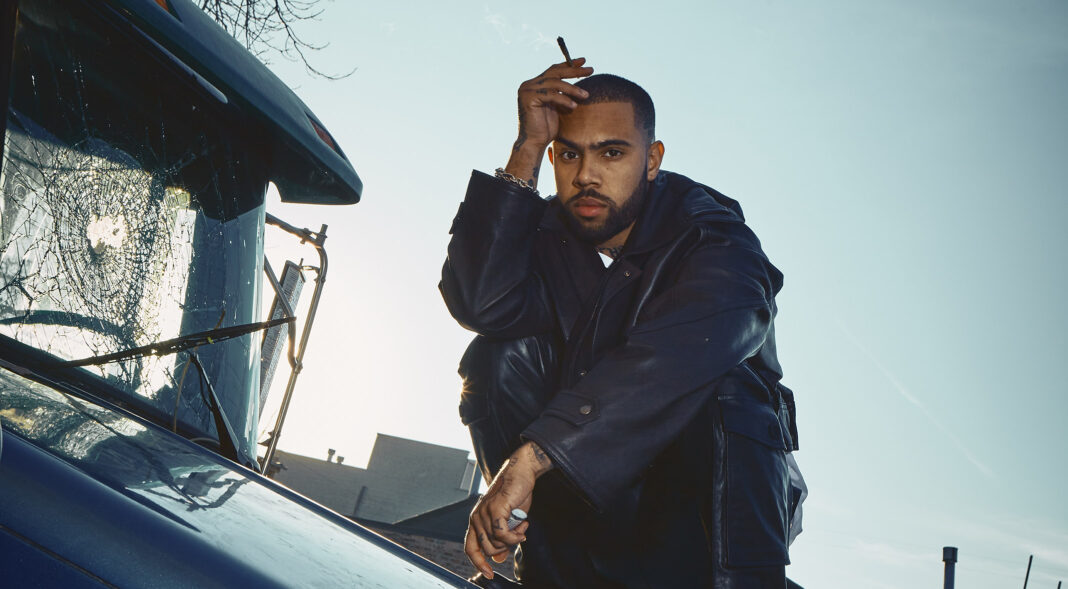 If you asked him, Vic Mensa wouldn’t say he needed a comeback. When the Chicago MC first made a splash in 2013 with ‘Innanetape’, it was a sure-fire display of potential that naturally garnered hype. Since then, he’s “made some millions / lost some millions”, formed a peculiar punk-rock side project to collaborate with the likes of Travis Barker and Tom Morello, and grappled with one of the biggest existential crises an artist can face: am I a Michelle or Kelly or am I a Beyoncé? (“Next to Beyoncé / Now I felt like Michelle and Kelly / As if my destiny wasn’t manifested for me”). While last year’s surprise ‘V TAPE’ was a contemplative and confident return to form for the rapper, his career is one defined by inconsistent returns on lightning potential – but if you’re Mensa himself, there’s a different narrative at play: “They sleepin’ on me… / But my career is rollin’, I just needed more exposure”.

In search of that exposure comes ‘I TAPE’, a sequel to ‘V TAPE’ in both name and style that sees Mensa continuing to prove what many saw in his earlier projects. The EPs rollout included a treasure hunt to find 5 hidden cassette tapes – a notably retro approach that shuns the NFT train steadily gathering steam in the music industry. When it comes to the music, the seven-track EP is devoid of gimmicks; grounded in heart and intensity, and precisely the kind of personal stories that underscore the social justice movement. For despite its title, ‘I TAPE’ isn’t as inward-looking as you might assume: there is soul-searching, of course, and Mensa can’t help but occasionally dabble in self-indulgent braggadocio but he also has the receipts. The injustices he tackles in his lyrics – police brutality, poverty, gang violence and mass incarceration of the Black community – are reflected by the non-profit work he does in his home city.

After a soulful prologue, ‘VICTORY’ is Vic’s self-proclaimed victory lap with slick wordplay emulating the late, great “Nipsey Hussle flow” and a killer beat from Jay-Z’s frequent producer, Just Blaze. Meanwhile, on ‘KWAKU’, Mensa passes the mic to his father, who recalls his journey from Ghana to the US and the fear he felt watching his son grows up amidst the backdrop of Chicago violence, and by the end, it’s no mystery where Mensa gets his political fire from.

For ‘I TAPE’ could easily be distilled as an indictment of the prison system. Sprinkled throughout the EP are phone calls with a prison inmate whose story concludes in ‘MOOSA’ – the poignant highlight that shows off Mensa’s knack for evocative storytelling. This tale – unlike countless others in the US – has an optimistic ending, one of clemency and freedom: “I got the call from his lady, three days later, he’s home free”. The track culminates in a gospel breakdown with its own miracle thanks to a feature from Jeremih, the singer who was hospitalised from Covid-19 only a few months prior.

Elsewhere, ‘MILLIONAIRES’ has the smooth, inviting feel of Kanye’s ‘Ultralight Beam’ or ‘Colouring Book’–era Chance The Rapper. Chance, a fellow Chicago native, contributes an excellent verse to the closing track ‘SHELTER’ alongside Fugees legend Wyclef Jean – just a couple in a series of well-cast features on the EP. It’s a homecoming record that proves Vic Mensa puts his money where his mouth is. Like ‘V TAPE’ before it, ‘I TAPE’ implies the existence of a ‘C TAPE’ waiting in the wings to close out Vic’s comeback trifecta and if its predecessors are anything to go by, it’ll not be one to miss.