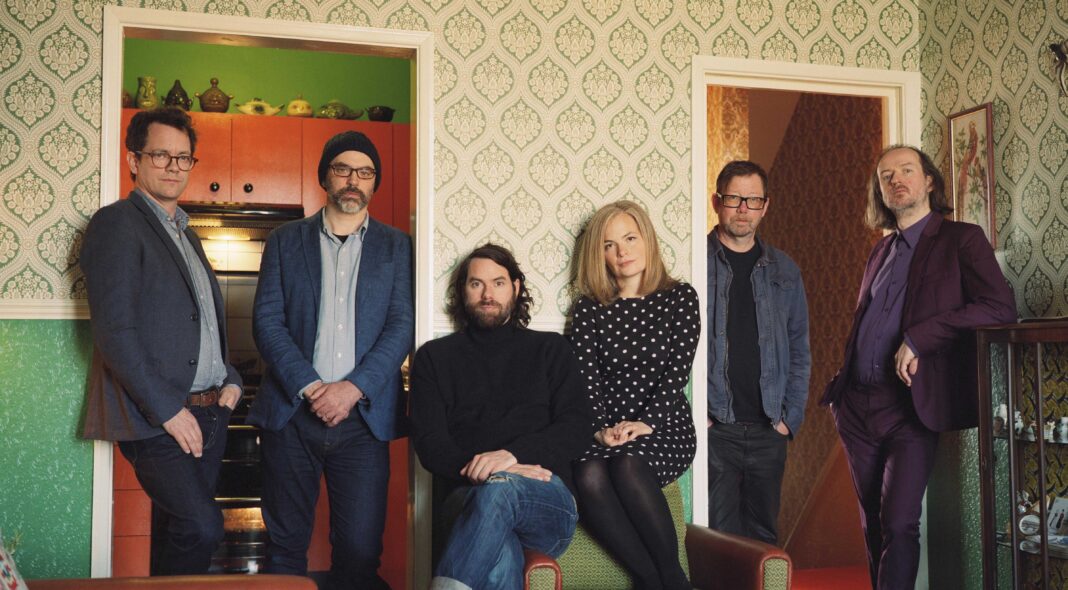 Tunng certainly aren’t the first musical act to contemplate death. Rock star departures prompt glittery bursts of public grief, folk and blues give shelter to ghosts and spirits, electronica opts for existential stupor, while pop sticks its fingers in its ears and keeps dancing. Tunng toy with all these genres, but on ‘Dead Club’ they handle mortality differently.

The first rule of Dead Club is that you do talk about Dead Club – and death. On their seventh studio album, the British six-piece shun musical escapism in favour of the beauty and communality that arise when death is freed from taboo. Not just a record, ‘Dead Club’ is a fully-fledged project: a podcast, zine, poetry, artwork, and a discussion, among musicians, writers, philosophers, scientists, health workers, and… Derren Brown. The impressive range of sources and formats breathes life into the songs. Tunng often lumber under the “folktronica” label, but in seventeen years as a band they’ve moved from an offbeat sound to readier pop. On ‘Dead Club’ their folk musicianship endures, with meticulous piano and clarinet arrangements that feel lively for a record about death – until you learn its skeleton notes are D-E-A-D.

“I can see how the dark sits inside every thought / Like a light made to be hoisted up finally,” Sam Genders sings on ‘A Million Colours’, an accurate outline of the ‘Dead Club’ project. From death cafes and Swedish death cleaning to lyrics like “You’re so scared to face the great unknown / The darkness you really need” that might well belong to a black metal song, Tunng turn gnarly concepts into palatable, even pretty truths. Opening track ‘Eating The Dead’ confronts us with the gruesome practice of doing exactly that, but Tunng find a moving poetry within: “Eat the sun that warmed your skin / Your soft hand that reached for mine / Eat the coffee and the pancakes / Eat the films and fucks in bed”. Amid a slow, mesmeric build come snippets from the accompanying podcast conversation with philosopher AC Grayling.

The music isn’t intended to stand alone, and it’s impossible to separate it from the rest of the project: the podcast seeps into the songs, poet Max Porter writes and delivers the tracks ‘Man’ and ‘Woman’ (the vernacular style of Porter and Tunng makes for a natural fit), and forensic anthropologist Sue Black’s intake of breath becomes a looped beat on ‘The Last Day’. Yet for the most part Tunng play ‘Dead Club’ sonically safe, sometimes losing too much of the emotive depth and mystery they’ve been right not to overindulge in, almost straying into musical theatre territory. At times a bit too earnest, ‘Dead Club’ could do with more of the band’s early-era strangeness.

“When it’s all gone, something carries on / And it’s not morbid at all / Just when nature’s had enough of you,” sang Scottish band Frightened Rabbits ten years before frontman Scott Hutchinson’s heart-breaking loss, lines that pre-empt Tunng’s down-to-earth openness about dying. Art too often treats death as aesthetic fuel, swerving any useful scrutiny of the subject. Bands like Tunng and Frightened Rabbit provide an uplifting alternative, any ensuing earnestness a small price to pay. Tiny Changes, a charity set up after Hutchinson’s passing, works to encourage difficult conversations about mental health. ‘Dead Club’, dedicated by Tunng to anyone who’s grieving, gently embarks on a similar, and essential, mission.