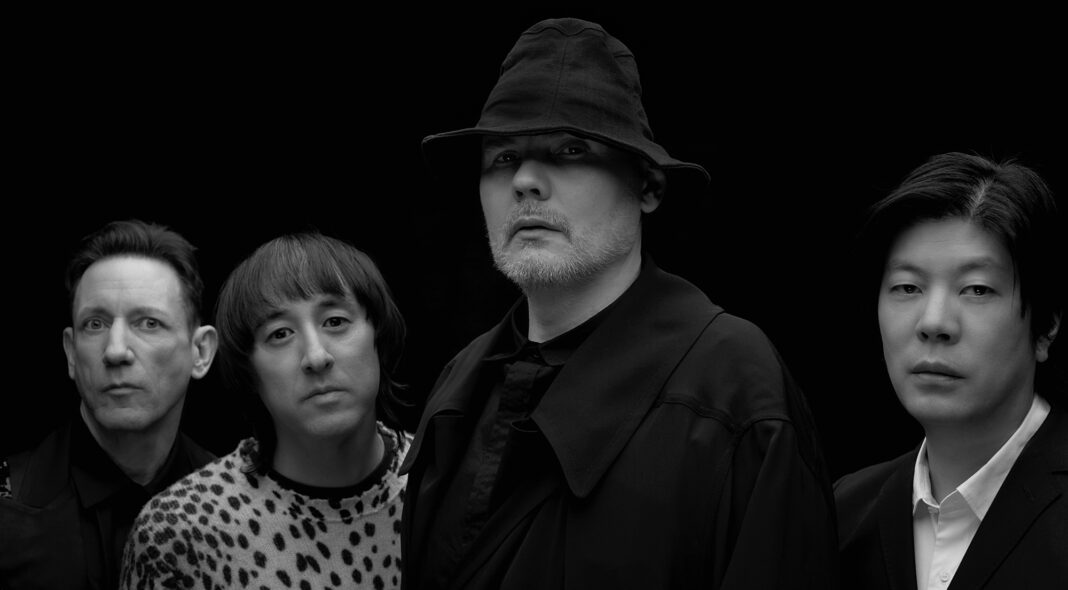 Marilyn Manson once said that Billy Corgan looks like Charlie Brown. Picture Charlie Brown as a glittery goth lord – if that’s hard to imagine, just watch the video for the Smashing Pumpkins’ single ‘Wyttch’ – and you get close to the aesthetic of their eleventh album, ‘Cyr’: Corgan a slightly incongruous frontman of a synth-rock band from another planet.

Determined to make a contemporary-sounding Pumpkins record, Corgan overshot his target, projecting the band all the way into a dark, dystopic future. The guitar-famed group (well, three-quarters of the original line-up, at least) find themselves on unfamiliar synthy terrain. To add to the apprehension, ‘Cyr’ is a groaning double album that follows the decidedly mixed first part of their ‘Shiny And Oh So Bright’ series, and it shares its birthday with the twenty-fifth anniversary of the highly lauded ‘Mellon Collie and the Infinite Sadness’. Grandiosity is guaranteed.

While ‘Mellon Collie’ came in at twenty-eight tracks long, with plenty more relegated to the cutting room floor, ‘Cyr’ contains a modest twenty songs – and some of them should have been left on the floor too. The record succumbs to the pitfall few double albums escape: it doesn’t earn the right to occupy so much space, and a fantastic single album twinkles from its murky depths. No tracks stand out as filler, exactly. Instead, ‘Cyr’ slowly melts into sameness, and by the second half, ‘The Hidden Sun’ is exactly that – a bright moment on a record grown weary of its own world.

Still, some great synth lines run through both sides of ‘Cyr’, making it a perfectly fine album to stride around to in cold November dusk. Because there are synths, every eighties band under the moon will be chucked at the album as comparatives, but Corgan’s distinctive vocals are far removed from the British tones of Depeche Mode or Duran Duran. Snatches of classic Pumpkins, from the crisp riff on ‘Wyttch’ to the overall operatic feel that recalls older songs like ‘Tonight, Tonight’, keep it from a total personality transplant. But the tracks lack the lyricism of the 1995 Corgan who wrote lines like, “To runaround kids in get-go cars / With Vaseline afterbirths and neon coughs / Galaxies full of nobodies / Giving us the farewell runarounds,” or, “The world is a vampire,” both from ‘Melon Collie’. Instead, he’s mumbling something about dolphins.

Corgan’s still got a good tune or two up his sleeve, evidenced by the strong title track ‘Cyr’, along with ‘Wrath’ and ‘Ramona’. While an annoying hand-clap dogs ‘Starrcraft’, like you’re stuck in the audience of a west-end musical, these stylised titles – ‘Wyttch’, ‘Adrennalynne’, ‘Tyger Tyger’ – indicate a commitment to the project’s theme, furthered by an accompanying animated series, ‘In Ashes’, that shows this is a tight endeavour, not half-assed.

But a malaise tugs at ‘Cyr’. You feel the band are dragging themselves through songs that want to be approachable and bouncy, yet the energy misfires somehow. Corgan tries to feed the five thousand, divvying a handful of strong synth-rock elements among too many songs. The result isn’t abhorrent, but the album’s length doesn’t suit its aesthetic, and its aesthetic doesn’t suit the band – or their Charlie Brown leader, even in his glittery eyeshadow. Half synth-rock, half witchy melancholy, on ‘Cyr’ The Smashing Pumpkins reach for something galactic, but don’t quite fill the space.