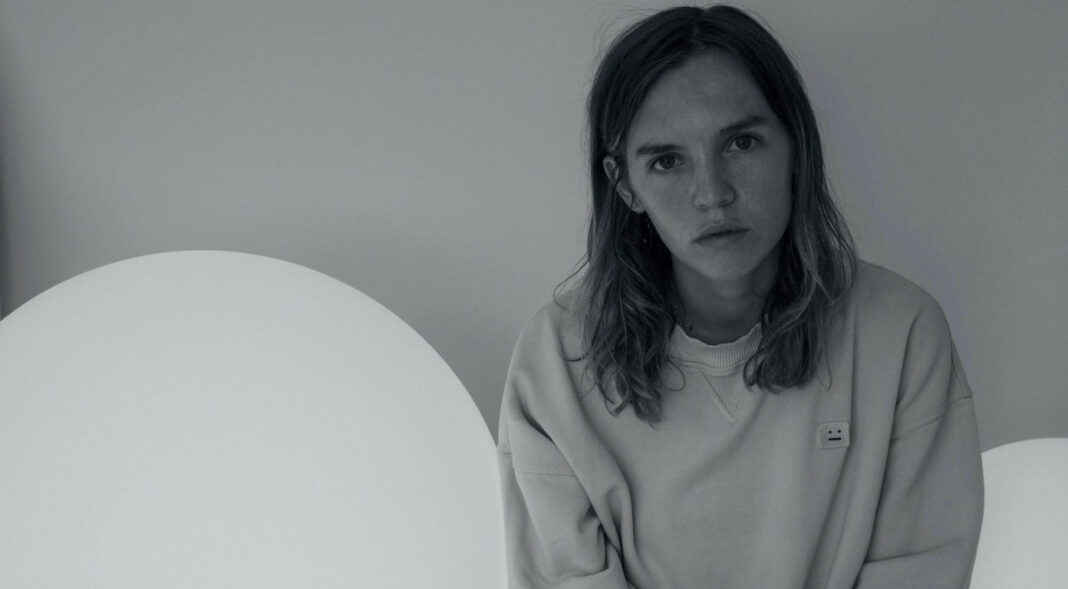 When The Japanese House’s Amber Bain released her triumph of a debut album last year, she laid her deepest emotions bare for the world to see. Tracking the intoxicating highs and lows of her relationship with fellow musician Marika Hackman, ‘Good at Falling’ proved that she could take us on a layered emotional journey after drip feeding fans with short EPs since the act’s conception. After starting her career anonymously behind a smoke screen of innocuous synthy tracks and ambiguous vocals, Bain is fully embracing her emotional growth and taking her rightful place as one of indie pop’s most alluring talents.

Having just released the final two tracks on her new EP ‘Chewing Cotton Wool’, Bain featured a topless self-portrait as the album art. “I hate getting my photo taken for a number of reasons, one of them being that I’ve always been self conscious about my appearance/body,” she writes on her social accounts. “So I found it interesting that when I was the photographer, I almost immediately wanted to take my clothes off”. This new-found confidence oozes out of Bain’s four tracks, staying true to the unapologetically honest writing that characterised her last album.

‘Chewing Cotton Wool’ picks up where ‘Good at Falling’ left off, delving into the emotions of exiting a relationship and entering a new phase. Boasting her signature qualities of strained synthy vocals, experimental samples and hazy instrumentals, all four tracks remain faithful to the innovative quirks that set her apart from the mainstream.

The EP’s opening track ‘Sharing Beds’ signals a shift in emotional energy, representing the beginning of the story in the same way that ‘went to meet her (intro)’ did in ‘Good at Falling’. Solemn piano chords lead into Bain’s frustrated vocals which ache with turmoil and anguish, “I can’t feel her/ Won’t stop goin’ through my head”. While the catchy hooks and edgy beats of ‘Something Has to Change’ makes it the record’s real pop gem. Against an infectious melody, it contemplates stunted emotional growth and the self-destructive nature of addictive routine, “And it’s the same girl who’s giving you hell…Your heart keeps breaking in the same place”.

But ‘Dionne’ is the release’s standout track, which boasts a collaboration with Bain’s folk counterpart, Bon Iver’s Justin Vernon, fresh from his duet with Taylor Swift on ‘exile’ from the ‘Folklore’ album. It’s a reflective inner battle (“I’ve been thinkin’ about my storyline/ And how your past becomes your present if it’s always on your mind”), admitting to recurring emotions of infatuation and attempts to suppress them, “And I know it’s not very sexy when somebody loves you this much…So I squash it down”. Saturated with ambiguous electro-beats and Vernon’s static drenched vocals, the optimism of the track shines through, signalling a blossoming inner relationship. Title track ‘Chewing Cotton Wool’ takes a sombre turn, packed with ruminative chords against Bain’s gentle vocals. It’s loaded with emotional ache, nostalgia and memories of an all-encompassing love that still looms heavy, “She’s the trailer for a film/ She’s the curtain at the end”.

While remaining true to the intoxicating qualities that make her music so captivating, Bain has proved she’s truly mastered the art of the extended play on her fifth one. ‘Chewing Cotton Wool’ showcases her most authentic self and all the messy emotional baggage this brings.

Willow – ‘lately I feel EVERYTHING’ review: a skilled pivot to pop-rock

45s of the week: Caroline Polachek, Normani, Chvrches and more!

45s of the week: Self Esteem, Peggy Gou, Angel Olsen and more!