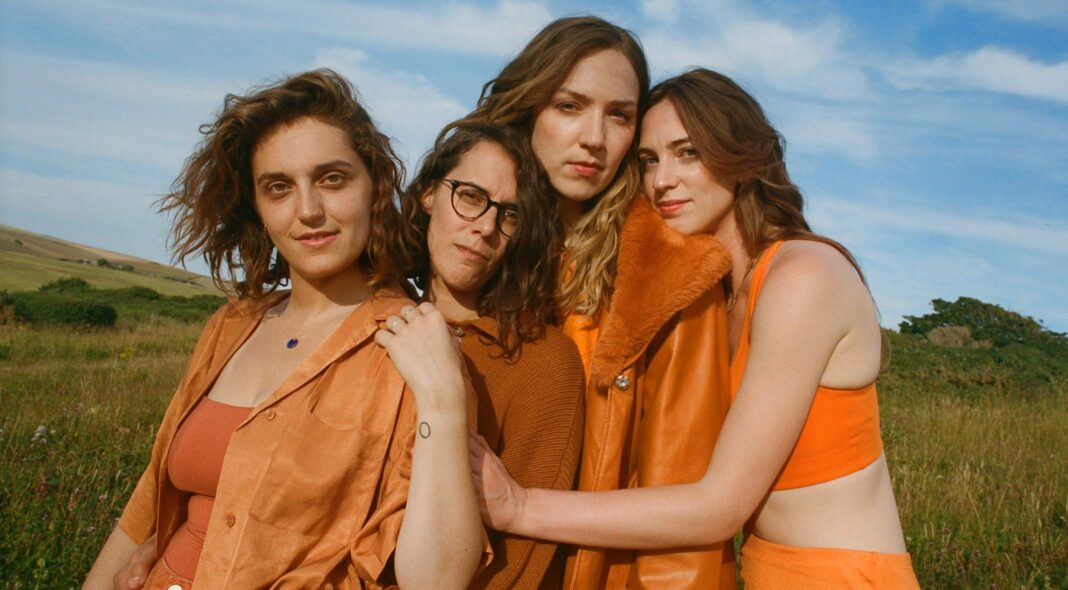 When The Big Moon titled their third album, ‘Here Is Everything’, they meant it. For frontwoman Jules Jackson, who became pregnant and gave birth to her first child throughout the uncertain and frightening first year of COVID, writing this record used up the last gas in the tank. Amidst pregnancy anxiety, sleepless nights, breastfeeding woes and the small concern that her profession had all but collapsed, she documented every moment, across eleven beautifully poetic snapshots that play like diary entries, a window into the early days of young motherhood throughout one of the most unsettling times in modern history.

But the magic of The Big Moon isn’t just in Jules’ unique storytelling. It’s a band that has always been about the collective, and never is their bond felt more than on ‘Here Is Everything’. Fellow members Soph Nathan (guitar), Fern Ford (drums) and Celia Archer (vocals, bass) didn’t know what Jules’ pregnancy would mean for the future of their band and there were times when the record wasn’t quite coming together, studio sessions not delivering the results they wanted. But thanks to Fern’s handy lockdown hobby of learning to produce and building a home studio, The Big Moon (along with their newest and tiniest member) took their time and produced their richest and most heartfelt record to date: a record about motherhood but also about female friendship and unconditional love – something this lot have in bounds.

On album opener ‘2 Lines’, written about getting a positive test result (pregnancy, not COVID), Jules asks “How does my head not split/with what’s inside of it?”. ‘Wide Eyes’, a rousing indie pop song that is so perfect it prompts actual tears, is a track about seeing through others’ eyes. For Jules, it was the eyes of her baby, the eyes of Jessica Winter who stepped in to help her with the songwriting when she was deep in a sleep-deprived haze and the eyes of her band, who let her see that songs she had no confidence in, were actually their best to date.

These moments of magnificent duality are everywhere, affording a deeply personal record to have sprawling resonance – whether you’ve procreated or not. Sonically, it’s the Big Moon indie pop we love, but layered and vast: we move between pared-back piano ballads (‘Satellites’), Velvet-Underground-esque guitar ditties (‘This Love’) to up-tempo synth-pop (‘Magic’).

From their earliest work, The Big Moon have been masters of packing raw emotion into tight indie pop. On ‘Here Is Everything’, they have waded through a brain-fuddling fog, arm in arm, to reach new giddy heights. It may have taken their all, but by God was it worth it.