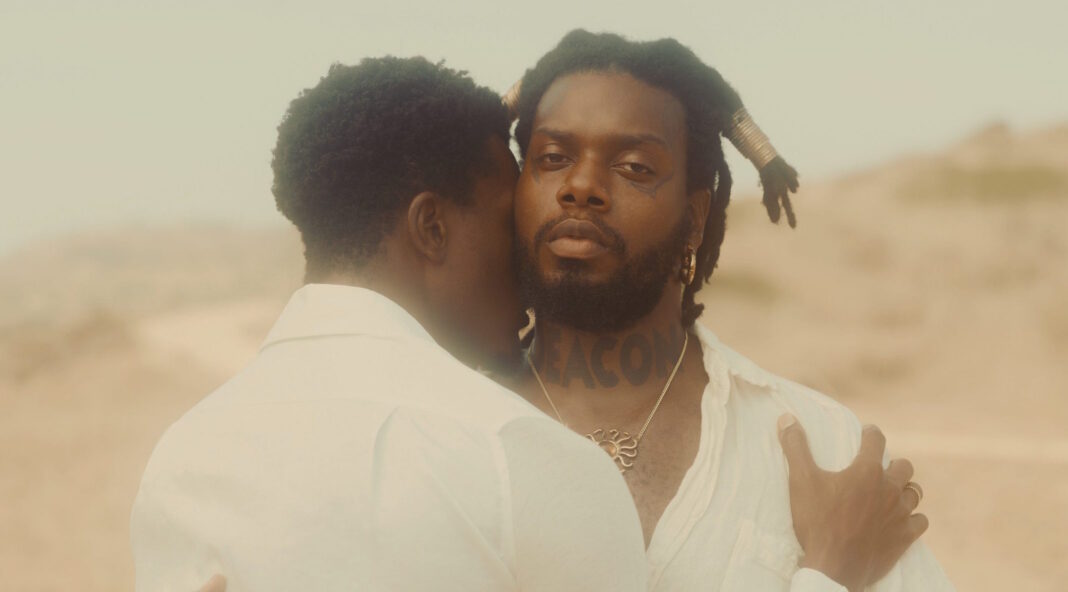 serpentwithfeet may be a classically-trained singer, but church music is his “natural cadence”, his songs the product of growing up in “a Black ass family in a Black ass church”, as he recently put it. His 2018 debut album ‘soil’ tussled with the complexities of relationships, but second LP ‘Deacon’ celebrates the joy of queer Black love. “No heavy hearts in my next year,” he promised on last year’s interim EP ‘Apparition’, and true to his word, ‘Deacon’ floats along without a care in the world.

There’s a sense of permanence to the song-titles of ‘Deacon’, which read like the chapbook contents of an eighteenth-century poet – nature, sailors, age, the names of men – signalling the religious and cultural depths serpentwithfeet plunders. Such earthiness you might’ve expected from ‘soil’, the breezier song-titles of which – ‘whisper’, ‘fragrant’, ‘waft’ – in fact describe the sonic lightness of this new record. Where ‘soil’ shouldered heavy production and even heavier emotion, ‘Deacon’ strips away layers of hurt, pain, and hate, and only love and happiness remain.

You hear it in the carefree pop bounce of ‘Sailor’s Superstition’ and the tight snap of ‘Amir’, which channels the R&B energies of Janet Jackson, Brandy, and TLC. You hear it in the reverb, repetitions, and stacked harmonies he arms his honeyed voice with, and the joyous vocal play – trumpet imitations, Prince-like sighs – of ‘Same Size Shoe’. “Me and my boo wear the same size shoe”, he sings, the line a stand-in for stories of trauma and suffering that often overshadow tender, uncomplicated expressions of love.

Serpentwithfeet’s music is frequently visceral, physically bound to whatever emotion he may be feeling. On ‘Deacon’ that tactility emerges as serene hedonism, from the drawn-out desire of ‘Wood Boy’ to the long-term stuff of sunsets on ‘Old & Fine’, visualised in the long slow breakfasts and beach embraces of the album’s music videos.

He’s reverential about the weather, too. Opener ‘Hyacinth’ saturates your bones with the first warm sun of spring, while on ‘Heart Storm’ he dances in downpours with guest Nao. Meanwhile, interlude ‘Dawn’ tailors the hymn ‘My Lord, What a Morning’ to salute the Californian light – serpentwithfeet recently moved from New York to the west coast, and boy do you hear it in his work.

But ‘Deacon’ works as a happy, loved-up album mostly because serpentwithfeet swerves sickly platitudes, instead zoning in on smaller intimacies. “Come over here / Missing your beard,” he repeats on ‘Derrick’s Beard’, an understated refrain shrouding a wealth of emotion. He imbues arbitrary words like “hyacinth” and “downpour” with all the fullness and intensity of love, deconstructing and rebuilding their syllables the same way he deconstructs religious vocabulary and delivers it back with new meaning.

At the end of the video for ‘Same Size Shoe’, serpentwithfeet thanks “all the icons who remind me to be infinite”, influential Black artists like filmmaker Marlon Riggs and choreographer Jonté. ‘Deacon’ ends on a similar note of community with ‘Fellowship’: alongside Sampha and Lil Silva, he sings “I’m thankful for the love I share with my friends”. From any other, this could read like a hollow Instagram graphic: but by the musical power vested in him, serpentwithfeet embraces such sentiments with justified magnitude.