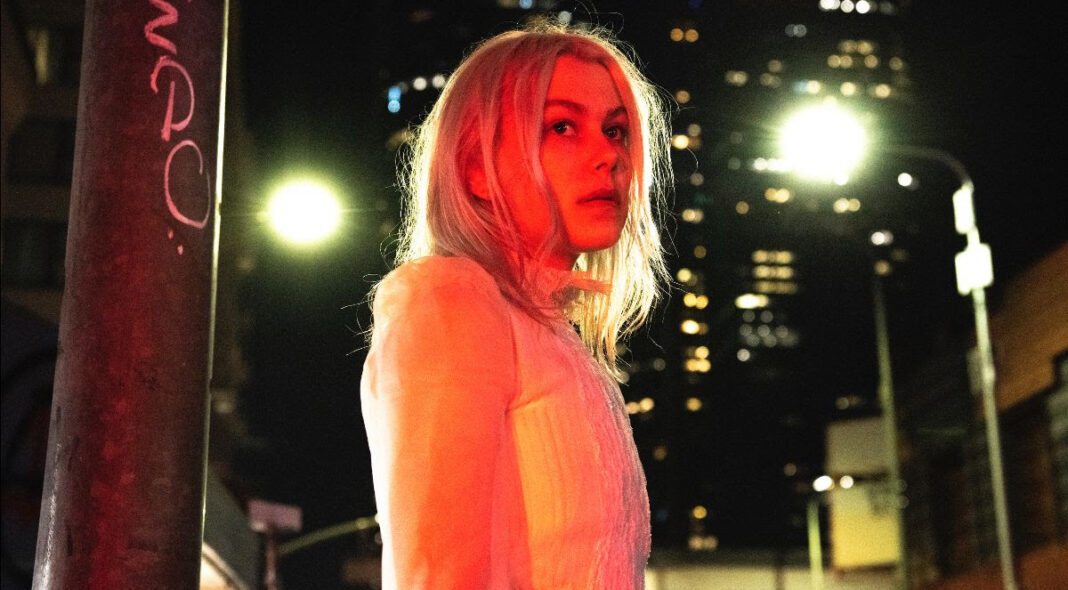 To be human is to be complicated – a fact that, despite all of us being intrinsically aware of it, can get overlooked when we’re thinking about our favourite music. We often expect our songwriters to inhabit one emotion, one way of being and react with surprise when they spill over into something else. Case in point: the wonder expressed when people realised the devastatingly sad songs that made up Phoebe Bridgers’ debut album ‘Stranger In The Alps’ also possessed belly laugh-inducing bits of wicked humour.

Rather than write specifically and single-mindedly about being down in the dumps, the LA musician pens songs about life and all of its intricacies and contradictions. There is sadness in her light and playfulness in her dark. The things she documents might include relationship break-downs and complicated familial ties but then she’ll twist things up and crate magic out of surreal dreams or her love of Elliott Smith.

“We can be anything,” Bridgers offers on ‘Halloween’, one of the more hushed, musically fragile songs on her second solo album ‘Punisher’. In the song, it’s an outstretched hand to a soon-to-be ex, but it doubles as a mantra for existing. The 25-year-old takes her own advice on the rest of the record, allowing herself to feel, not feel; dream, or stay rooted in the harsh light of reality.

On ‘Garden Song’, she escapes into a vivd other world, one where she’s ominously serene as she hints at burying “your skinhead neighbour” in her garden. Seconds later, she’s reminiscing about hopping fences at botanical gardens as a teen and delivering one of the album’s most stunning lyrics: “The doctor put her hands over my liver/She told me my resentment’s getting smaller.” By the song’s end, Bridgers is softly satisfied, repeating, “I’ve got everything I wanted” until the dream fades.

She’s back in it a couple of songs later, though, when the album’s title track carries her into a cocoon of plucked strings, gentle piano and fragments of burbling electronics. “What if I told you I feel like I know you/But we never met?” Bridgers whispers, referring to Elliott Smith, one of her heroes. “And here everyone knows you’re the way to my heart/Hear so many stories of you at the bar.” As she drifts around LA, past Smith’s old house and 24-hour pharmacies, she imagines what she’d do if she met him. “I can’t even open my mouth,” comes her conclusion. “Wouldn’t know where to start, wouldn’t know when to stop.”

Bridgers is great when she’s in her head, voyaging through her imagination, but she’s even better when she’s writing about real life. ‘Kyoto’, a surging rush of trumpet-driven indie rock, finds her in Japan, but only longing for home. “I wanted to see the world/Then I flew over the ocean and I changed my mind,” she cries. On ‘Graceland Too’, she describes the kind of absent-minded thoughts that accompany long drives over gorgeous folk melodies. “Predictably winds up thinking of Elvis/And wonders if he believed songs could come true.”

There are moments when the musician’s lyrics hit like a punch in the gut, their simplicity and directness masking the power behind them. “You couldn’t have stuck your tongue down the throat of somebody who loves you more,” she tells a crush on the brushed acoustic strums of ‘Moon Song’. “So I will wait for the next time you want me/Like a dog with a bird at your door.” Her songwriting is effortlessly three-dimensional, elevating everyday occurrences into poetic majesties. “But you had to go, I know, I know, I know,” she sighs on ‘I Know The End’. “Like a wave that crashed and melted on the shore.”

That song marks ‘Punisher’’s grand finale and it encompasses much of what Bridgers is about – quiet ruminations on being alive that sometimes explode into something bigger, louder, grander. “I’m not afraid to disappear,” she sings, the delicate guitar lines that opened the song frantically building into a cacophony of noise. “The end is near!” she and a group of all-star friends (including Conor Oberst, her boygenius bandmates Lucy Dacus and Julien Baker, Warpaint’s Jenny Lee Lindberg and more) chant, triumphantly welcoming the apocalypse. Even in the face of the end of the world, Bridgers has time to remind us she’s not just the poet laureate of heartbreak – after the music comes to a halt, she’s left comically spluttering through hoarse, hushed screams.

Bridgers has spoken about growing more confident in her songwriting in the years since ‘Stranger In The Alps’ and ‘Punisher’ sparkles with quiet self-assurance. So it should – it’s one of the year’s most beautiful records so far; a poignant tribute to life’s twists and turns.