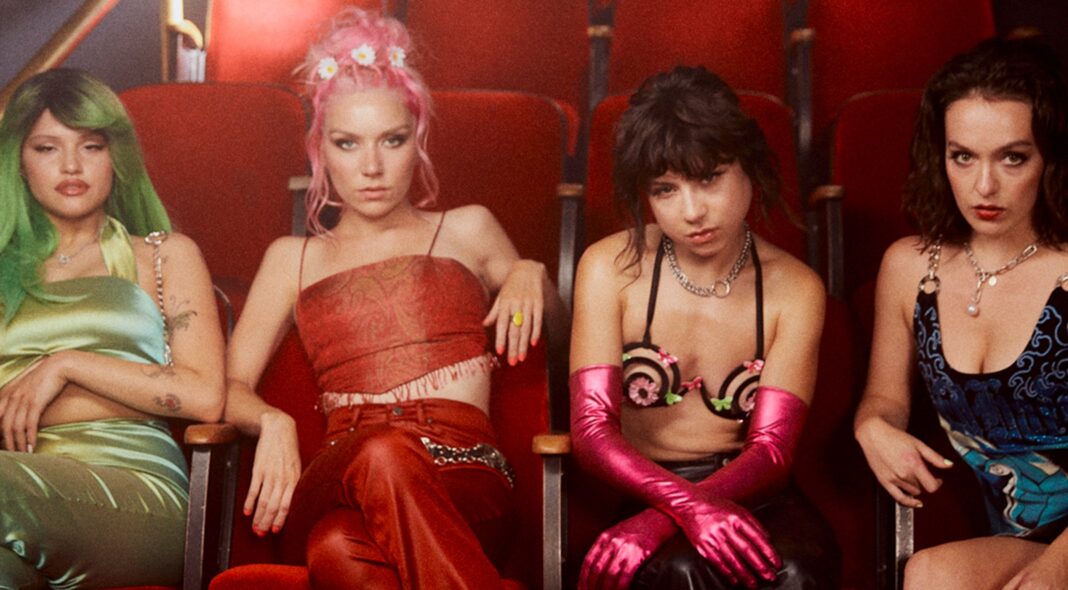 So far, Nasty Cherry’s discography feels like a dress-up box of pop: debut single ‘Win’ with its New Order bassline, the Sky Ferreira tones of ‘What Do You Like In Me’, the HAIM-like ‘Better Run’, Prince girl group flourishes, and Charli XCX cast-offs. Across their previous two EPs, ‘Season 1’ and ‘Season 2’, the British-American girl band try on different pop moods with flair, in no hurry to pin down their own identity. They’re too busy having fun simply being in a band.

“We’re so new, our birth was televised,” they sang on ‘Season 2’ – cameras followed the Charli XCX-assembled group on ‘I’m With The Band’, a 2019 documentary series charting their formation. While Charli had a hand in their debut EP, ‘Season 2’ was an entirely Nasty Cherry affair, abandoning Icona Pop-style chorus shouts for more personal, introspective songs. A third EP puts even greater distance between the fledgling popstars and their televised beginnings, though Charli’s back as co-writer on the ‘The Movie’s lead singles, ‘Her Body’ and ‘Lucky’.

As with their previous EPs, ‘The Movie’ is succinct – barely grazing fifteen minutes – and contains no mind-blowing surprises. The singles prove to be the strongest songs. ‘Lucky’ slows down Robyn’s ‘Dancing On My Own’ synth line, stepping off the heartbroken dancefloor and into a love so potent and all-consuming there’s talk of hell, graves, flames, and being burned at the stake.

Meanwhile, a cheating lover gets the fuck-you treatment on stand-out stinger ‘Her Body’: “How’s that working out for you / Jumping between two bedrooms”. It’s a welcome shift from their earlier bouncy pop platitudes of polite strangers – the band barely knew each other at the time of their first EP – to more specific, vulnerable emotion, the kind shared between close friends.

‘The Movie’ is otherwise fluffy: guitar-squealer ‘Six Six Six’ sits at odds with the record’s sleek sound, ‘What’s The Deal’ sounds like a half-remembered noughties emo-indie song, and ‘All In My Head’ borrows heavily from Nilüfer Yanya’s low, layered style. But these are still relatively early days for Nasty Cherry, who strike occasional gold as they continue to try on glittery pop outfits, almost ready for their full-length.