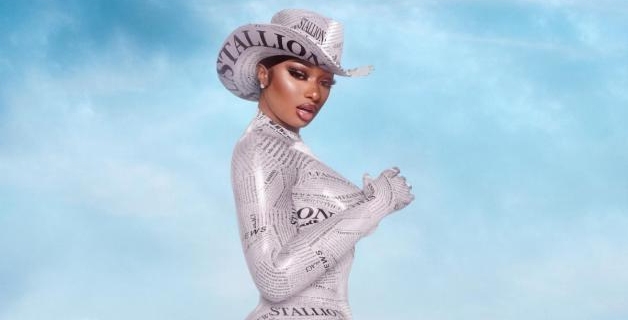 Good news is in short supply these days – which makes it the perfect title for an album that’s determined to buck the negative mood and confidently own its name. Megan Thee Stallion’s ‘Good News’ is technically her debut record, but this ain’t her first rodeo, as she reminds you on track ten, adding “the real hot girl shit” to a rework of Juvenile’s ‘Rodeo’. She’s already defined two summers in a row, from 2019’s ‘Hot Girl Summer’ to 2020’s ‘WAP’. She also strode into the centre of many of this year’s biggest issues, from racism and the position of Black women, to police brutality and Republican politics. Oh, and there was the small matter of getting shot.

Opening with a song called ‘Shots Fired’ is a serve in itself given the well-broadcasted July event in which Megan was fired at twice in the foot. Not only does she roast her alleged shooter, Tory Lanez, over and over, she highlights the incident in a wider scope with the line, “Now here we are, 2020, eight months later / And we still ain’t got no fucking justice for Breonna Taylor”. Under Megan’s watch, these overt references never seem clunky or tick-boxy. She wields the vocabulary of 2020, whether it’s political rage, quarantine, or ASMR, like a total professional, ensuring her point hits home every time.

It’s part of what makes her, at the core, a really fucking good rapper: funny, with a tight turn of phrase and flow so clear-cut you can’t keep still when you listen. “Invest in this pussy, boy, support Black business,” is the stand-out contender for strongest (and wittiest) moment, but the quieter lines are worthy too, from the role reversal of “Damn, he probably wanna wear my hoodie,” to references to Naruto, Buffy, Mean Girls, and The Lion King that keep her real and relatable.

In fact, the album’s only real misstep is when Megan sings instead of raps, on synthy ‘Don’t Rock Me To Sleep’. The sideways venture isn’t terrible, just unnecessary for a record so steeped in rap talent and ancestry. ‘Good News’ is packed to the hilt with hip-hop references and seamlessly layered samples, Megan claiming her place in the canon via Naughty By Nature, Fat Pat, Michel’le, Dr Dre, Snoop Dogg, Eazy-E, Biggie, and countless others. She covers contemporary ground too, with a slew of collaborators that include SZA, Young Thug, Big Sean, and Popcaan. Even Beyoncé appears to bend to Megan’s sound rather than the other way around on ‘Savage Remix’ – it’s ballsy as fuck, and it works.

Megan Thee Stallion knows better than most that living well is the best revenge. Her occasional reminders of a turbulent year – “bullet wounds, backstabs, mama died, still sad” – contain zero self-pity. Instead, a relentless optimism fuels ‘Good News’, in its rich belly laughs, dancefloor-ready beats, glorious put-downs, and unabashed enjoyment of sex. This is classic rap that sounds completely fresh, with feet equally in present, past, and future. ‘Good News’ is a huge, energising fuck-you to 2020, every bit of it – which is really the only way to end this year.