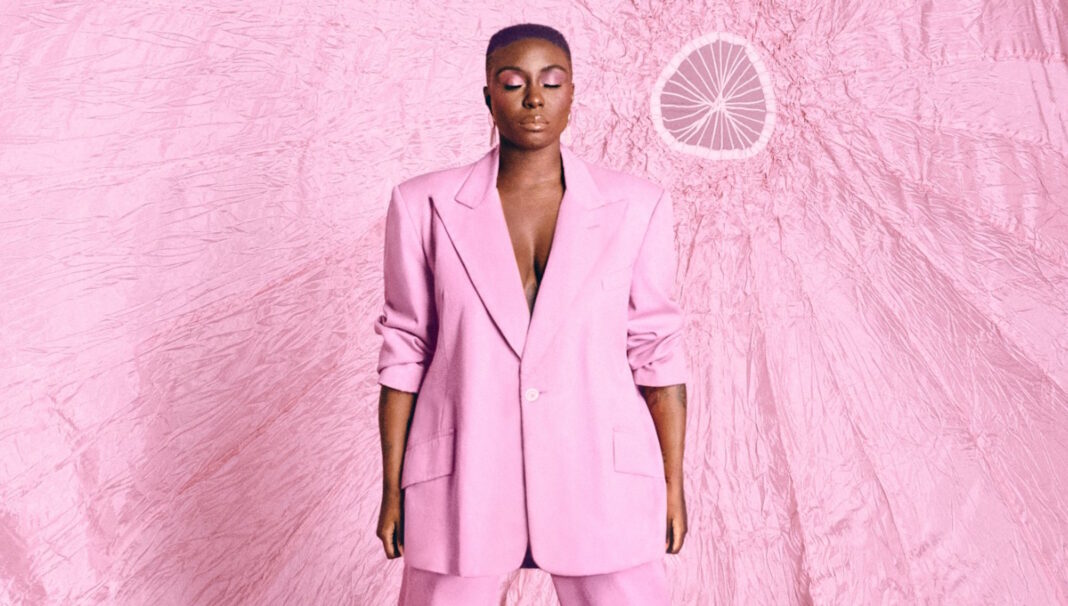 Breaking up by email is never an okay thing to do. In 2017, British singer Laura Mvula found herself on the receiving end of such an unwelcome missive – not from a cowardly ex-lover, but from her record label. The tone was curt, corporate, deeply impersonal. The emotional fallout hit hard.

Four years on, Mvula returns with a new label hanging off her arm, and new armour to match: shoulder pads, thigh-high boots, strapped-on keytar, and Roland TR-808 reinforcements. Call ‘Pink Noise’ a break-up album if you like, though really, it’s more of a power move: dazzling instead of caustic, triumphant instead of sour.

You wouldn’t necessarily expect Mvula to go eighties a la Dua Lipa or The Weeknd. She’s classically trained, grew up in the church, composes for the Royal Shakespeare Company, and her 2013 debut album ‘Sing to the Moon’ was hailed for its sophistication. Then again, you wouldn’t expect Sony to drop an artist with such sure-fire credentials: mates with Prince and Nile Rodgers, Brit and Mercury nominations, a second album – ‘The Dreaming Room’ – that won the 2017 Ivor Novello award. Somehow it still wasn’t enough, and in the middle of a professional and personal whirlwind, Mvula was left to freefall.

“What kinda magic / Poof poof and then vanish / Drop me at the ground zero / Another blow to my ego,” she sings on ‘Conditional’, the second track from ‘Pink Noise’. The album contains plenty of similar lyrical catharsis – fraught, frustrated lines: “Who do you think you are? / You don’t write the story, baby.” Yet ‘Pink Noise’ is Mvula’s attempt to do just that: write the story, not just with her words but with a mighty sound.

Her spark rekindled after touring with David Byrne on the UK run of his ‘American Utopia’ tour in 2018, Mvula signed with Atlantic, then laid new groundwork with an EP, ‘1/f’, that re-kitted some of her previous songs in eighties garb. After years of her music being dubbed “pop but it’s not pop, it’s jazz but it’s not jazz, it’s classical but it’s not classical, it’s black but it’s not black” – a symptom of the industry’s inability to cope with Black artists who don’t fit neat boxes – the clearly-defined sound, rooted in the disco and soul that speaks to Mvula’s spirit, was a relief.

Those tight rhythms, twinkling synths, and vivid grooves are here to stay on ‘Pink Noise’. The production really is straight out of the eighties: the drum claps and synthesised cowbells on ‘Church Girl’ keep the spirit of Whitney Houston alive, ‘Got Me’ bounces off the walls with its buoyant percussion, and ‘Magical’ belongs on the high school dance-floor of a teen rom-com.

Mvula’s soulful gospel vocals – as turbo-charged as Annie Lennox or Yazoo’s Alison Moyet, but uniquely hers – save the album from being completely derivative. The songs do occasionally stray towards Radio 2 playlist territory (not helped by a puzzling cameo from Biffy Clyro’s Simon Neil). But this is loose, light, free pop music, big without being heavy, propelled by a strong sense of relief that buffets away tired clichés.

Mvula has spoken openly about her anxiety, and the new album sticks it to her personal demons as much as faceless industry figures. Not just a pretty title, pink noise is thicker and lusher than the relentless wash of white noise, and informs the record’s bright, unapologetic stance. And in the same way that everyone needs to sweat on an eighties dance-floor every so often, ‘Pink Noise’ is clearly the album Mvula needed to make right now. And for that reason alone, it works.

Stick that in your inbox!