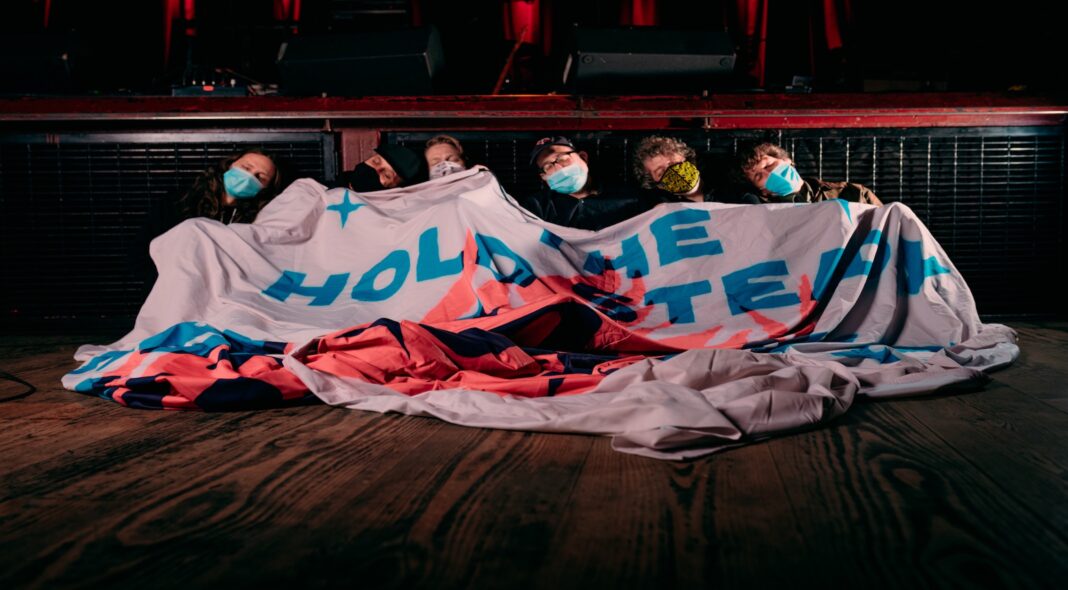 When Craig Finn sang “Damn right you’ll rise again” back in 2005 on ‘Separation Sunday’, The Hold Steady’s second album, he was addressing Holly, the junkie hoodrat who drifts through their entire discography. He was also unknowingly addressing the future of his own band. Subsequent years saw a tumble of highs and lows for the Brooklyn indie heroes: from releasing ‘Stay Positive’ and playing with Bruce Springsteen at Carnegie Hall to squeaking to a plateau in the 2010s. But on the opening track of their eighth record ‘Open Door Policy’, Finn sings, “Along the way we lost the flame / But there’s burners in the kitchen”. And you’ll find The Hold Steady in the kitchen at this party, by the burners, rising again.

In 2019 ‘Thrashing Thru The Passion’, a loose album of mostly singles, lifted the band out of a mid-period slump in which they’d rubbed away the grit for a slicker sound, losing illustrious keyboardist Franz Nicolay and their own distinctive magic in the process. The return of both the prodigal Nicolay and the low-pressure aura of their early records raised hope in veteran fans: could a follow-up to 2008’s brilliant ‘Stay Positive’ be on its way?

‘Open Door Policy’ finds The Hold Steady fine-tuning old tricks: exultant riffs on piano and guitar, bar-band brawls buffed up to a gleam by producer Josh Kaufman. Finn’s arch, cinematic storytelling continues to give Conor Oberst and Raymond Chandler a run for their money, too. The Hold Steady’s wildest ruse is that their music can carry such thorny lyricism, not a syllable wasted, and still punch.

Across ten grand, murky narratives, the glamour hooks you in and the reality spits you out. The usual recurrent cast of partying desperados, doomed dreamers, and burnouts wrestle with human concerns – religion, technology, wealth, health – still buoyed by hapless optimism, but heavy with history now. The songs are as steeped in Catholicism as they are cocaine – a sense of age fortified by the presence of haunted hotels, clanking shackles, castles, pistols, and pipes. But among the ghosts of shipwrecked sailors are ghosts of friends, too: “That girl in last year’s picture / is now haunting her own hallways.”

For two decades of drug-soaked survival have taken their toll. Ill-fated reunions and anti-psychosis meds, hospital paraphernalia, losing friends, learning that “depression isn’t kidding”: an almighty resignation runs through the record, in what Finn calls “the tragic conclusion of instincts and old habits”. The characters are sober, even when they’re not actually sober.

Still, the record sure doesn’t sound downhearted. ‘Open Door Policy’ is a lively affair – at times even jubilant. ‘Family Farm’ could be a sequel to ‘Stay Positive’ (the song), with the happiest key tinkle you ever heard and a triumphant blast of ska horns that lingers across the following two tracks, ‘Unpleasant Breakfast’ and ‘Heavy Covenant’. Springsteen-esque major chords, long classic rock licks, kick drums, and organs keep up rest of the pace. A real joy of music radiates from the band, from their own playing to the classic song titles laced into lines: “He said it’s just a reminder love will tear us apart” / “She came into the cantina singing this must be the place” / “Records are so heavy and you can’t hurry love”.

Those veteran fans will find their hopes fulfilled on ‘Open Door Policy’. The band have matured without losing their undying optimism and ear for fun. But it wouldn’t be The Hold Steady’s best album since ‘Stay Positive’ without those years in between, to prove the power of endurance, to ride a bumpy road in greater sympathy with their fraught characters – and to have a place from which to rise again.