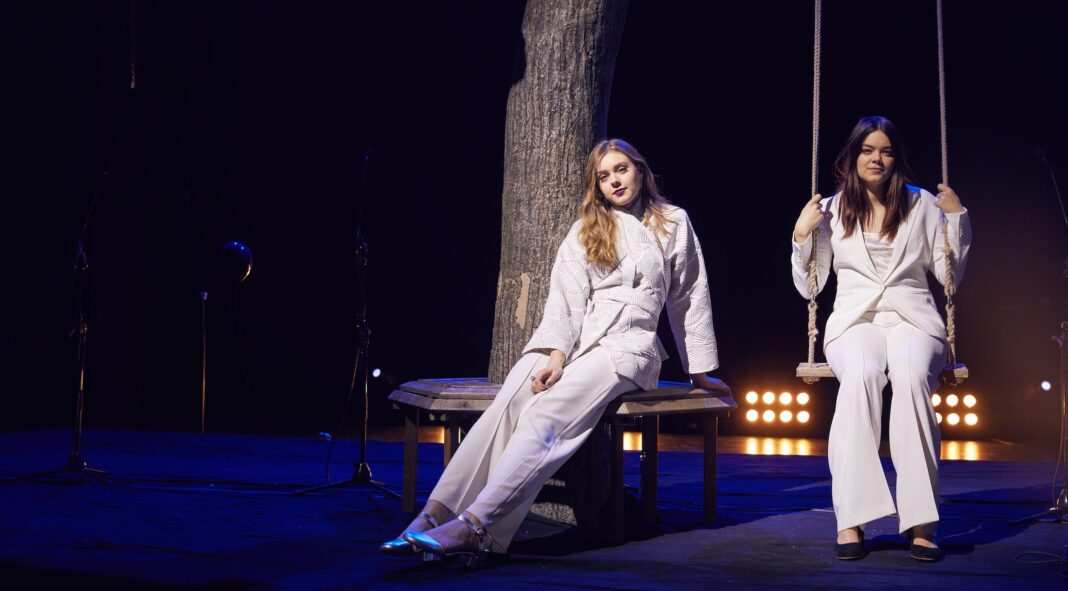 Since 2007, Swedish sisters Klara and Johanna Söderberg of First Aid Kit have fine-tuned their brand of folk and country pop: Americana with all the heartache of ABBA. They wear their beloved musical heroes on their sleeves, song-writing luminaries like Johnny Cash, Emmylou Harris, Bob Dylan – and, of course, Leonard Cohen.

‘Who By Fire’, the duo’s fifth release in just over a decade, preserves the magic of a live show they played in Stockholm back in 2017. Accompanied by Swedish artists, a full band, and a choir, the sisters paid tribute to the recently departed Cohen with a theatrical staging of twenty of his songs, from the familiar ‘Suzanne’ to deeper cuts and poems, breathing life back into his music without schmaltz or mawkishness.

First Aid Kit’s own lyricism is yet to reach Cohen’s poetic heights – but as the sisters themselves say in the liner notes to ‘Who By Fire’, “How does one write like that? One doesn’t, we suppose, only Leonard Cohen does.” Cohen’s music starts with the poetry: his lyrics are the basis of the greatness of the songs. The bulk of the work was done once he laid his pen to rest. But in the hands of any other, the production stakes are higher, and arrangement and instrumentation have a greater potential to crush the power of the words.

Nowhere is that clearer than in the varying successes of the thousands of interpretations of ‘Hallelujah’, a song that now dwells in a hall of mirrors, exposed and explored from every angle. The Söderbergs sensibly opt to keep things simple – their voices do the same heavy lifting as Cohen’s pen – and don’t burden the song with its history, so that it becomes just one of the album’s many instances of beauty.

‘Hallelujah’ no longer feels like it belongs to Cohen, but plenty of his songs still do. ‘Chelsea Hotel #2’ remains tightly bound to its creator – yet First Aid Kit’s fluid harmonies tease Jesper Lindell’s male vocals, taking the track to a different place. The duo stake an even more radical claim on ‘Famous Blue Raincoat’, re-clothing it in faster electronica so that it could easily belong to Suzanne Sundfør. Generally, though, tinkering keeps to a minimum, allowing the sisters’ voices and Cohen’s words to gleam through on tracks like ‘Sisters Of Mercy’ and ‘If It Be Your Will’. And if these songs are churches, the acapella ‘Bird On A Wire’ is a cathedral, in which their vocals vault and soar.

Unable to lean on First Aid Kit’s singing powers, spoken word pieces like ‘The Asthmatic’ are less successful: Cohen’s poems work best when lit by the glowing embers of his own voice. Few artists could simply speak alongside a metronome and create tracks heavy with lustrous feeling, as Cohen did in his final albums, including 2019’s posthumous ‘Thanks For The Dance’.

But a recitation of Cohen’s letter to his long-time friend and lover Marianne on her deathbed hits its mark, without falling into a saccharine trap. “Know that I am so close behind you that if you stretch out your hand, I think you can reach mine,” he wrote. A climactic, communal rendition of ‘So Long, Marianne’ follows these words, as all the artists of ‘Who By Fire’ take to the stage in a chorus of joy and grief.

After Cohen’s death in 2016, First Aid Kit wrote their own letter. They described his work as “a guiding light for us these past ten years since we started making music, both a consolation and an arrow pointing at where to strive.” ‘Who By Fire’ stands as testament to the Söderbergs’ love for Leonard Cohen, and the towering glory of his songs.