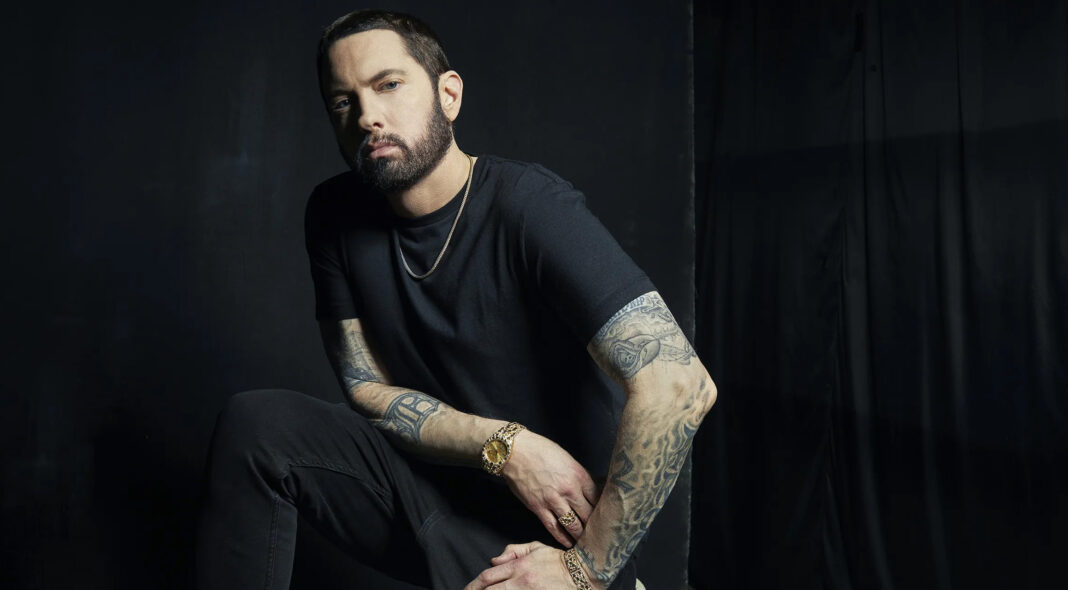 “Does Eminem dye his hair?” is the first question that springs to mind on watching the video for ‘Gnat’, one of the tracks on new album, ‘Music To Be Murdered By – Side B’, the follow up to his not-that-good January LP. In the video, underneath his hazmat hood, the rapper is firmly brunette, but there’s a suspicious lack of visible grey for a man nearing fifty.

As pop wrings out the decades, ageing seeps into the song-writing of many artists. This year alone, Bob Dylan looked for immortality in Key West, Bruce Springsteen partied with ghosts, and Conor Oberst catastrophised his fortieth birthday. Meanwhile Fiona Apple, the angel at the top of many end-of-year album lists, recently said, “I’m so glad I’m 43 and not 22!”

I’m not so sure Eminem is glad to be 48. “That 5-0’s startin’ to creep up on me like a patrol car,” he mutters on this new set of tracks. Still, in an era awash with young rap talent, and in a genre where bright flames are often snuffed too soon, an older perspective ought to be worth hearing – after all, staring down the barrel of mortality is new ground for a relatively young genre.

Lately, Eminem’s attempted to stay relevant by staying controversial, in a patchy decade that’s seen the chaotic ‘Revival’, the homophobic slurs of ‘Kamikaze’, and the exploitation of the Manchester Arena bombing on January’s ‘Music To Be Murdered By’, the side A to this ‘Side B’. He’s been criticised of failing to keep up with modern rap, too caught up in himself, as if replaying his own Instagram story over and over and ignoring everybody else’s. He has an awful lot of self-pity for a multimillionaire.

He is the boy who cried surprise. Like all his recent records, ‘Side B’ is a surprise release that contains few of them, and a litany of Eminem standards: hairy balls, disses, apologies for previous disses, grouches about ghost-writers and mumble rap. Sonically, there’s little new to write home about. The lazy COVID-19 references won’t date well. The Billie Eilish nod is petty. He apologises to Rihanna for siding with Chris Brown in lyrics leaked last year, but not before the “sorry… not!” of “I know nothing is funny ’bout the Manchester bombing […] I could give the Boston Marathon a run for its money”.

But on ‘Higher’, he decides, “I’ve been around for a while now / Not sure if I have much left to prove… yeah I do, ha-ha.” Eminem’s still got drive, whether to resolve recent missteps or show he’s still best in the game. His declaration “I’m emptying my book of rhymes” sounds worryingly like he’s about to hit send on all his draft tweets at once, kernels of genius and bad takes alike. But actually, the track flashes with honest self-reflection (and a wink at the Simpsons meme frequently attributed to him): “What happened to Slim? He was no cap with the pen / He used to rap like the people his music was for / He was exactly like them / The dude who used to be poor, why can’t he tap into him? / Can’t use that excuse anymore / He’s mad at the wind, he’s in a nuclear war / With a cloud, he’s yellin’ at it again.”

He continues to yell at clouds, though, on ‘These Demons’, ‘Tone Deaf’, and ‘Discombobulated’, obsessed with what people say about him. You’d think, being Eminem, you wouldn’t need to worry, and that’s the point – his talent should keep him relevant and relatively free of insecurity. “I’m an OG, I’m like the G.O.A.T,” he boasts on ‘Gnat’, arrogant but correct. Like or loathe him, twenty years on he can still “shit it better than ninety percent of you rappers out can”. Crisp, athletic delivery continues to mitigate his immature ego: his grasp of wordplay surely earns the respect and delight of any poetry nerd. “I used to wonder where my next meal’s gonna come from / Now I just wonder where my next mill’s gonna come from,” he quips on ‘Book of Rhymes’, toying with the same format on ‘Zeus’ with, “Used to have to sit and watch them bills pile up / Now I just sit back and watch them bills pile up.”

After all of this, ‘Side A’ returns like a second chance for listeners to assess Eminem, in light of the self-evaluation on ‘Side B’. This year Fiona Apple said, “maybe you can write songs about yourself for ever because you cycle through the same things over and over but you’re seeing it a little more clearly every time.” On ‘Side B’ there are moments of such clarity strewn among the usual rubble. Eminem might be getting older but he’s not going gently – he’s sticking around to commit his time to verse, crying surprise until one day a real surprise might show up. Like a grey hair, perhaps.