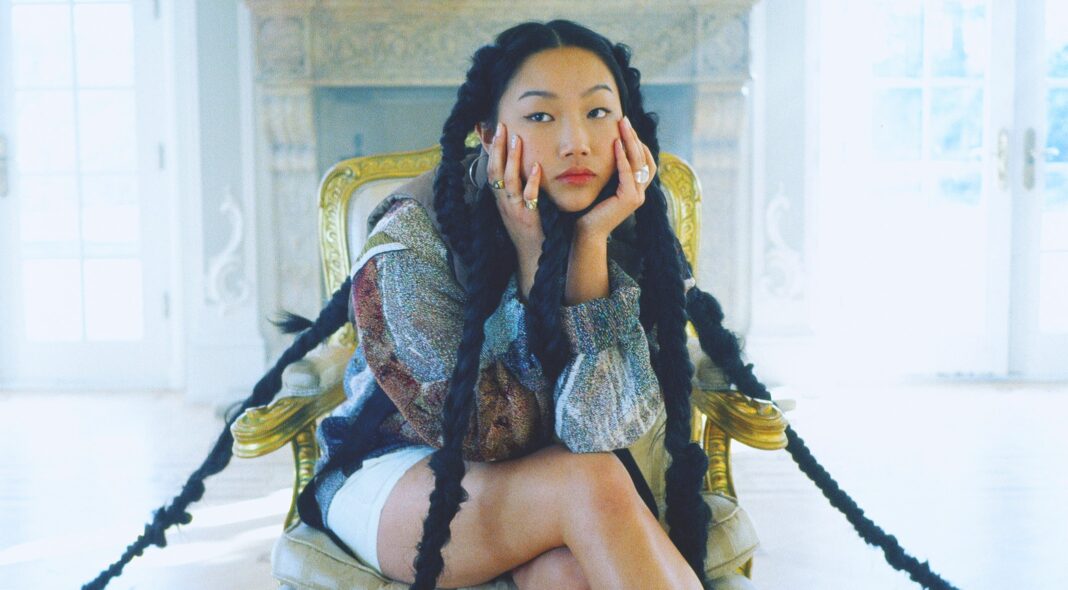 Audrey Nuna describes ‘a liquid breakfast’ as her journal from the past eighteen months – but it’s no dull pandemic diary. “There’s a lot of different sounds and sides of myself I’ve captured and collected over the months I was driving around the suburbs of Jersey,” she says. She’s not kidding about all the sounds and sides. The project – her first release – showcases her jack-of-all-trades musical ability, lurching from r&b and hip-hop to bubblegum trap, soul, and a smattering of pop.

Growing up in suburban New Jersey, the Korean-American artist took music lessons as a child and even sang at the US Open tennis tournament. But it was her homemade Instagram clips that caught the eye of producer Anwar Sawyer, and they began to make music together. Audrey used a PowerPoint presentation “with cute fonts and pie charts” to convince her dad she should take a year out of college. And if you’re going to drop out of the prestigious NYU Clive Davis Institute, do it in order to sign with the record label founded by the same guy: Audrey signed to Sony Arista in 2019.

Her creative ambition extends beyond music to fashion, food, and film (she already co-directs her own striking music videos). But even within her music, she keeps all the plates spinning. ‘a liquid breakfast’ assembles some of the smash hits – ‘damn Right’, ‘Comic Sans’ – that have nudged Audrey’s name into many “ones to watch” lists, together with short teasers and new earworms like ‘Baby Blues’ and ‘Top Again’.

To call the set of songs a “project” signals the continued disintegration of musical formats, but ‘a liquid breakfast’ is significantly not an album nor an EP. It’s an informal missive from a young artist introducing her talent and establishing her sound and style, rightly uninterested in being boxed in by genre or medium any time soon.

The informality fits the ten tracks which, true to Audrey’s word, often feel like a journal. References are often reassuringly ordinary: Ed, Edd and Eddy, Freddie Mercury, Whole Foods, cough syrup, brat dolls – her own grandmother even chimes in at the end of ‘Blossom’. Her taste for Japanese anime and fiction books seeps through, too, despite the project’s cool sheen, and Audrey’s fleet-footed flow and spiny self-assurance.

Any lack of focus is redeemed by her obvious versatility: the digi-vocal gymnastics of Caroline Polachek on ‘Get Luv’ and ‘Long Year’, a very Tegan and Sara delivery of “oh so typical”, the playful pop wink of early Marina, and the r&b magic of Deniece Williams. Elsewhere, ‘Space’ does wounded yearning as ably as Lana Del Rey, Audrey stretching cat-like around lines such as “I shot the valet, he parked in my space” and “Sick of the cinema, I’m burning Hollywood”.

‘a liquid breakfast’ ends with the sentiment “it’s been a long year”, as any journal from the past few months would probably conclude. While not a fully-realised nor focused full-length, the project provides a deserved home for some of Audrey’s year-defining singles, and shows off her future promise. It’s a refreshing reminder that creative inspiration exists during even the most discouraging of times: a long year, but a fruitful one.