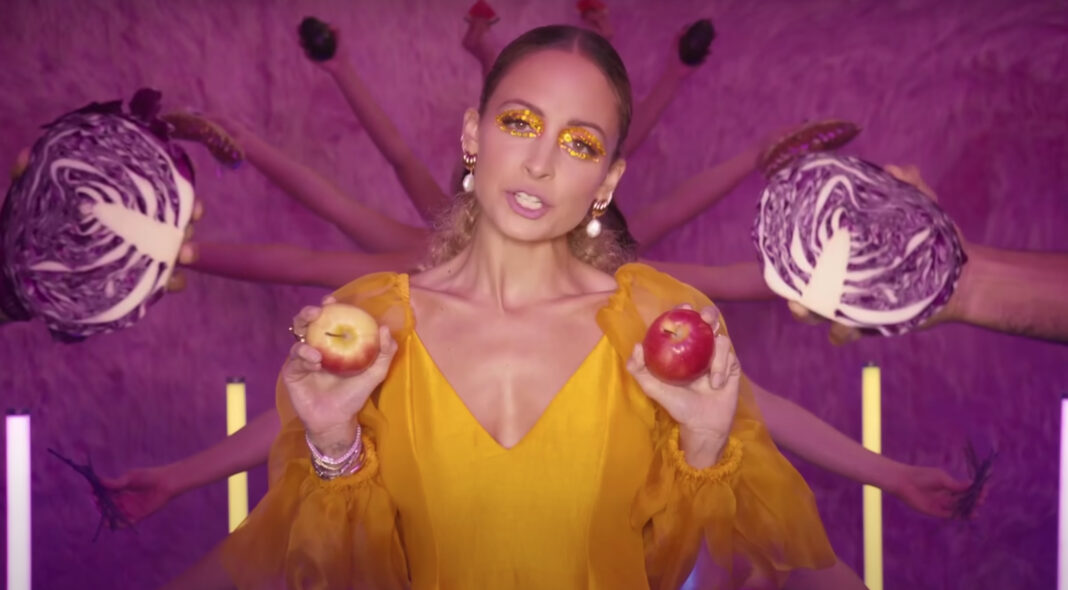 For any of it to make any sense at all, we need to rewind to earlier this year, when Nicole Richie launched a show through new streaming service Quibi called Nikki Fre$h. The show, a series of six very short episodes, is ultimately a vehicle for the comedy album that Richie felt she had in her. The first episode sees Richie, dressed in a full gown, consulting with husband Joel Madden’s (of Good Charlotte) management company MDDN to construct an alter ego, Nikki Fre$h, a heightened version of herself. In a send-up of wellness culture but also Richie herself, Fre$h writes “conscious trap” about the environment, crystals and bees that’s mostly for “moms and gays”.

The full album, which dropped at the weekend, is aptly named ‘Unearthed’. Made up of seven tracks interspersed with six comedic voicemails, ‘Unearthed’ is sparse, but it sees Richie tapping into her genuine talent for comedy and self-awareness that’s most apparent in 2003’s The Simple Life and 2014’s VH1 show, Candidly Nicole. True to form, ‘Unearthed’ opens with a voicemail from dad Lionel Richie, begging Madden to dissuade his wife from her new career path.

Speaking to Variety earlier this year, Richie said, “I can’t do trap. I have too much respect for the genre. I can’t just bop my way in there. So I’m going to create my own genre, which is parent trap, which is music for people my age.” On the first album track of the same name, Richie raps about mum stuff over a dirty trap beat: “The kids don’t got school today, it’s time for them chores, then go do your homework, cause I know you got more”. The “Skrrrt” sounds echoing in the background – a knowing nod to SoundCloud rap – provide extra comedy value

The other tracks mostly lean into the wellness-oriented “conscious trap”, another genre that Richie coined for this record. On ‘Bee’s Tea’, she raps about bees dying out: “I hold my bees up/ like a goddess/ they makin’ mad honey/ these bees is flawless”. She somehow turns it into a full-blown bop with a catchy, sung chorus, evoking elements of Princess Nokia and even Kreayshawn.

Fre$h covers a lot of ground with silly, ethically-focused tracks: ‘U.G.L.Y’ is a track about not throwing away misshapen fruit and veg, while ‘Drip Drip’ is a meditation on the importance of access to clean water. The songs are accurate and funny, but most importantly, they prove that it’s impossible (or pointless) to satirise anything without being actually good. Nikki Fre$h sounds like a few female pop artists, but her closest comedy sibling is maybe rap parody group The Lonely Island. Considering they’re as good as it gets in that world, that’s high praise.

‘Unearthed’, and Nikki Fre$h, could have felt like a mockery of rap and trap music in lesser hands. But rather than punching down, Nicole Richie looks inward, mocking herself and her own relationship to music, environmentalism and spirituality. Nikki Fre$h is a wife and a mum who just really loves nature, and the punchline is only ever her, or this exaggerated version of her. That self-awareness is epitomised on ‘Lil Gems’, a sharp track about crystals with a Lady Gaga-style chorus in which she lists off gems over a beat, repeating “feel the power of the gems start to cleanse”. No one – not one person – has ever made crystal healing either funny, attractive, or something you might want to dance about at a club very, very soon. Until now.

‘Unearthed’ is often daft and rarely boring, and through Richie’s lens, the topics it satirises are explored with love. While the songs are bops on their own, the album is made greater by interspersed voicemails of friends trying to lure Richie away from the rap life. Featuring a raft of cameos including sister-in-law Cameron Diaz, Mila Kunis and even Mumford and Sons’ Ben Lovett, they serve as valuable reminders that Richie knows exactly what she’s doing. What’s more, she’s very good at it.