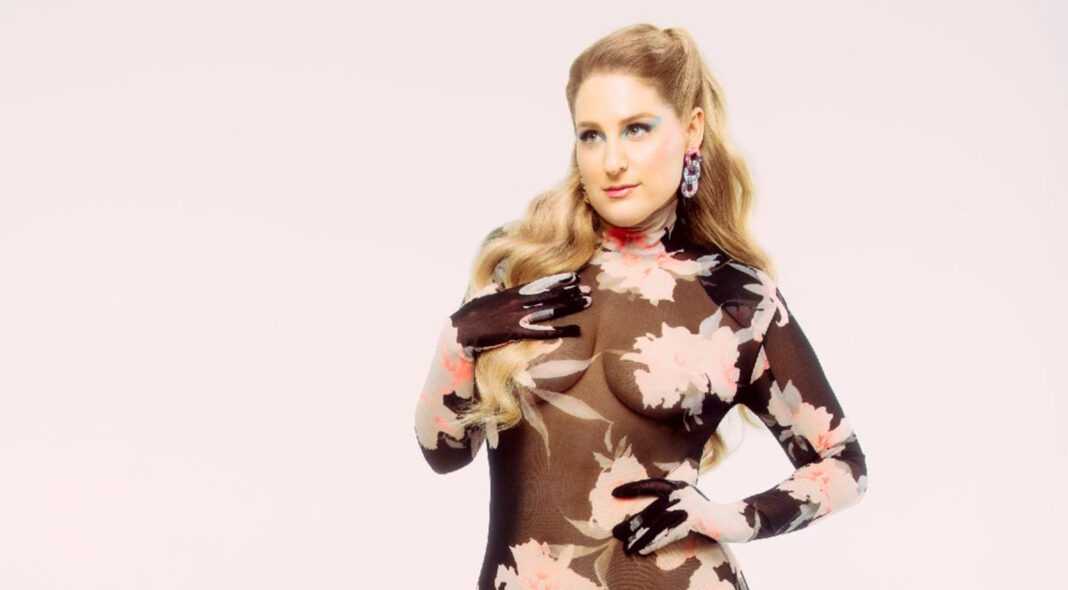 For music fans, Friday 21 October was undoubtedly the biggest release day of the year. With big new albums from Arctic Monkeys, Taylor Swift, Carly Rae Jepsen, Architects, Loyle Carner and more, there was plenty to keep up busy, unpicking complex musical themes and easter eggs like our lives depended on it.

Meanwhile, however, another pop gal was quietly pulling rank, broadly unacknowledged by the traditional music press. Her name is Megan Trainor, and in 2015, she was one of the most talked about — even controversial — popstars of the moment, enraging and enthralling fans with her retro-styled, doo-wop chorus line take on pop music. In 2022, with the release of her Fourth album, ‘Takin’ It Back’, she proves that she is committed to business as usual; whether you’re paying attention or not, she is staying put.

Trainor’s path to success has long been marked with controversy. When her breakout single ‘All About That Bass’ dropped, it was in the middle of a significant era for fourth-wave feminism, where women were cottoning on to the idea of feminism for all, where everyone is accepted and nobody is shamed for either adhering to or directly challenging traditional beauty norms. Ostensibly a display of empowerment for bigger women (“Yeah, it’s pretty clear, I ain’t no size two / But I can shake it, shake it, like I’m supposed to do”), Trainor was perceived to be ‘skinny shaming’, exerting her own smug authority as the figure that “boys want”; “I won’t be no stick-figure, silicone Barbie doll… I’m bringing booty back/ Go ahead and tell them skinny bitches that.”

Debate raged on for weeks in the press, and Trainor was vilified as the problematic face of white feminism, not entirely helped by her follow-up singles ‘Lips Are Movin’’ and ‘Dear Future Husband’, accused of both ‘blaccenting’ and negative reinforcement of patriarchal gender roles.  Blinking in the lights of new attention and her own self-confessed naiveté, she doubled down further, revealing in interviews that she didn’t understand feminism, or had any desire to vote in US elections.

Here in 2022, even a quick scroll of Twitter will reveal that Trainor has never really been able to fully outrun this image of the mindlessly-derivative starlet. Accused of ‘cringey college acapella’, being ‘the female Michael Buble’/‘TK Maxx hairspray music’ or even, most pithily, ‘segregation music’, her retro style pisses a lot of people off, feeling that is regressive and uninspired in comparison to her peers. On a recent ‘Ask Megan’ Twitter Q&A to promote her new album, her replies were flooded with tweets from Britney fans, unimpressed that Trainor still appears to be working with Lou Taylor, the manager who was responsible for establishing Britney’s conservatorship. Others simply cannot move past Trainor’s musical style, feeling that it is dated, or worse, genuinely regressive in a world where most are seeking to create a more widespan view of gender and sexuality relations away from the heteronormative male gaze.

Certainly, the perspective of womanhood that Trainor portrays might be considered traditional, and her frequent punchlines of impressing a man can be weathering, willing her instead to simply celebrate herself for her own sake. And yet, I posit that a singer like Megan Trainor is the perfect American embodiment of ‘hun’ culture; an artist who knows how to lean into her campy, cheesy housewife pop side, and doesn’t seem to mind that nobody is debating her creative genius. Cheerfully and doggedly releasing music despite the naysayers, she has found a way to persevere, steadily swelling a fanbase who do seem to love her exactly as she is.

Had Trainor broken through post 2018, she likely would have crumbled under her early critique. In 2015, the idea of being ‘cancelled’ was still only really parlance within the Black community, and hadn’t yet extended out into wider stan discourse, perhaps allowing her to persevere. But here in the UK at least, the hun is beloved for being slightly at odds with what is ‘popular’ or ‘trendy’; instead, she cuts her own ‘Live, Laugh, Love’ path through the world, cheerfully shrugging off the haters by simply “doing them”. A new mother and a master of down-to-earth social media, Megan Trainor has been steadily growing a TikTok following since the pandemic, drawn to her cute family clips, “am I right ladies?” moments and genuinely endearing (if badly lipsynced) enthusiasm for her female pop peers. At 28, Trainor is quite a young hun, but she still embodies the core elements of the culture; accessories that border on tacky, a penchant for musical theatricality, and good-girl Christian values. Like pumpkin spice lattes and Disney hauls and Jane McDonald At Sea, she is more than a little bit ‘basic’, but she leans into it, prioritising upbeat bops and a sunny-side-up disposition over state-of-the-world addresses or edgy ‘era’ concepts.

If you’re looking for a catchy tune with a dance routine that the average person can actually copy, Trainor may well be your gal. She describes ‘Takin’ It Back’ as a personal throwback, avoiding the R&B experimentalism of her middling albums and paring it right back to the shoop-shoop pop of her debut. Lead single, ‘Make You Look’ picks up almost exactly where ‘All About That Bass’ left off; the ponytails are high, the sequins are sequinning, and the glee club is well and truly open, with a chorus that lists all the material goods that she doesn’t need to impress. With her penchant for Jojo Siwa neons (not to mention that Candy Crush collaboration for ‘Made You Look’), it’s easy to imagine Megan Trainor being played at kids’ birthday parties without upsetting too many parents. Like Lizzo, she acknowledges the power of catering to this market, and works hard to split the difference with her own musical impulse.

There are some lofty misses. ‘Mama Likes To Mambo’, apparently inspired by the music she was brought up around via her Trinidadian uncle, is frankly cringe-worthy, the sonic equivalent of ‘experiencing’ the Caribbean via an overly expensive all-inclusive resort where the only Black folk are the staff. But elsewhere, she speaks with some emotional depth. ‘Don’t I Make It Look Easy’ describes life as an “overwhelmed boss-lady, bad-bitch mom”, while ‘Superwoman’ also struggles with the notion of trying to have it all, deeply relatable to many. ‘While You’re Young’, written with Harry Styles collaborators Kid Harpoon and Tyler Johnson, is a letter to her younger self, the sort of thing that will surely resonate with her new Gen-Z (or even younger) TikTok fanbase: “And it’s OK if you don’t like what you see/ You’ve only just begun and you’re good enough.”

If much of this sounds like a backhanded compliment, maybe that’s on us. The pop stars we love most are often the ones who consistently stand for something, who give us complex and intellectual work. And yet, it is also true that perhaps we forget that some music can work on a pure level of entertainment. With a critical hat on, there’s plenty about Trainor’s music or business management that begs question, but there’s also admiration for an artist who appears to know their own style and lane so well. Sometimes her message is patriarchally dubious, but more often, she is delivering accessible messages to communities often left overlooked; young working-class mums, church women, couples for whom more traditional gender relations do work. The hun does not stand for everyone, but she might feel like rare comfort to those who are so often left out or patronised by hipster music gatekeeping.

Just like bingeing a full series of ‘The Real Housewives’ or making that aesthetic ‘picky bits’ board for a night in with the girls, sometimes a touch of the inner basic is what we all need. It’s exhausting to be critical 24/7, and no artist is truly 100% good or bad. If Megan Trainor’s perky pop makes you feel even a little bit good, why fight the feeling? Dust off your diamantés, and get crushing those musical candies; lord knows that Megan Trainor would be the first person to cheer you on.