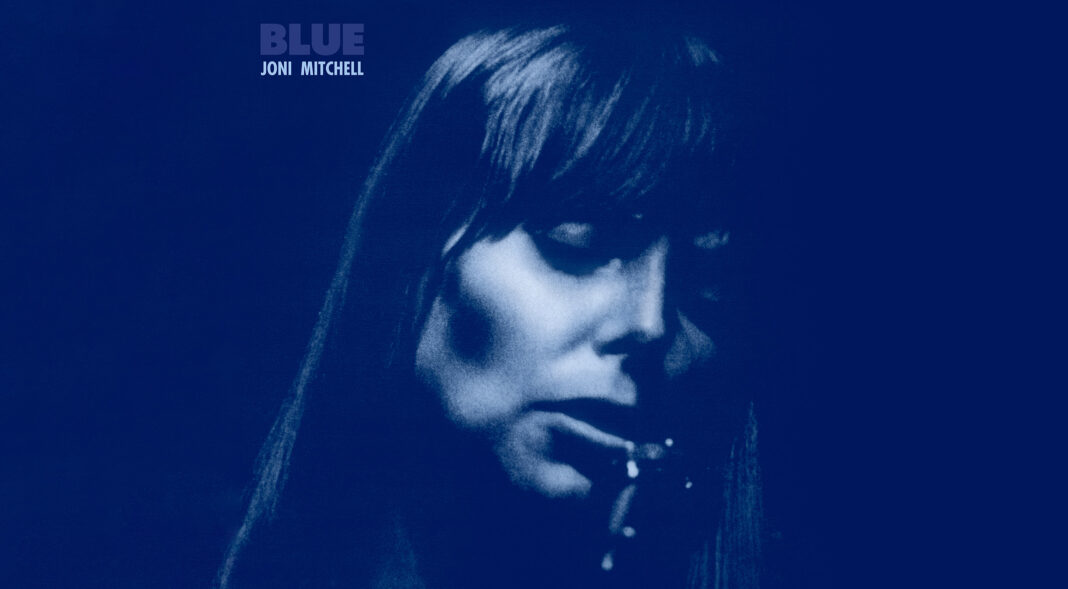 I imagined it was an obsessive, all-consuming love that Joni had for a man “as constant as a northern star”, long-rumoured to be the singer-songwriter, Leonard Cohen. It was easy to romanticise the idea of the two greatest Canadian poets as star-crossed lovers, sitting in a smoky corner of the Chelsea Hotel while Joni drew a map of their homeland on the back of a coaster. But to do all this was to ignore the clue she left at the very start of ‘A Case of You’: “just before our love got lost.”

It took properly falling in love – unrequited and “bitter and so sweet” – and falling out again, to understand what it’s like to be intoxicated by the mere presence of someone and then one day, find you’re sober. I still find that image romantic but now I can hear her pain when she launches into ‘O Canada’. I can hear her barely concealed snark in the line: “if you want me, I’ll be in the bar.”

Joni was my age when she released ‘Blue’, the 1971 masterpiece record that turns a remarkable 50 years old on June 22. At 27, she was beginning to enjoy success and fame thanks to ‘Ladies of the Canyon’ and ‘Woodstock’ but it was overshadowed by a deeply tumultuous period in her personal life, a moment where she had no choice but to lay everything bare.

“The ‘Blue’ album: there’s hardly a dishonest note in the vocals,” Joni said in an interview with Cameron Crowe in 1979. “At that period of my life, I had no personal defences. I felt like a cellophane wrapper on a pack of cigarettes. I felt like I had absolutely no secrets from the world and I couldn’t pretend in my life to be strong. Or to be happy. But the advantage of it in the music was that there were no defences there either.”

The result is a record of unparalleled authenticity, one that can feel too close and might compel you to look away. Upon hearing the album for the first time, Kris Kristofferson reportedly responded: “Joni! Keep something to yourself!” Was it possible for Joni to give up so much through song, without losing a part of herself? ‘A Case of You’ is unbearably intimate at times (only the two of them should be privy to a line like “love is touching souls”) but it is in very good company: the tender imagery of ‘All I Want’ and “I wanna shampoo you”; the story of Joni giving up her daughter in ‘Little Green’ – sad, sorry but not ashamed; and a love song to her own depression on ‘Blue’.

This poignant lack of restraint made it inevitable that ‘Blue’ would sometimes be reduced to the backdrop of a soap opera, where people speculate about the men in Joni’s life (Graham Nash, James Taylor, Leonard Cohen) and which one inspired which song. Human propensity for gossip notwithstanding (plus our desire to mythologise our greatest artists like Greek Gods), why is ‘Blue’ treated this way when the work of those same men is not similarly scrutinised for mentions of Joni? Taylor Swift might have an answer for that.

‘Blue’, alongside ‘The Miseducation of Lauryn Hill’ and Carole King’s ‘Tapestry’, is a rare example of an album written by a female artist that is still permitted into the boys club of ‘Greatest Albums Of All Time’. Too often, critical acclaim came with that patronising qualifier – the greatest female album of all time. But so few – male or female – could compete with Joni’s singular ability to distill a feeling in a song.

Many have tried to emulate ‘Blue’ with varying levels of success. When Ben Platt’s version of ‘River’ featured in the Ryan Murphy series ‘The Politician’ and introduced a new audience to Joni’s music, the internet’s characteristic gatekeeping ensued. The idea that there is an embarrassing way to discover great art is embarrassing in itself: if some people have yet to listen to Joni or ‘Blue’, I am frankly giddy and jealous that they get to hear it for the first time. I had first discovered her at age 11 through Love Actually, which is neither a cool nor compelling origin story but it is a genuine one. Vast swathes of that 2003 film haven’t aged particularly well but every mention of Joni remains perfect. I still think about Emma Thompson’s quietly dignified cry in her bedroom to ‘Both Sides Now’, a shade of vulnerability only the audience gets to see before she composes herself and her broken heart in the hallway. “Joni Mitchell is the woman who taught your cold English wife how to feel,” she says, prompting an eye roll from her husband. It’s hard to imagine a better teacher.

I briefly lived in Joni’s Canada when I was 20 and as I grew closer to ‘Blue’, she taught me how to feel, too. Just as I had found a new home in Canada, I fell in love with a record from someone out of place. From Mamma Mia-style love affairs with ‘Carey’, her “redneck on a Grecian isle”, to her longing for a river to skate away on, Joni – “a painter derailed by circumstance” – created landscapes that she didn’t quite fit into. It always surprised me when she called California home. To me, ‘Blue’ sounded like it was yearning for a way back to Canada. But I was already missing a place I’d yet to leave.

“I couldn’t look at people without weeping, I was just dripping in earnestness and sincerity,” she said, reflecting on that time of her life. “I realised a lot of people were listening to me, so they better find out who they’re worshipping, let’s see if they can take it, let’s get real – so I wrote ‘Blue’… When people see themselves in it the communication is complete.”

Any form of earnestness is terrifying, let alone “dripping” in it. Wearing your heart on your sleeve makes you feel so defenceless that you often forget how rewarding it is too. Whenever sincerity appears too great a risk, I think of Joni, of cellophane wrappers and her gentle plea at the end of ‘California’: “will you take me as I am?” If you can see through people, they can see through you too. If love is touching souls, so is music, and surely Joni touched mine.