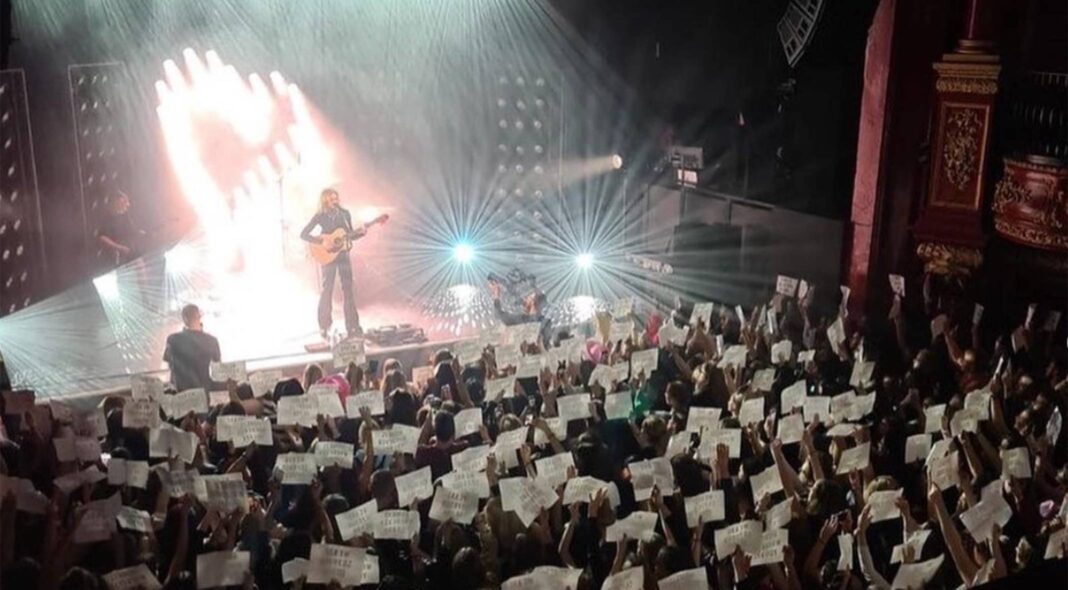 The day of the concert has finally arrived. You’ve got your tickets, lightstick and phone, and are ready to dance the night away to your favourite act. As you enter the queue, somebody slips you a piece of paper; it may be a piece of coloured tissue, it may be a list of instructions, an A4 sign surreptitiously folded so it’ll get past security. Are you about to be initiated into some kind of cult? Possibly, but it’s not the kind that you think. This is fandom, and you have just become part of a fan project.

With early origins in both K-Pop and western music, fan projects are fast becoming common practice at concerts, particularly in the pop realm. Put simply, they are grassroots fan-led initiatives to make something ‘special’ happen at a show, or to communicate a message to the artist onstage. A common fan project is to light up your phone in a certain colour for a certain song, or to all pull-out poster messages that bear the same sentence, usually some kind of pun or reference to a particular moment in the artist’s set. Capturing a sense of emotion and enduring support, fan projects work because they are more than a lone banner or a singular bid for attention; they are a way to communicate a mass message, often involving quite significant effort on the part of the organiser.

Sara, 19 from Chicago, is one of those fans. A fan of K-Pop group EnHyphen since their reality TV show rookie days, she wanted to do something special to mark their recent trip to the US. Inspired by their song ‘Polaroid Love’, she recruited her cousin and close family to produce endless polaroid cut-outs, distributing them amongst her fellow concertgoers.

“We spread a lot of information all over social media beforehand, and we included instructions with all of the Polaroids we passed out,” Sara explains. “We didn’t have early entry inside, so we arrived at the venue at 5 am to pass them out to people waiting. We did the project to show our gratitude towards the group, but it was equally about having the fans come together; we’ve all seen them grow and come so far as idols. And they did notice the project; they had us all re-sing the song and saw it was us who organised it. Seeing them react was so exciting; almost a month later it still feels very unreal.”

Other fan projects do of course take place year-round – tribute videos, anniversary posts, crowd funders, chart-race initiatives – but it is the concert projects that perhaps feel most special. With a specific date of physical collectivity to aim for, fans can organise via social media, coordinating their efforts and deciding which songs or colours they wish to utilise. Increasingly, Discord has become an important tool as well as Twitter or Instagram; fans, who maybe don’t want to organise but do want to be involved can search for an event in their city and make some new friends in the process. Projects are normally pretty low-cost and accessible, but can have an especially huge impact when they’re really creative; the Harry Styles boot-scoot dance, for example, wasn’t necessarily a traditional fan project, but has spread so far on TikTok that even Lizzo was spotted joining in at a recent concert.

For pop newcomer DYLAN, being on the receiving end of a fan project is quite an overwhelming experience. “There’s a song on my mixtape called ‘Home Is Where The Heart Is’; it’s always terrifying to play live as it’s so raw and personal, about feeling lonely and like you don’t really have anywhere to call home.”

At a recent London headline show, DYLAN was nervous to play it; she kept her head down, plucking out the opening chords of the song. When she looked up, the venue was a sea of posters, held aloft to cheer her on. “I was trying to hold it together because that show was filmed, so I couldn’t not sing,” she laughs. But to see that many people, holding signs that were like ‘we’re so proud of you’ and ‘home is wherever you are’, I just got offstage and burst into happy tears. I spoke to a lot of fans afterwards who organised it; they’d been running around London all day trying to find printers, one of the girls got kicked out of the venue for bringing that many pieces of paper in but managed to sneak back in. It was just surreal. It’s been amazing how happy I’ve been to be stood in front of them all and play that song, knowing that I have basically found a home within them.”

Although the level of dedication and connection that a fan project can show is incredibly sweet and affirming, a sceptic may say that fan projects are just another way of driving divisions; between those who want to be noticed and those who simply want to enjoy the gig, between the fans who have time to organise and those who don’t, even fans who have competing ideas of what a ‘good’ gig project should look like. If not organised properly, projects and trends can generate a huge degree of waste (imagine how many cheaply-dyed feather boas were discarded after the Harry Styles shows?), or even create situations that are quite dangerous. What might happen if fans surge towards the front too quickly in their eagerness to hold up a sign, or if too many slippery letters are thrown on stage? Health and safety aside, what about the crushing disappointment that occurs when an artist doesn’t notice your project at all, or when a venue crack down on people wandering around seated venues spreading notes?

For Taylor Swift fans, Dani and Julia, seeing the potential pitfalls of fan projects led them to come up with something even more creative. Each inspired by a lyric from new ‘Midnights‘ song ‘You’re On Your Own Kid’ (“So make the friendship bracelets, take the moment and taste it”), they decided it would be fun to focus less on attracting Swift’s attention with a project, and more on fostering a positive feeling between fans on the upcoming Eras Tour.

“I’ve been a Swiftie for a really long time and I like to think I’ve been a part of almost all the fan projects, even in just a small way,” says Julia, 22. “During the 1989 tour, I was part of the “squads” and would make Tumblr posts constantly trying to get noticed by Taylor; spoiler alert, it never worked. This is the first project I’ve been partially in charge of that’s actually had some traction; I liked the idea of making and swapping bracelets with other fans at the show. I posted the idea on TikTok not expecting much, but the video blew up, and a ton of people were telling me that someone else had the same idea. So I reached out to that account, and Dani and I have been collaborating ever since.”

“For me, it’s about feeling like part of a community. During the Tumblr era, I noticed a ton of toxicity; people were using each other to get noticed, and you really only counted as someone if you’d met Taylor at least twice. I’m hoping this project brings the community together in a more loving way since its foundation is about sharing this collective experience rather than getting noticed.”

“On a personal level I wanted an excuse to make friends,” adds Dani, 24. “I was in a lonely patch in my life and decided I should take charge and reach out to people. This is my first fan project, and we’re still figuring out what’s OK – we thought tags with info on seats would be really cool, but some stadiums count this as soliciting. We’re hoping that by the time the concert rolls around we’ll have any and all details figured out so people can just enjoy the night, swap some bracelets and hopefully make some friends. Concerts have such a euphoric feeling, and this is about just adding to that.”

As always, fans play a fundamental part in shaping the industry. There is so much that brands could learn about this level of invention, community, and organisation that fans utilise to make these projects work, not least the willingness to reach out and unite with total strangers through the love for the same artist. For any who experienced a successful fan project in the flesh, it can be a real sign of how deeply music touches lives, how we all play a part in that special atmosphere. The artists themselves are cottoning on too; as anyone who has been to a Coldplay show can attest, intelligently-programmed light shows or eco- ‘fan power’ electricity projects not only draw huge media attention but allow people in even the cheapest seats to feel truly valued as part of the event. In the last few years alone, fangirl-founded apps like Color Crowd and Lightcert are also getting in on the action, making it easier than ever to ‘light up’ a show in unison on your phone. But there is something about the handmade, truly heartfelt version that still feels most resonant. To the artist onstage, it may even be the thing that keeps them going on a rough day.

“As an artist in this industry, it’s really hard to know whether you’re doing a good thing; whether you deserve to be there, whether it’s working, whether anyone’s happy about your music.” says DYLAN. “It’s very hard to know where you stand, especially when it’s early days. But when people do things like this for you, or they make the photo albums and send you messages, it’s just that reassurance of like, yes; you’re exactly where you need to be.”

READ MORE: For the Eras Tour, Taylor Swift has taken #squadgoals to the next level