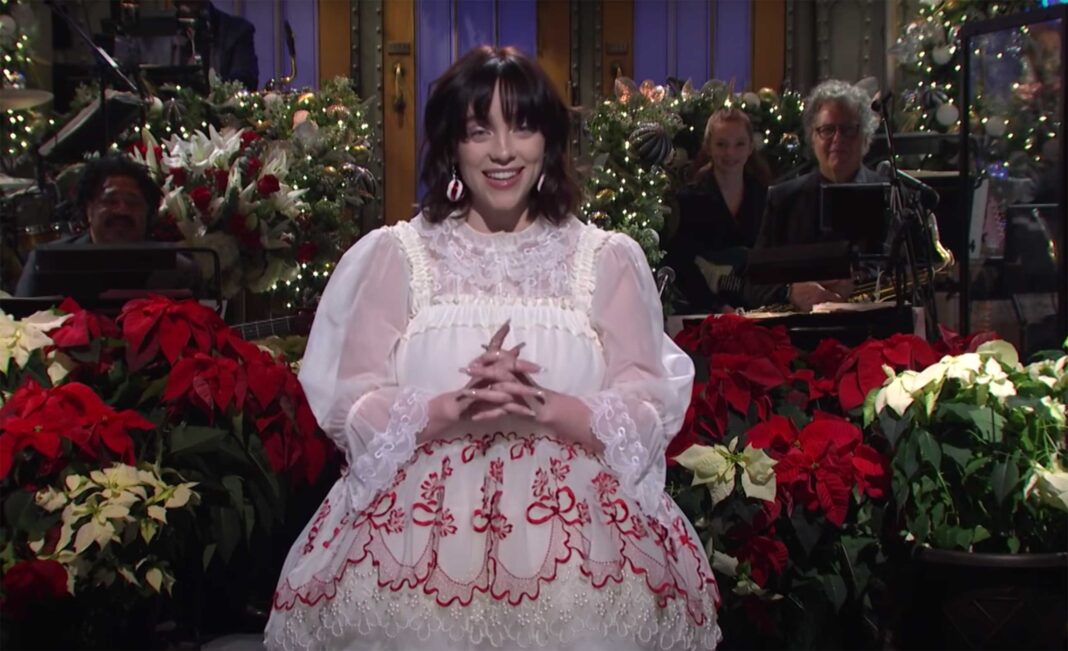 On December 12 2021, Billie Eilish returned to Saturday Night Live, her first time as the show’s host, and absolutely crushed it. In an interview with Howard Stern she admitted to being so nervous to host she was sick and “got the shits” ahead of the show, that saw her perform in multiple comedy segments and also take a turn as the show’s musical guest. She is only the 38th person in SNL‘s 46 year history to take on both duties on the same night.

Below, watch Billie’s opening monologue, all of her sketches, and her two stunning musical performances with brother, Finneas, who also popped up in some of the skits, too.

Billie’s opening monologue made digs at Colin Jost and her mum, for favouring Finneas.

In ‘Hotel Ad’, Kate McKinnon and Billie Eilish parodied a hotel promotional video with a spot-on, deadpan delivery. At a couple of moments, Billie breaks, giggling at the auto prompter, but she pulls it back around and makes it through the skit.

In ‘Lonely Christmas’, Billie parodies heartstring-tuggy Christmas adverts, when she invites an elderly widow for Christmas with her family. Only to find, there may be a very good reason she’s spending it alone.

In TikTok, Billie Eilish is a twerking nurse, neglecting her duties while her patient flatlines.

In ‘Santa Song’ Billie plays a chanteuse who ‘made things weird with Santa’ on meeting him. Kate McKinnon and Ego Nwodim are her backing singers.

In ‘Kyle’s Holiday’, Kyle is desperately trying to find a 30 Rock co-worker to spend Christmas with. Billie reminds him that Christmas is about more than just December 25th.

In ‘Christmas Cards’ Billie appears as Harper, the high school frenemy who sends a Christmas card to the girl she picked on to make her jealous of her actually-not-very-perfect life.

Not only was Eilish the host of the show, she was also the musical guest, performing ‘Male Fanstasy’ and ‘Happier Than Ever‘ from her album of the same name. Watch them below.

What did you think of Billie Eilish’s first time hosting SNL? Let us know in the comments below.