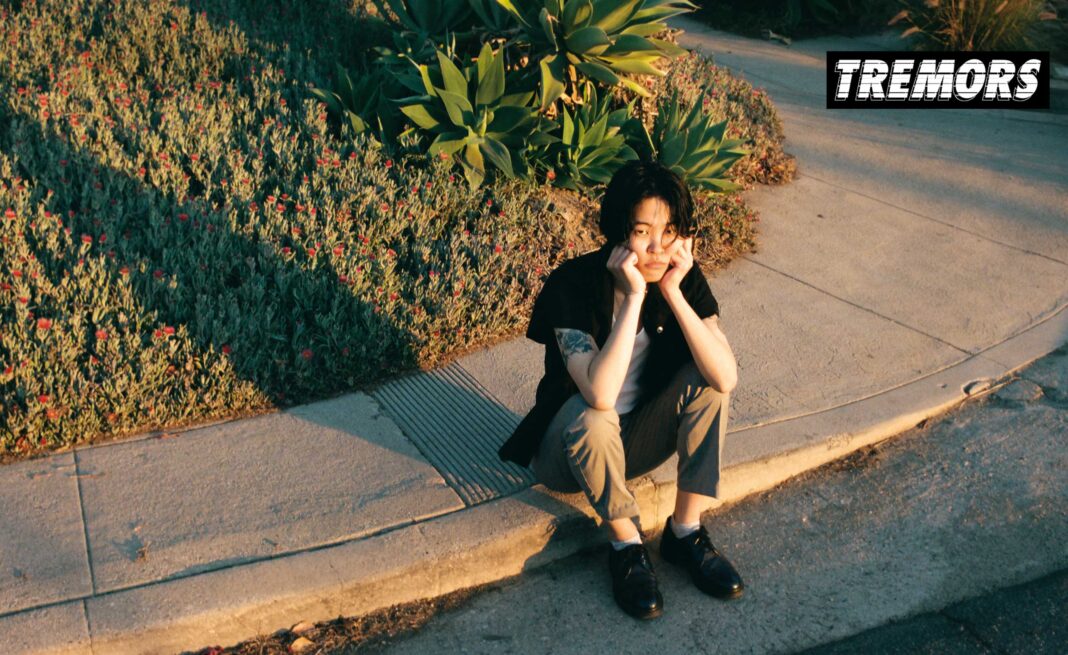 For Abby Hwong, the Chicago suburbs where they grew up were a place of comfort and claustrophobia, equal parts paradise and prison. This place, and more importantly, the life Abby created there for 16 years, is the subject of their debut album ‘Stay Proud of Me’, a largely self-produced record of their path to self-acceptance and rediscovery.

Growing up Korean-American in a predominantly white area, Abby felt like the only Asian person around for miles. “I had little sources of kinship with Asian people”, they remember. Abby wrote ‘David’, an upbeat number with a sunny guitar pomp, about the white American gaze as they saw it growing up – from the outside looking in. The song was inspired by the summers Abby spent hanging out by the “community pool” and dreaming of the statuesque, beach blond lifeguard on duty. “All American boy with a gorgeous pointy nose”, Abby sings, “she watches him, pinching her own”.

“My memory of how he actually looked is so foggy”, Abby explains. “In my head, he’s just a lump with blond hair and muscles. But the Eurocentric beauty standards were ingrained in me since I was a kid. I thought he was the most beautiful boy I’d ever seen.” This poolside scene, too, was far from picture-perfect. “Kids at the pool would do slant-eyes at me and my cousins”, Abby recalls.

Although they stuck out as a target, Abby still yearned to be seen, to attract real attention and affection. Sent away to Korean sleep-away camp one young summer, they remember dancing with a boy for the first time. “That was my first experience of feeling desired and getting male validation. Even though I knew I was gay, I still craved that. It made me feel like I finally ‘fit into’ femininity.”

“My town has a reputation for having some of the meanest kids”, Abby says. “Mean Girls is actually based on my area. When the movie references a certain mall, or a ‘Walker’s Pancake House’, that is directly my town”. Working at the local coffee shop, Abby often overheard parents brazenly gossiping about other children.

Against this backdrop, Abby explores the idea of “suburbia” as a kind of set-piece for their musical imagination. The place is sticky-sweet, so picturesque it’s almost unsettling. Abby crafted the waxy and lilting ‘Suburbia’ from these formative memories, a song that cracks open the snow globe just enough to expose the cruelty in these darling vignettes of neighbourhood life. Abby sings of “quiet suburbia, rich kids and boutique drugs” on the track, observing as “moms power walk and gossip / about teenagers and bat mitzvahs”.

‘Stay Proud of Me’ has a cinematic way about it, an intimacy wrapped in a guitar-driven telescopic sound that holds the whole world. “I always want my music to feel cinematic”, Abbys says. “My first interest prior to music was movies. When I write an instrumental, I always imagine a shot of two people looking at each other or a montage of them doing things together.”

“My favourite music is always inherently romantic.” Longing and romance pervade ‘Stay Proud of Me’, whether the subject is lovers, memories and places, or Abby themselves. Abby trains their eyes, and the song’s focus, on their lover in ‘I Feel You’, beginning the track with masterful and nimble guitar plucking that opens into the light as Abby’s partner finally meets their gaze: “You feel my eyes while I watch you move slowly / Dancing through crowds, dancing”.

Guitar is the musical heart of ‘Stay Proud of Me’, a warm and fluid presence on every song. Abby’s musical education centred on guitar, and working on the album taught them to make space for other elements. “I went to music school with great guitar players, who were mostly cis-het men. Feeling the need to prove myself, I always played songs with complex guitar instrumentation like I was trying to say: ‘I promise I play guitar!’”

“‘Suburbia’ has an easier guitar part, and I was bothered by that for so long”, says Abby. “I’m trying to dig myself out of the mindset of having to prove that I’m a real musician by playing the busiest guitar parts ever, and instead just doing what suits the song.”

Abby produced and recorded the album at home in California at Covid’s peak, breaking up hurried takes while their parents “yapped on conference calls in the next room”. “I had a lot of imposter syndrome and embarrassment about calling myself a ‘producer’”, they say. “I felt like I needed the stamp of a cis guy’s production in order to be legit. But I pretty much play all of the instruments on this album – I essentially learned bass and piano for it. Realising this has given me more confidence. I’ve been doing it the whole time.”

The album’s opening and closing tracks, ’Parasites’ and ‘Everything I’ve Got’, are beautiful bookends to Abby’s journey with their own gender identity. “It’s your life / Take off the drag / The parasites removed from your skin”, they sing on ‘Parasites’ about undergoing top surgery. “So lovely to meet you again / So lovely to be born again”.

“When I started talking to my mom about gender issues, I tried to explain by saying: ’It feels like there are parasites in my body and I need to get rid of them’”, Abby shares. “I wept as I said it, and she finally understood what I meant.” The delicate synth swells and echoes, as the drums and Abby’s DIY taps on the guitar move the song forward “like a walk”. “I liked the juxtaposition of such a pretty and romantic instrumental against a gross thing like a parasite.”

‘Everything I’ve Got’ records a time when Abby was dealing with their “highest gender issues”: “I was 20 and finally starting to admit to myself that I wanted top surgery. I was also in a lot of pain about a situation, questioning if the person didn’t love me because I was trans.” The song starts quiet and builds quickly with heavy rolling drums into a crescendo, a  hopeful series of electric guitar flourishes. “I know it seems confusing when I yell and hide my chest / I know if I was born fairly I’d be it / But I love you with everything I’ve got”.

“It’s the song on the album that I wrote when I was youngest, around 20 years old. I took lines out of my journal. It’s almost emotionally immature – I’m projecting so many anxieties and insecurities onto another person, being like, ‘It’s my gender, isn’t it?’ I think it’s a nice full circle that the song I wrote when I was young about that painful subject ends, and that when you loop the album you start back at ‘Parasites’, where I’m not even concerned about romantic things and am working on myself. It’s healing, kind of.

Samia: “There’s a loneliness to feeling like your thoughts are too ugly” | Cover Story