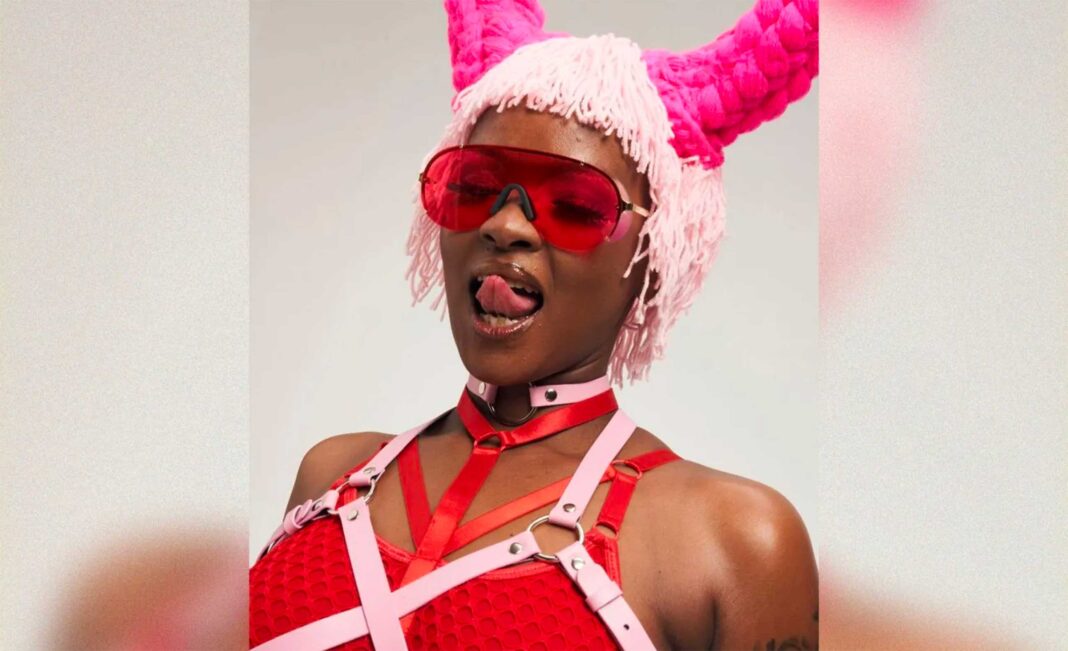 “Owning a vagina is just like an adventure sport,” Moonchild Sanelly says with a wry smile, “You need to know how to say ‘fuck you’ politely.”

The South African musician is providing a lesson on how to navigate the world as a strong, independent woman. Though she’s never had any trouble expressing her belief in female empowerment and sexuality, Sanelly is also acutely aware of what people expect a successful woman to look like. It’s exactly for this reason that she has been intentional in her portrayal of varying narratives in her new album ‘Phases’, emphasising the many different guises a successful woman can take. In 19 tracks, she documents the end of a toxic relationship and the freedom that comes with leaving, tapping into the notion of rebelling against what is deemed acceptable or conventional.

“Having been a rebellious person and then becoming a successful rebellious person – because I’ve always been a rebel with a cause – there’s no way I can ever go back to being told I’m a black sheep with no meaning because I know black sheep change the world,” she says. “In fact, they don’t want to call us geniuses; they want to call us something that makes us feel bad about being different and actually, it is what is needed in the world.”

Since establishing her signature sound, which she describes as “future-ghetto-funk”, Sanelly has worked with some of the biggest names in South African music, her unique musicality and work ethic quickly leading to her becoming tapped as a name to watch. Commercial success in her native South Africa with her first album ‘Rabulapha!’, along with collaborations with the likes of Beyoncé (she appeared on The Lion King soundtrack), Diplo and Gorillaz (‘With Love To An Ex’) and a feature on the FIFA 22 soundtrack led to her being signed to Transgressive in 2020.

“TOKiMONSTA lost her hearing, made an album, was nominated for a Grammy, got her hearing back. And she’s in my album. That’s some out of this world shit like, ridiculous.”

LA-based producer TOKiMONSTA was diagnosed with an extremely rare brain disease called Moyamoya in 2015, which led to the loss of her language and comprehension skills. She eventually regained her ability to understand music, which resulted in her 2017 Grammy-nominated album ‘Lune Rouge’. It’s the desire to persevere despite life’s hurdles that speak to Sanelly. “The show must go on, period,” she says. “A lot of people call things reasons. If they hold you back, I call them excuses. Reasons out your mouth, excuses in my ear.”

It’s evident from her passion and excitement that Sanelly has been ready and waiting to take on the world for some time. As ‘Phases’ proves, she’s firmly on her way to something bigger, exhibited by the certainty and tenacity of the album’s message.

“It’s overwhelming and it’s ridiculously realistic to a point where it definitely feels bigger than what I thought it was,” Sanelly explains when asked about the lead-up to the album’s release. “I knew I was gonna be great but what is happening is so scary. Honestly, it’s only when I take a shit I’m like, who the fuck are you? It’s the only time I even allow myself to think. I never allow myself because I get scared of the fact that the moment I celebrate, I might just get too comfortable and then I slack.”

Sanelly gives an insight into every facet of her personality in ‘Phases’, the album’s amapiano beats morphing from energetic electronic into downtempo pop and R&B as she allows herself to be vulnerable. We move from tracks like the Ghetts-featuring ‘Strip Club’; a lively love letter to women that hustle, to gentle piano-led closer, ‘Bird So Bad’; a meditation on the desire to escape. Even during this conversation, Sanelly occasionally allows the mask of confidence to slip to reveal her vulnerability, which only adds credence to her desire to amplify and lift up any and all women.

“I’m always a tough bitch but I think I’m actually very shook at the magnitude of the way things are happening,” she admits. “I definitely have been intentional but there’s never been a brief or a manual that comes with when you’ve achieved your goals, where it helps you deal with the overwhelming everything.”

As she readies herself in rehearsals for the release of ‘Phases’, she does acknowledge a difference in her sound and her attitude, partly linked to having the time to really sit with her emotions over lockdown.

“With my first album, I feel like one thing I talk about is observing vulnerability and not being the vulnerable one. And with this one – shout out to lockdown, shout out to Corona – I had a lot of time. Because I work so fast in the studio, I feel like anyone that works with me doesn’t think I ever need time, because of the fact that they know I’m just that quick. But if it’s that magical with no time, imagine what I could do with time!

“I’m so used to working quick, fast and there’s no time to process or go through the feelings because it’s go go go go go and with lockdown, it afforded me that privilege of being able to feel it, while going through a fucked up relationship in that moment. But there’s one thing about me, if it starts in tears or just acknowledgement of sadness, it never ends in sadness  – it ends in hope. Because the moral of the story is, I’m always a liberator and I’m generally like that in person. So I don’t acknowledge it for us to just sit and cry and do nothing about it. I acknowledge for you to know you’re not alone. There is a way forward.”

The end of this relationship was, in many ways, transformative for Sanelly, leading to her engaging with feelings that unexpectedly triggered her creativity. Ultimately, ‘Phases’ is an album that intends to speak to all women, whatever they may be experiencing or whatever path they choose.

“In this one, I highlight choosing to be a side chick and owning it. You don’t even have to use your words. I’ve got the whole script: press play, Moonchild’s got you. I’ve got a whole song about you paying for strippers at the strip club. Because remember when we began the conversation I said having a vagina is an adventure sport? So I celebrate women and fuck what society celebrates as success. You’re successful just breathing bitch. So I celebrate every type of person in this one, I celebrate every type of hustle because you know what? Fuck you for being judgmental. Because already we go through a lot to just shine.”

At the start of this Zoom call, before anyone appears on screen, the cover art for ‘Phases’ makes up the background. It shows four different versions of Sanelly posing boldly in striking outfits; four different sides to her character perhaps, but all with her trademark, flamboyant style. Sanelisiwe Twisha has always shined as Moonchild Sanelly but it’s not a mere persona; it’s her authentic self. Sanelly explains that she grew up in a household that encouraged expression so it’s always been natural for her to be exactly who she wants to be.

“I come from freedom; this for me is not a job,” she says. “And actually, for a long time, I was confused at how people think being yourself is confidence. And me being myself, being expressive, and also understanding people fearing me, because it’s not normal for them. But that’s normal in my household. This is normal to my children, they were birthed with a mum with the mop [her signature blue hairstyle]. So normalities differ and the world can change your perspective.”

Above all else though, she wants women listening to this album to understand their worth in this world and run with that feeling.

“You’re enough,” she says. “You’re motherfucking enough. Your choices are fully you. There’s no police for your body. On whatever your hustle is, you are celebrated. You are seen, you are loved, you are represented. And you are everything.”