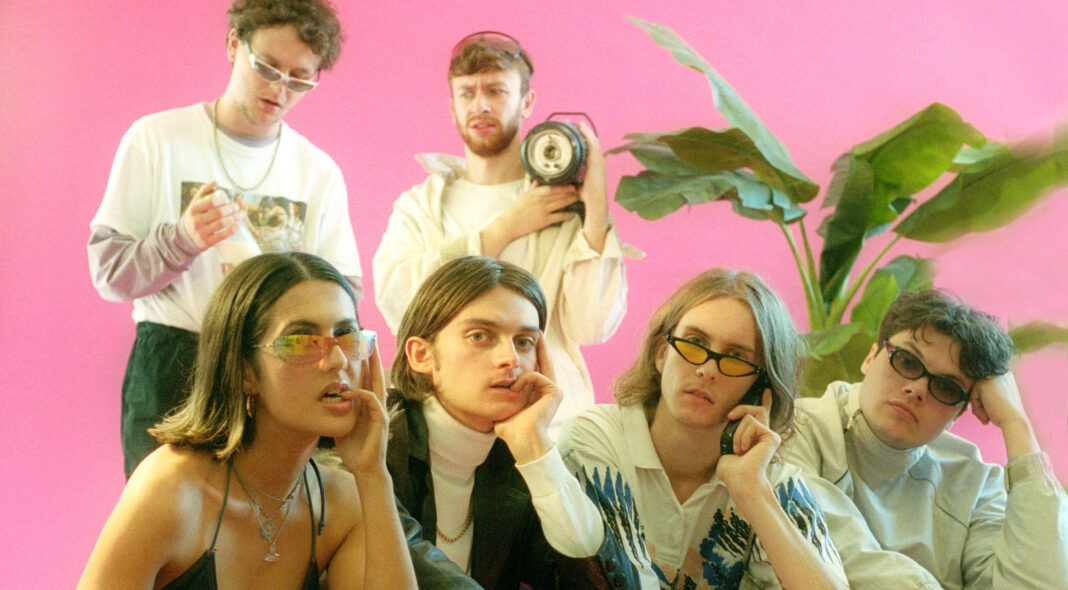 Manchester has long been the home of some of Britain’s buzziest bands and this year’s flaming hot tip comes in the form of alt-pop six piece, Mealtime, who have just dropped their really-very-good first EP ‘Aperitif’.

Mealtime have been making waves for a couple of years, in part due to their unique ability to flit from noughties trash-pop to big Kasabian energy within the space of one track. Their sound is DIY, fun and most importantly – when the world is down in the dumps – it makes you want to have a bloody boogie!

We caught up with Georgia Babrahani and Sam Craighan from the band to get to know Mealtime a little better.

How did you all meet?

Georgia: We all met at Uni. and now we can’t get rid of each other.

Sam: Keaton became our bassist because he was at one of our gigs and our bassist didn’t show up. He showed up half-way through the last song.

G: That was our second gig, supporting Working Men’s Club before they got really big. It was a really horrible experience. I saw our bassist walk through the door as we were half-way through a song. I was thinking: “Please do not walk on stage, please do not walk on stage,” and he literally walked on and started setting up behind us while we were playing. But it was the best thing that happened to us because now we’ve got Keaton who was in the audience watching and was like: “I’ll play bass for ya, because he’s obviously not gonna do that anymore”.

S: He got really drunk and then came over and whispered in our ear: “You did good but you could do miles better if I were with ya”.

You made your new EP ‘Aperitif’ in your bandmate Harry’s bedroom. What kit were you using?

S: Whatever we can find cheap. There are a lot of gear swaps on Facebook and stuff where you meet some absolute synthesiser fanatics. It’s like Top Trumps!

I had an old keyboard and I was a bit bored of it and so I posted it and said: “What would someone give us for this?” And instead of one really good keyboard, we got back five little bits of naff lo-fi gear – samplers and shitty drum machines that don’t really work and are falling apart – but it gave us our own sound.

G: The EP is like our little baby. To listen to it now, I think: “Wow, we wrote those songs ages ago” but it’s a nice thing that represents the start of what we’re doing.

You’ve described your sound as Y2K influenced. What is it about that era that appeals?

G: Part of it is that nostalgia thing. For me personally, I grew up listening to alternative pop music like Gwen Stefani and stuff like that. She was my idol.

S: I always hated that sorta shit when I was growing up, I thought: “This generic pop music, this isn’t cool, there’s not enough angst in it.” I was listening to emo rock like My Chemical Romance, punk music and later indie like The Strokes and The Libertines. When I got older, I got an appreciation for that sorta stuff. I thought we’d look back on everything that seemed trashy from that era and think “oh we’re never gonna touch that again, let’s leave that gelled haircut where it is and those horrible low-cut jeans…” and now everyone’s revisiting it. It’s half ironic, but it’s fun, isn’t it? It’s nice.

G: People like Rina Sawayama – who has approached it from a different angle from us, she’s put the nu-metal vibe into her music – does the whole fun, trashy but really alternative thing and we love it, we think it’s really cool. Even Dua Lipa’s new album has a lot of seventies disco but with a 00s spin, like Moloko and Royksopp and those alt-electronic bands channelled in the day.

Are there any early 00s deep cuts that you’re really into?

S: My favourite cheesy pop – not cheesy pop, cos that’s undermining it – is the Nelly Furtado album that Timberland produced. That’s really good. I didn’t give it the appreciation it deserved at the time.

Manchester has always had a really strong music community. Is some semblance of that still alive in Corona times?

S: I’m not sure. I’ve only been speaking to us.

G: On Instagram there are a lot of bands who are really trying their best with live streams.

S: Everyone’s going to come out of this lockdown with an album and we’re gonna be like: “Hold on, how good is yours?” The standard is going to be amazing because nobody’s had this amount of time to sit and work on their own music before.

Do you get competitive amongst other bands?

G: It’s what drives you. Everyone wants some kind of success and to be able to make a living out of it. That’s the goal, really. It’s really natural to look to other people who are doing well and think about how they’re doing that.

S: I get pissed off if someone I know has made me a really good record. And I feel angry for about two hours.

G: And then you realise you’re being stupid and they’re just amazing and that’s why they’re doing well! But yeah, it’s totally natural and when I don’t feel like that, it’s a problem, because I don’t feel as driven.

One of your tracks was used on Japanese reality show Terrace House. How did that happen?

S: I was so hyped when that came out, I watched the first season!

G: We didn’t even know and then we saw we were on some playlist of Netflix shows and it’s rally massive in Japan. I need to proper watch it. Apparently it’s kind of a semi-big thing there.

S: I read an article about it that said “watch this show where nothing happens”. I like that their version of Big Brother is that there’s nothing staged, it’s just watching people be candid and it’s really pretty like that.

You’ve got a song called ‘Excess’. What does excess look like to you?

G: I feel like I need a really good answer, it’s gonna be the tagline isn’t it. Quick Sam, come up with something!

S: Well if I had loads of money right now… I couldn’t be trusted.

G: Sam is awful with money. He’s a proper splurger.

G: Sam does this thing when he gets paid, he just spends it on loads of cigs and the most exquisite and expensive bits of food. He’ll come back with a really expensive bottle of wine and cheese from some market and I’m like: “Have you paid your rent, Sam?”

S: And I won’t eat for the rest of the week then. I have one good meal where I eat myself half to death then nothing.

G: I’d buy loads and loads and loads of Prada handbags. I love clothes more than anything. Music and clothes are the only ways I can express myself. I spend my whole time just scrolling through Depop at the moment.

What’s going to be your first night out when things open up again?

G: If you go to Manchester, it’s one of them places where everyone goes. You go in and everyone’s just there!

S: They’ll have a boogie night on on the first floor, then there’s a roof terrace, they serve food at the bottom. It’s always fantastic.

Mealtime’s EP ‘Aperitif’ is out now.